In general, economic downturns have a greater impact on young people in the labour market than on other age groups. How does the contemporary Covid-19 crisis compare to the global financial crisis a decade ago? A closer look at European countries reveals interesting insights.

Economic downturns tend to disproportionately harm young workers’ labour market outcomes. The Covid-19 recession is no exception. This crisis has magnified the negative effects on young workers in comparison to other age groups, due to a combination of labour market challenges. First, young people tend to work in industries and occupations particularly impacted by the pandemic such as retail, hospitality, and tourism. Second, they are more likely to have temporary contracts, which were negatively affected when the pandemic broke out. Third, young people were heavily affected by school closures and restrictions on training opportunities, which, alongside with social isolation, contributed to very low levels of mental well-being. Based on a scientific advice report for the European Parliament by Regina Konle-Seidl and Francesca Picarella from September 2021, this article summarises the effects of Covid-19 on youth employment and unemployment, education, and mental health in Europe. By comparing the impact of the current crisis to that of the 2008/2009 global financial crisis, it discusses the risks posed by long term negative impacts of early-career unemployment – so-called “scarring effects” – on individuals’ future unemployment experiences and career prospects.

During the pandemic, youth employment, unemployment, and inactivity developed in waves, reflecting lockdown and containment periods. Youth unemployment across European countries was particularly impacted in the second quarter of 2020 and again in the first quarter of 2021. The unemployment rate started to increase from above 15 percent in March 2020, reaching a first peak of nearly 19 percent in August 2020 and a second peak of 18.5 percent in April 2021 (see Figure 1). The (seasonally adjusted) rate measured by Eurostat has declined steadily since then. In August 2021, the youth unemployment rate was at about 16 percent, which was still higher than before the onset of the crisis. New labour market entrants in particular accounted for a large share of the rise in youth unemployment, as businesses revised or cancelled their hiring processes or decided not to renew fixed-term contracts. The increase was generally higher amongst young women than amongst young men (see Figure 1). 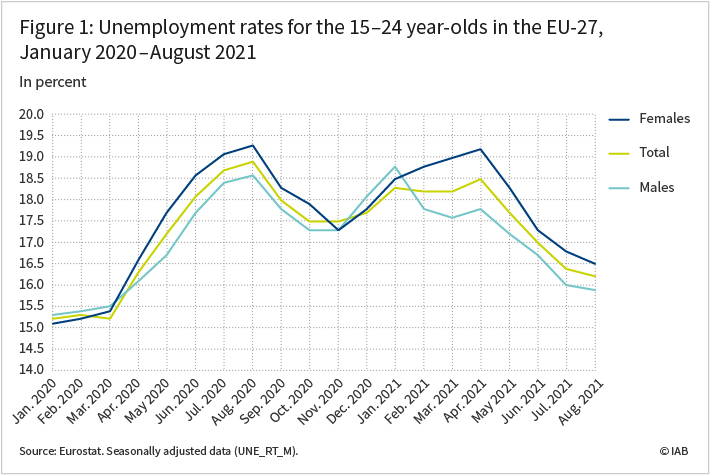 Before the onset of the crisis, youth unemployment had significantly reduced in nearly all European countries. In 2019, there were 1.9 million fewer unemployed in the age group 15-24 than in 2012. So far, the increase has remained substantially below levels seen during and after the financial crisis in 2008/2009. The wide variations in youth unemployment rates across Member States, however, persist. What is worrying is the fact that countries particularly hard hit during the financial crisis such as Greece, Italy, or Spain again saw an above-average rise in youth unemployment during the pandemic. In Germany, youth unemployment is generally low. At the end of 2019, the unemployment rate for 15-24 year-olds stood at 5.1 percent, increased to 8.3 percent in the first quarter of 2021 and decreased to 7.1 percent in the second quarter of 2021. The increase by 2 percentage points between the fourth quarter of 2019 and the second quarter of 2021 was slightly below the EU average increase (+ 2.6 percentage points) in the same period (see Figure 2). 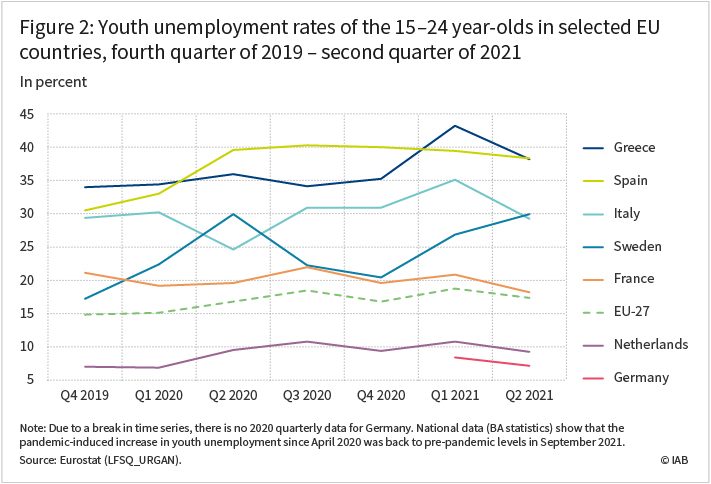 While Eurostat data do not yet provide a clear picture on whether the duration of youth unemployment will increase to become a protracted phenomenon, national register data for Germany, for example, show an increase in youth long-term unemployment by 12.6 percent between September 2020 and September 2021.

Young people “Not in Employment, Education, or Training” (NEET)

In contrast to previous crises, a feature of the Covid-19 crisis has been that there have been more transitions from employment to inactivity than to unemployment across all age groups, meaning that unemployment figures reflect only a smaller portion of the jobs lost. This is also reflected in the activity status of young people not in employment, education, or training, abbreviated as NEET (see Box). The share of inactive NEETs not looking for work and/or not available to start work within two weeks) increased twice as much (+0.8 percentage points) as that of unemployed NEETs (+0.4 percentage points) in 2020. However, aggregate Eurostat data also show that NEETs who wanted to work (but did not look actively for work) increased by 0.9 percentage points. This might indicate that new NEETs in 2020 were primarily short-term unemployed.

Just before the onset of the Covid-19 crisis in March 2020, there were approximately 1.7 million fewer young NEETs compared to 2013. However, the number has started to increase once again and in 2020, there were on average around 725.000 more young people in Europe not in employment, education, or training than in 2019. Figure 3 shows that NEET rates increased from 12.5 percent before the onset of the crisis at the end of 2019 to a peak of 14.6 percent in the second quarter of 2020. One year later in the second quarter of 2021, the NEET rate in the European Union had decreased again and stood at 13.2 percent (see Figure 3). 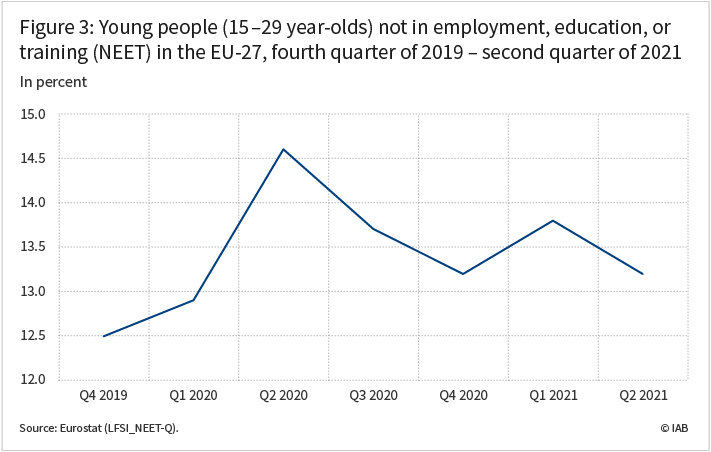 Eurostat reports an above-average increase in NEET rates not only for countries with historically high NEET levels such as Italy or Greece but also for Germany, a country with a generally low NEET rate. The German rate rose from 7.8 percent at the end of 2019 to 9 percent in the second quarter of 2021.

Being NEET has multiple and often intertwined causes. Alongside economic and social disparities between the genders and between regions, individuals’ socio-demographic characteristics (e.g. low educational level), and also institutional causes such as national school-to-work regimes are influencing the risk of a young person becoming NEET.

There are wide variations in the size of the NEET population and their composition among European countries. Despite considerable improvements since 2013, the three country clusters identified by Eurofound in 2016 have largely persisted – also during the pandemic. In the first cluster composed of mostly Nordic, western, and continental countries, the short-term unemployed are the largest NEET group, while in southern Member States of the European Union long-term unemployed and discouraged young jobseekers are prevalent. In eastern European countries, young women caring for children or relatives account for a large proportion of NEETs. In 2020, Italy and Greece saw an above-average increase in NEET rates, while other countries with generally high NEET rates such as Bulgaria or Spain recorded increases below the European average.

School closures and restrictions on work-based learning opportunities caused losses in learning time and students’ acquired competencies. Various surveys such as Eurofound’s survey on the impact of Covid-19 on young people in the European Union show that school closures and containment measures disproportionately affected the mental well-being of young people. Life satisfaction and well-being dropped to its lowest point in spring 2021 when nearly two-thirds of young people were at risk of depression. In contrast, workplace closures had a positive impact on young people’s mental well-being.

Job losses and reduced working hours have led to large reductions in labour income amongst young workers. Indicators such as “at risk of poverty and social exclusion”, however, do not yet provide a clear picture of whether there will be a negative impact on young people’s social situation in the long term. However, there are fears that particularly young people from marginalised backgrounds will suffer the negative consequences of youth unemployment, poor educational outcomes, and poor mental health in the longer run.

Nonetheless, the negative consequences of the Covid-19 crisis for young people’s employment and social situation may be less severe than those of the global financial crisis. Most countries have responded with targeted youth support measures at an early stage to tackle the negative effects of Covid-19 on young people. These measures range from support for keeping and finding a job, to strengthening work-based learning opportunities, to income support and social exclusion prevention. However, only a few Member States have implemented initiatives to improve mental health services for young people. In order to avoid a lost or “lockdown generation” it is therefore important to pay special attention to young people’s mental health in the recovery phase. Also at the European level, a variety of initiatives and programmes have been put in place to address many of the challenges ahead. Funding for young people has become a priority in the budget of the European Union.

Past recessions, particularly the global financial crisis in 2008, have demonstrated that youth unemployment in many European countries not only increases swiftly and significantly at the beginning of economic downturns but remains above pre-crisis levels long after the recovery has begun. Research has found that a large recession at the time of graduation from education and training not only reduces earnings upon graduation but that the effect persists in subsequent years. However, there are reasons to believe that the negative consequences of the Covid-19 crisis on youth employment might be less severe than in the aftermath of the global financial crisis and that the progress achieved in the years before the pandemic has not been entirely undone. In contrast to the financial crisis, national governments and institutions of the European Union have responded with targeted youth support measures at an early stage, which helped to cushion the negative impact on youth unemployment.

Nonetheless, the duration of individual unemployment spells has also increased in Germany – a country with traditionally low youth unemployment rates. The longer the crisis lasts, the higher the risk that unemployment becomes entrenched. A particular worrying phenomenon is the persistence of high NEET rates in countries such as Italy or Greece. In this context, the proper implementation of the reinforced Youth Guarantee – adopted by the European Council in October 2020 – is a chance for many countries to address some important gaps in the Youth Guarantee of 2013, particularly in relation to the quality of traineeships and outreach to vulnerable NEET groups.

Although long-lasting effects on the social situation and mental well-being of young people are still subject to uncertainty, there are concerns that learning losses due to school closures might result in large disadvantages in the longer term.

It is important for labour market policy-makers all over Europe, to pay special attention to young people in the recovery phase. The fundamental challenge is to prevent the damaging effects of the Covid-19 recession from becoming long-term, in order to avoid deep scars in the lives of many young people.

Eurofound (2016): Exploring the diversity of NEETs, Publications Office of the European Union, Luxembourg.

Eurofound (2021): Impact of COVID-19 on young people in the EU. Publications Office of the European Union, Luxembourg, 9 November 2021.

Konle-Seidl, Regina, Picarella, Francesca (2021): Youth in Europe: Effects of COVID-19 on their economic and social situation, Publication for the committee on Employment and Social Affairs, Policy Department for Economic, Scientific and Quality of Life Policies, European Parliament, 24 September 2021.

Konle-Seidl, Regina (2021): Is this crisis different? The impact of the Covid-19 crisis on the economic and social situation of young people in Europe, In: IAB-Forum 22nd of December 2021, https://www.iab-forum.de/en/is-this-crisis-different-the-impact-of-the-covid-19-crisis-on-the-economic-and-social-situation-of-young-people-in-europe/, Retrieved: 24th of May 2022

Regina Konle-Seidl is a senior research fellow at the IAB.

Konle-Seidl, Regina (2021): Is this crisis different? The impact of the Covid-19 crisis on the economic and social situation of young people in Europe, In: IAB-Forum 4. November 2021, https://www.iab-forum.de/en/is-this-crisis-different-the-impact-of-the-covid-19-crisis-on-the-economic-and-social-situation-of-young-people-in-europe/, Abrufdatum: 24.5.2022