Despite economic and institutional differences, youth unemployment figures in Germany and the United Kingdom rose during the Covid-19 pandemic and reached a peak in August 2020. Since then they have tended to decrease in both countries. Three aspects are important in this regard: the total number of unemployed youth, the inflow pattern of young people into unemployment, and the duration of their unemployment spells. The analysis of the two countries’ youth unemployment is embedded in a broader European perspective.

In the aftermath of the Great Recession, the total number of young unemployed in the European Union and most of the member states decreased steadily from 2013 to 2019. This trend reversed in 2020. With the onset of the Covid-19 pandemic, youth unemployment figures rose across Europe, however, with substantial differences between countries.

The development of youth unemployment during the Covid-19 pandemic 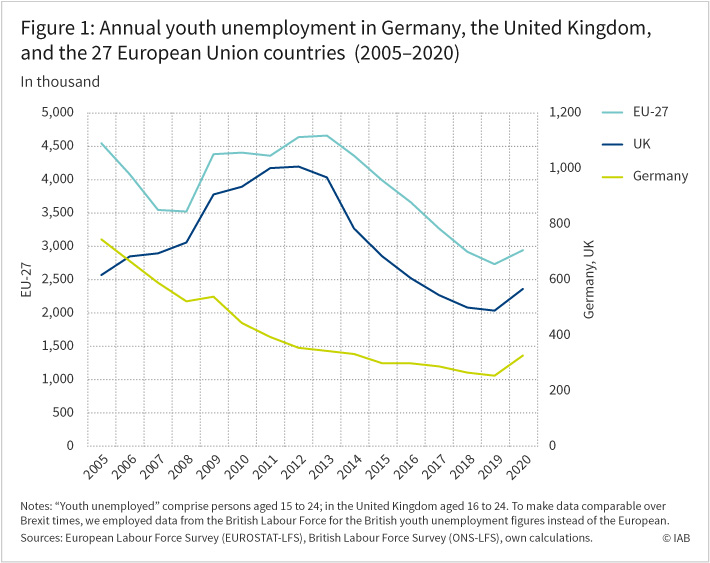 From a monthly perspective, youth unemployment figures started to rise immediately with the introduction of containment measures in March 2020. In both countries, the figures for unemployed youth increased until August 2020, and have decreased since then country-specific (see Figure 2). However, the total numbers of young unemployed differ between Germany and the United Kingdom, with around double the size in the United Kingdom – despite the fact that Germany has the larger youth labour force. According to a 2016 study by Hans Dietrich and Joachim Möller, higher enrolments in education and a smooth transition from apprenticeship training into the labour market in Germany contribute to that difference. 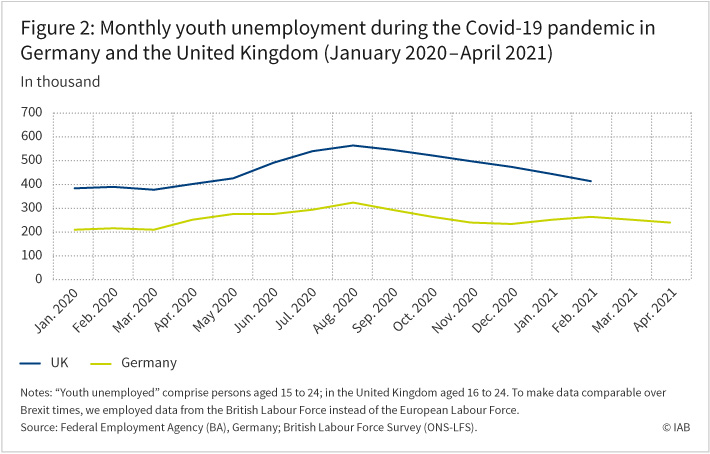 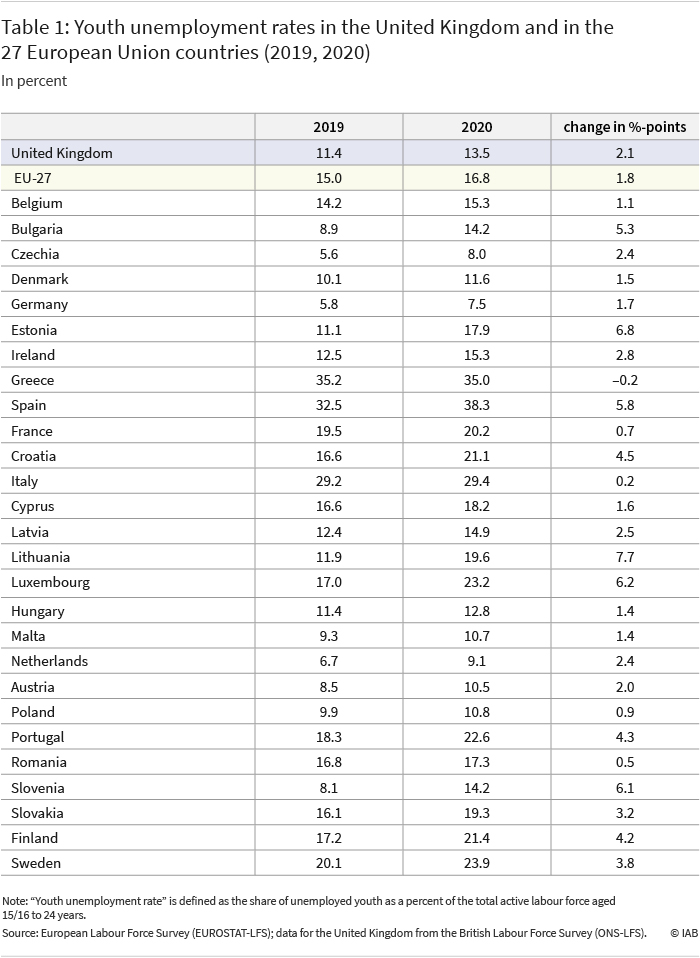 Inflows into youth unemployment in Germany

With employment protection schemes in place, employment based on standard, open-ended contracts changed little during the Covid-19 pandemic in Germany. People having non-standard employment contracts were less fortunate. Their contracts were less often renewed and more frequently terminated than before the crisis, as a 2021 study by Christian Hohendanner showed for fixed term contracts in Germany. This is in line with an accelerated transition of young people from employment into unemployment at the start of the Covid-19 period. As the pandemic progressed, the transition rate from employment into unemployment for young people fell below pre-pandemic figures (see Figure 3). Besides transition from employment, graduates from vocational education and training, and to a smaller extent graduates from universities, who failed to secure continued employment, contributed to an increase in youth unemployment. Since data for the inflow into youth unemployment in the United Kingdom are not available, this analysis focuses on Germany only. 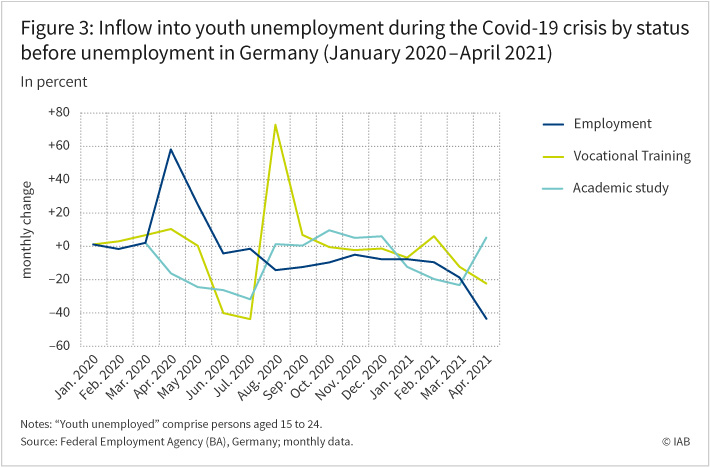 Duration of unemployment among young people is increasing 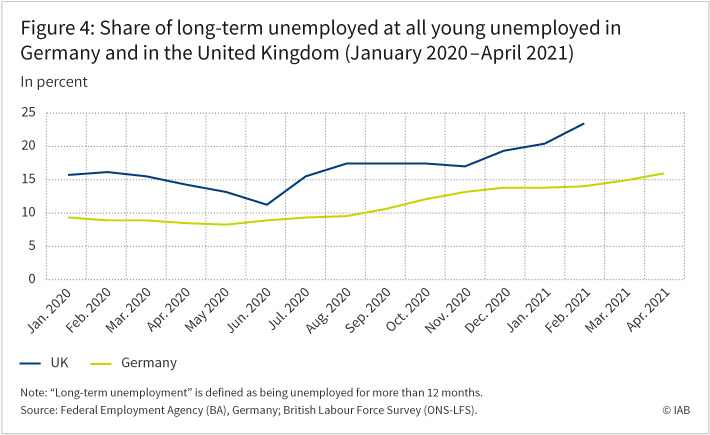 The transition from employment to unemployment contributed to rising youth unemployment especially at the very beginning of the Covid-19 pandemic, whilst later on, the frequency for that type of transitions was lower than in pre-Covid-19 times. Transitions from vocational education and training or university studies into unemployment increased with graduation periods.

The project “Tracking youth joblessness through the Covid-19 crisis” pursues the goal of studying the dynamics of unemployment among young people and the reasons for it in the United Kingdom and in German. It is aimed to work out and evaluate suggestions for political measures. The unemployment of young people between 15 and 24 in the UK and those between 16 and 24 in Germany is examined in the form of quantitative analyses, cohorts, and panel studies. The project will continue until autumn 2022 and, among other things, will study the effects of the Covid-19 crisis on the mental burdens for young people, their life satisfaction, and on their specific vocational training situation. It is a cooperation project between the Institute for Employment Research (Institut für Arbeitsmarkt- und Berufsforschung) and the University College London, financed by the Economic and Social Research Council.

Dr Golo Henseke is a research associate at the Institute of Education, University College London.

Juliane Achatz is a senior researcher in the department "Joblessness and social inclusion" at the IAB.

Professor Dr Silke Anger is head of the research department “Education, Training, and Employment Over the Life Course” at the IAB.

Dr Bernhard Christoph is a senior researcher in the department "Education, Training, and Employment Over the Life Course" at the IAB.

Alexander Patzina is a senior researcher in the research department "Education, Training, and Employment Over the Life Course".