What do we know about the employment of refugees in Germany? Answers to some frequently asked questions.

In 2015, the highest number of refugees arrived in Germany since the end of the Second World War. The overall number of refugees in Germany increased by 1.2 million people until the end of 2018. A recent analysis implies faster labour market integration of refugees who arrived in Germany between 2013 to 2016 than was the case for refugees from previous years. The results show that the employment rate increases with the duration of stay. These figures are an important indicator for the integration of refugees into the labour market and have therefore been widely discussed in Germany. In this interview, the authors Herbert Brücker and Yuliya Kosyakova answer key questions about the study, which was co-authored with Eric Schuß.

The analysis is based on a representative sample of the refugees and asylum-seekers who arrived in Germany between 1 January 2013 and 31 December 2016. Are the survey results representative?

Yes. The sample of the IAB-BAMF-SOEP survey of refugees was drawn from the Central Register of Foreigners (Ausländerzentralregister), in which all foreigners from third countries are recorded (more information on this data set can be found on the FDZ website). The Central Register of Foreigners contains information about the residence status and the date of immigration. A sample of all adult refugees who arrived in Germany from 1 January 2013 to 31 December 2016 was drawn from this population. Other household members were also interviewed, so that the data additionally includes refugees who arrived in Germany for family reunification reasons before or after these dates. The results on refugees’ employment progress published in the IAB Kurzbericht 4/2020 are based on the third wave of the survey with 4,265 observations. The sample is therefore large enough to be able to make representative statements.

How should one interpret the figure that almost half of the refugees are employed five years after arrival? 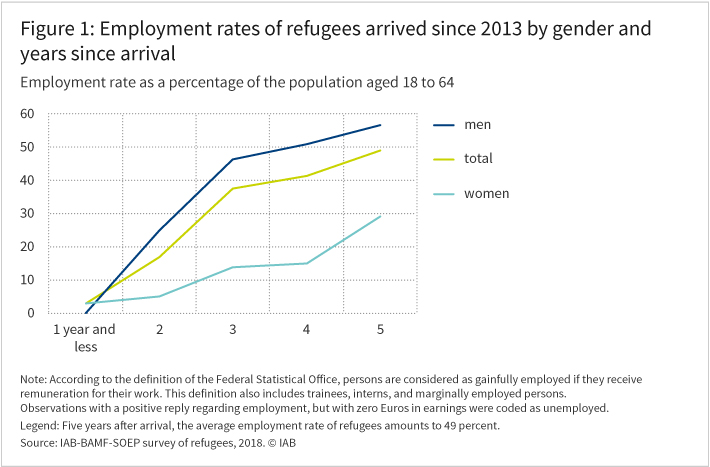 Do the refugees mainly work in unskilled or low-skilled jobs?

“Significantly more refugees perform semi- and unskilled activities than those born in Germany.”

Do the refugees who work earn so little that they are largely dependent on social transfer payments?

“The vast majority of refugees are not dependent on additional transfer benefits.”

Do the refugees take part in training?

By their arrival in Germany, 62 percent of refugees attained at least 9 years of general and vocational education (population born in Germany: 97%) and 40 percent attained at least 12 years of general and vocational education (population born in Germany: 49%). Against this background, successful integration into German labour market and the portability of human capital acquired in the origin and transit countries is also likely to depend heavily on the acquisition of further educational qualifications. Overall, 77 percent of refugees in Germany aspired to attend an educational institution in 2018 (men: 80%, women: 67%). While participation in education and training was comparably low in the first years since arrival, we observe a gradual increase in educational activities since then. By the second half of 2018, 23 percent of adult refugees had attended a general education school, vocational educational institution, college or university or participated in a vocational training measure; 15 percent have been attending a vocational or general educational institution at the time of the survey. Compared to the previous year, the share of refugees in education increased by 5 percentage points. More detailed analysis implied that among refugees who were in education in the second half of 2018, the majority had started vocational training (9%), 4 percent attended schools or participated in further education, and 2 percent attended a university or college.

The fact that at the time of the survey only just over a quarter of the refugees had attended an educational institution in Germany can be driven by various reasons: amongst others, insufficient language skills and general educational requirements, obstacles to admission, financial pressure to enter employment as quick as possible, and many more. Still, the share of refugees in education and training increases with the duration of stay in Germany.

Brücker, Herbert; Kosyakova, YuliyaMartin Schludi (2020): What do we know about the employment of refugees in Germany? Answers to some frequently asked questions., In: IAB-Forum 18th of June 2020, https://www.iab-forum.de/en/what-do-we-know-about-the-employment-of-refugees-in-germany-answers-to-some-frequently-asked-questions/, Retrieved: 6th of July 2022

Dr Yuliya Kosyakova is senior researcher in the research department "Migration and International Labour Studies" at the IAB.

Brücker, Herbert ; Kosyakova, Yuliya ; (2020): What do we know about the employment of refugees in Germany? Answers to some frequently asked questions., In: IAB-Forum 15. May 2020, https://www.iab-forum.de/en/what-do-we-know-about-the-employment-of-refugees-in-germany-answers-to-some-frequently-asked-questions/, Abrufdatum: 6.7.2022