Bogus self-employment in Germany. Also a question of definition

The occurrence of bogus self-employment generally indicates a grey area, where the distinction between dependent employment and self-employment requires complex considerations and inspections. Especially new forms of work organisation challenge that distinction to a raising degree. Example to that development could be found in the case of digital economy (platform-based work) or small jobs assigned to freelancers in the gig economy or chauffeur services in case of Uber or mytaxi.

In a joint study with the Federal Ministry for Labour and Social Affairs (Bundesministerium für Arbeit und Soziales), the IAB empirically investigated the prevalence of bogus self-employment and the social situation of those involved. This article provides empirical results deriving from that study addressing the following questions: How many workers could be classified as bogus self-employed? Which sectors and occupations are affected mostly? Which sociodemographic groups show higher risks of incidence? And what are the consequences for those affected by bogus self-employment?

Bogus self-employment is a contractual relationship in which people are commissioned as self-employed persons according to the contract, while, objectively, the characteristics of a dependent employee are fulfilled. As a result, the people identified as bogus self-employed would not benefit from employment protection designed for employees in their real working situation even if these people are eligible for that protection by labour law.

In detail formally self-employed persons are considered as dependent employees by the German Federal Labour Court if they follow the instructions of their client or principal regarding the type, the timing, and the place of delivery service of craftsmanship, and these workers are obliged to cooperate with employees of the client and to use his/her work equipment.

The study is focused on the prevailing definitions of self-employment and dependent employment, which are mainly based on the jurisdiction of the Federal Labour Court (Bundesarbeitsgericht BAG). In addition to the jurisdiction of the Federal Labour Court, the jurisdiction of the State Labour Courts is considered and condensated to the so-called “BAG-model”. The “BAG-model” emphasizes the guiding principle of “personal dependence”, which, in turn, is connected with the criteria of “being subject to directives” and “integration into the organization”. One can be subject to directives in terms of location, time and expertise. If self-employed persons depend on the personnel and work equipment of the client in a particular way, a formal integration into the organization of the client can be assumed.

In addition to the so-called “BAG model” the survey applies a so-called “alternative model” that was developed by the labour law expert Prof. Rolf Wank. The alternative model is also based on the BAG model criteria, but applies an alternative interpretation from a theoretical understanding of legal based law. The core idea of the “alternative model” is entrepreneurial activity on a market requiring a reasonable balance of opportunities and risks. That balance is not given when self-employed have no freedom in terms of entrepreneurial content, do not have an own organization, and are not able to appear on the market as independent actors.

A detailed description of the legal based models and empirical findings on bogus self-employment in Germany from various authors is published in Volume 364 of the IAB-Bibliothek series. In addition, the empirical findings are summarized in our IAB-Kurzbericht 1/2017. This article is focused on some highlighted aspects.

On the basis of the “BAG model”, the IAB survey estimates the number of bogus self-employed persons in the main occupation to be around 235,000 in Germany. This equals approximately 0.7 per cent of the working population (without civil servants and farmers). Regarding the “alternative model” 436,000 workers are affected, i.e., approximately 1.3 per cent. As compared to the first IAB survey on bogus self-employment conducted by Hans Dietrich in 1998, which is based on data from 1995 the new survey finds no evidence that the number of bogus self-employed persons has increased significantly in absolute terms. In relative terms – i.e., as share of all self-employed or gainfully employed persons –, the importance has even slightly decreased. 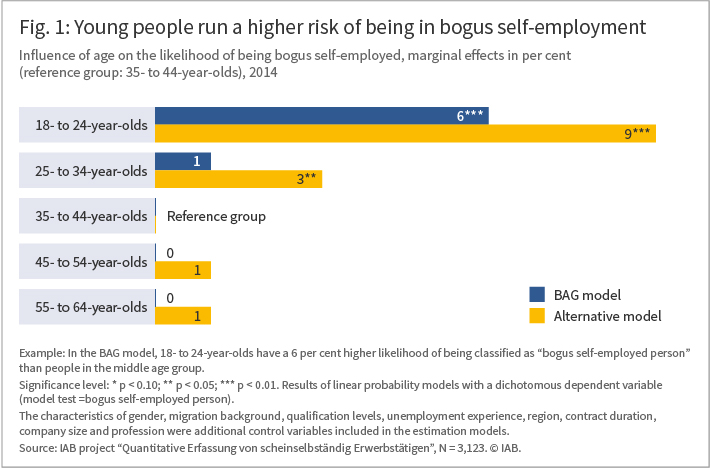 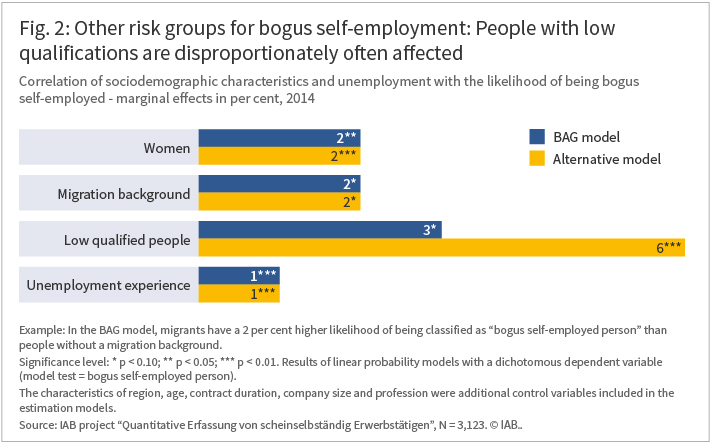 Consequences of bogus self-employment on the income

Another objective of the study was to examine the consequences of bogus self-employment regarding employment outcome. For that purpose, the gross monthly income of bogus self-employed persons is related to the gross monthly income of self-employed and dependent employed. Only the main occupation of respondents is considered here. On average the results indicate, the latter two groups earned about 20 per cent more than bogus self-employed. This findings also hold true under control of gender, qualifications, professional experience, migration background, children in the household, health status, company size, region and profession (see Figure 3). 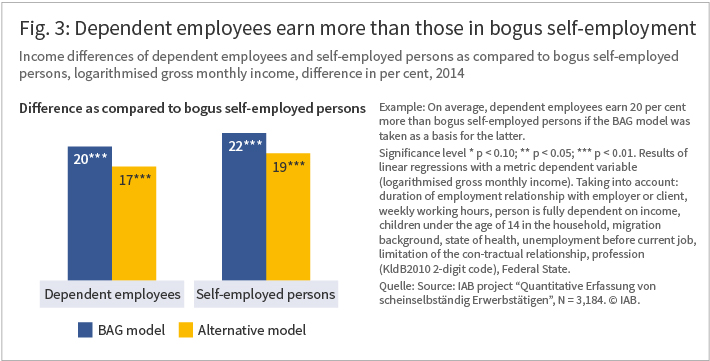 It figures out that individuals with less favourable labour market conditions (for example, a low level of education, little work experience, long periods of unemployment) show both a worse earning potential and a higher risk of becoming bogus self-employed. These results hold for both definitions of bogus self-employed applied by this study.

Behling, Felix and Mark Harvey (2015): The evolution of false self-employment in the British construction industry: a neo- Polanyian account of labour market formation. In: Work, employment and society, 29(6), 969-988.

Alexander Patzina is a senior researcher in the research department "Education, Training, and Employment Over the Life Course".