The foundation of the German work relations system is the legal stipulations governing free collective bargaining and workforce representation by works councils (for the distribution of works councils, see Peter Ellguth’s contribution “Codetermination losing ground” in this magazine.) Sectoral inter-company agreements or industry-wide multi-employer agreements play an important role in governing working conditions and the wage-setting process. They are usually negotiated for regions and industries, ensuring consistent competitive conditions in labour costs.

This gives companies a sound basis for planning. Moreover, they guarantee industrial peace during the term of the agreements. The complex task of negotiating wages and working conditions is mainly delegated to the bargaining parties, which relieves the companies.

However, (multi-employer) wage agreements at industry level are not the only way to govern wages and working conditions: it is also possible to conclude agreements at the company or establishment level (company collective agreements) or individual employment contracts. The latter are mainly used in smaller companies. Company collective agreements are an interesting alternative for larger companies, because the administrative overhead will quickly get out of hand if individual employment contracts must be negotiated with every single employee.

Companies which are not formally bound by collective agreements but are voluntarily oriented towards a sectoral collective agreement nevertheless are not so much in the centre of attention. But if we are trying to estimate how important industry-wide multi-employer wage agreements actually are to the economy, those companies must be considered as well.

Since 1996, the IAB Establishment Panel has collected information on binding collective agreements for both East and West Germany every year (see the “IAB Establishment Panel” info box). The current results are based on information provided by approx. 15,500 companies in both parts of the country. Due to the structure of the random sample, the results are representative for the approx. 2.1 million companies with at least one employee subject to social security contributions. A total of roughly 40 million people are currently employed by these companies.

From the beginning of the studies in 1996 until the mid-2000s, there was a strong downward trend in sectoral binding collective agreements in all of Germany. After that, coverage remained more or less stable until 2010 in West Germany; in East Germany, there was no stabilisation until after 2010. Currently, both parts of the country are seeing another slight downward trend. It remains to be seen in the next few years whether that trend continues.

In the overall economy, the share of employees in companies bound by sectoral collective agreements went down by 21 percentage points in West Germany and by 22 percentage points in East Germany between 1996 and 2017 (see Figure 1). This development is largely due to the decrease in sectoral binding collective agreements in the private industry; binding industry-wide multi-employer wage agreements in the public sector largely remained stable during the period under observation. 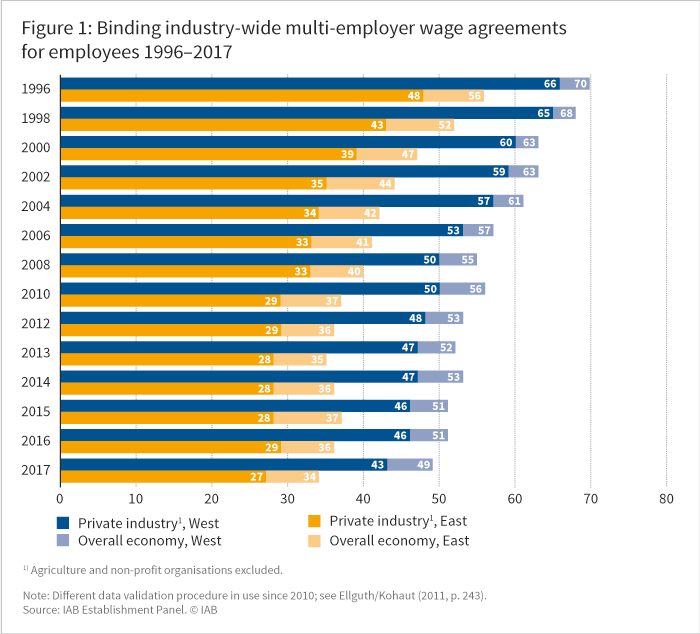 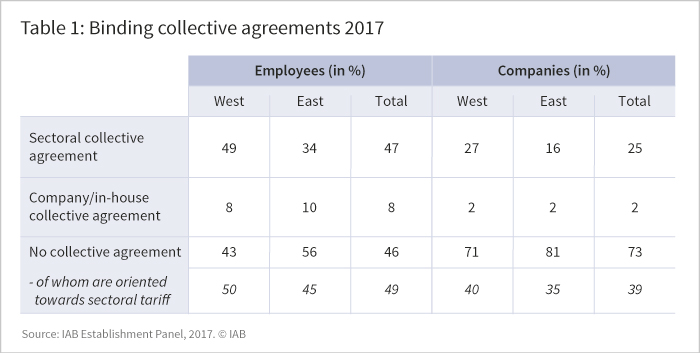 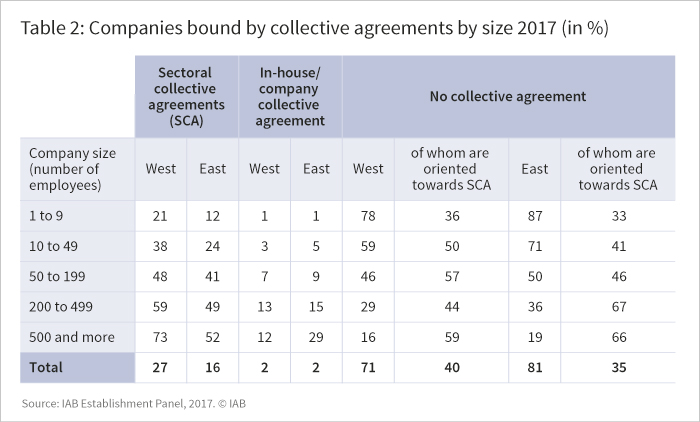 Binding collective agreements have been on a decline for years in both East and West Germany. This process of erosion may be slow and gradual, but the trend as such is still clear and ongoing. Although many companies continue to use sectoral collective agreements as a frame of reference in negotiating wages and working conditions, there is no legal obligation to do so in such companies, which leads to a lack of security for the employees.

An article on the distribution of works councils  by Peter Ellguth also based on IAB Establishment Panel data will be published  in this magazine on June 14th, 2018 .

Since 1994 Dr. Susanne Kohaut has been working as a senior researcher at the IAB.

Covid-19 crisis, Ukraine war and fear of stagflation: Why we need a new supply policy

Inflation is currently at a record high and will continue to go up as a result of the war in Ukraine and sanctions imposed on Russia. Considering the shortages in the economic environment, there is a ...read more