More and more companies and administrations offer their employees working time accounts. Between 1999 and 2016, the proportion of companies using this instrument has almost doubled. Above all, models that enable a short-term adjustment of work-input are particularly widespread. By contrast, long-term accounts, which facilitate longer leave periods including family leave, remain the exception.

Both employers and employees can benefit from working time accounts, depending on their configuration. Working time accounts offer employers a tool for adapting the work-input according to demand without hiring or dismissing staff. This saves companies recruitment and training costs as well as costs associated with dismissal.

In international comparison Germany is considered as an economy which relies more on internal than on external flexibility when dealing with fluctuations in demand. This feature of the German labour market is mainly attributed to the institutional setting with strong job security regulations but also to the special and sustainable way German firms train and keep their skilled workforce.

In addition to the job-stability generated by working time accounts, employees can profit from them where they facilitate a better reconciliation between work and family life. This applies in particular to so-called short-term accounts. These are accounts in which the balances (i.e. working-time surpluses or deficits) have to be settled within a period of up to one year, or where they may not exceed a certain value by a certain date. This period is referred to as „compensation period“.

In addition, there are so-called separate long-term accounts (“Zeitwertkonten”). From the point of view of employees, these have the purpose of accruing time for longer periods of leave (sabbaticals) or enabling early retirement. Firms may offer such accounts in order to be more attractive to applicants.

Restrictions on the use of working time accounts

Working time accounts were used particularly intensively in the Great Recession of 2008/2009 in order to reduce the working hours of employees temporarily as shown in a 2010 study by Joachim Möller. A 2014 analysis by Alexander Herzog-Stein and Ines Zapf explains that in this instance the use of this instrument helped delay or even avoid negative employment adjustments in times of crisis. The findings on the longer-term employment effects of working time accounts in the Great Recession are not uniform as a selection of studies show: Michael C. Burda and Jennifer Hunt (2011), Olga Bohachova, Bernhard Boockmann and Claudia Buch (2011), Enzo Weber (2015), Almut Balleer, Britta Gehrke and Christian Merkl (2017). However, there is no doubt that at least in the short term they helped to stabilize the employment level or provided companies with a breather as shown by the 2014 study by Alexander Herzog-Stein and Ines Zapf.

In the following sections, we use the data from the IAB Establishment Panel firstly to examine how the spread of working time accounts developed. We show differences according to company size and sectors. After a differentiated consideration of the compensation periods, we look for explanations as to why companies rarely use long-term accounts.

Working time accounts are significantly more widespread in larger companies than in smaller ones. Amongst the companies with 250 or more employees, the share was about 81 percent in 2016, whereas in small businesses with up to nine employees only around one in four companies had working time accounts. The overall increase in enterprises with working-time accounts since 1999 has been largely parallel in all the individual size categories (see Figure 1). 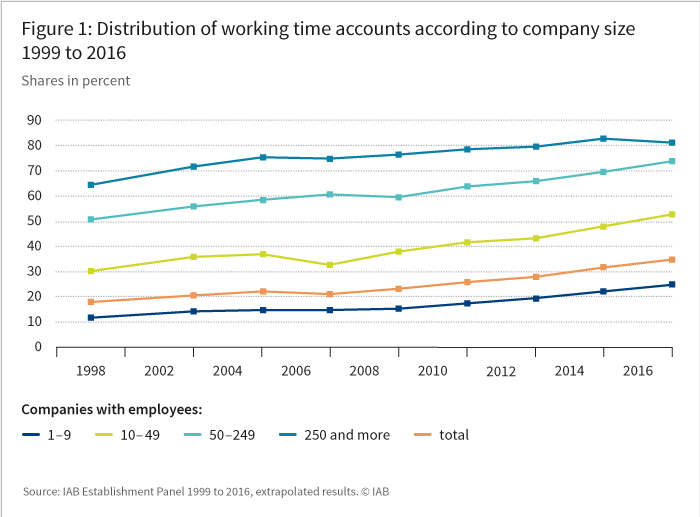 In four out of ten companies – and thus most companies with working time accounts – the compensation period is between half a year and one year (see Table 1). In every fifth firm there is a shorter time frame of up to half a year. Flexitime models with this relatively short compensation period provide a low flexibility potential, not only with regard to time credits and debts. Thus, an efficient adaptation of the labour force is limited. Seasonal as well as cyclical fluctuations can hardly be cushioned by such a short compensation period, which explains its lesser importance. 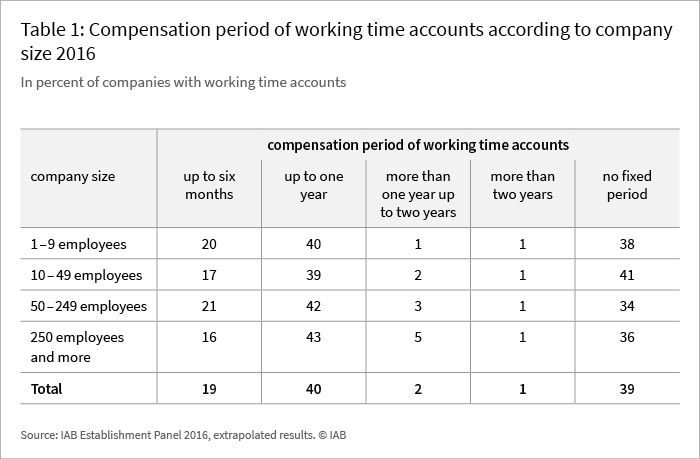 Long-term accounts are designed to facilitate a life-time-oriented workforce design. Thus, accumulated (time) credit can be used, for example, for further training activities, for extended leave for family or other duties and interests, or early retirement.

With the introduction of the Law on Improving Flexible Working Hours (Flexi II Act) in 2009, the use of long-term accounts has been placed on a new legal footing. With this legal safeguard, the legislator wanted to give a strong boost to the distribution of long-term accounts of which until then little use was made.

Nevertheless, in 2016 just two percent of companies in Germany offer their employees separate long-term accounts and this value has changed little in the last 15 years.

In terms of the purpose of long-term accounts, a distinction can be made between optional and age-related accounts. In the optional variant, the accumulated time credits are drawn on whilst the employee is still of working age. They can be used for longer-term leave (sabbaticals) as well as for further education, or family time with full pay. In the case of age-related long-term accounts, the intention is to withdraw the credits at the end of the individual’s working life. This makes early retirement or partial retirement possible without state funding.

Between 2002 and 2016, the intended use of long-term accounts has shifted (see Figure 2). In most businesses, the majority of accumulated time credits are intended to be used for sabbaticals. Second, they can be used for family-leave, the category with the strongest increase. In just over one in three companies with long-term accounts the credits can be used for further training periods, this trend also is rising. Interestingly, since 2002 the share of enterprises that offer early retirement as a means to balance the accumulated credit has decreased. Overall, businesses are increasingly offering their employees more choice as to how they use their time credits. 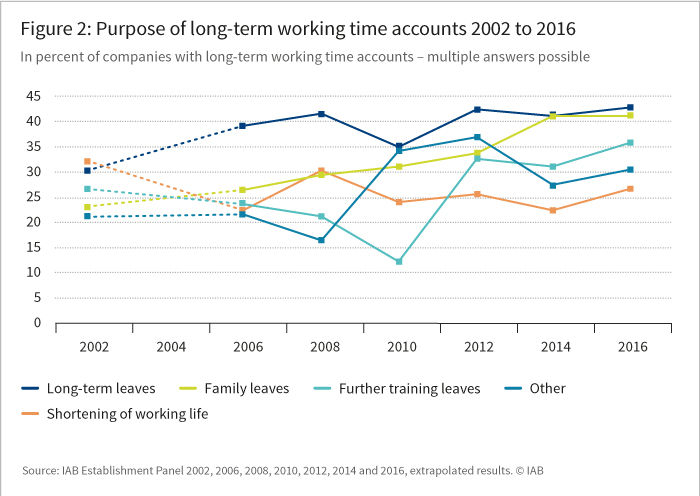 Our analyses show that working time accounts are still on the rise. They allow companies to adjust the labour input to short-term fluctuations in demand. Employees, on the other hand, can use the flexibility they offer in terms of working time to improve their work-life balance.

By contrast, the development of long-term accounts is stagnating at a consistently low level. The introduction of the Flexi II Act 2009 was intended to facilitate the use of working time flexibility over the course of a career. Overall, however, the hoped-for increase in respective company agreements did not occur, as can be seen in the data of the IAB Establishment Panel. The legal regulations are perceived as too complicated and are obviously not sufficiently attractive for employers who are the ones who ultimately decide on the introduction of such accounts.

From a worker’s point of view, long-term accounts could contribute to a flexible working life. However, any credit that is to be taken in the future must first be saved. A fundamental problem with this is that the benefits are realised in the long-term, while the costs are incurred directly in the form of decreased leisure time or unavailable income components. As a result, these options are usable for various groups of employees to varying degrees – depending on their occupational status, gender and family context. The time and financial capacity (or constraints) of large parts of the workforce are likely to make it difficult for many to put by a large amount of credit for the long term. In addition, some issues persist which have not been completely solved, such as when the employer changes.

All in all, working time accounts are an important flexibility tool for both employees and employers. In times of increasing volatility and transformations in the world of work, the importance of flexible working hours is likely to increase further.

Since 1996 Peter Ellguth has been working as a senior researcher at the IAB.

Dr Ines Zapf is a researcher in the department "Forecasts and Macroeconomic Analyses" at the IAB.