20. April 2022 | Series "The Effects of the Ukraine War on the German Labour Market"

Russia’s exports account for a large share of world trade in a few goods and commodities classes. These are most notably nickel, fertilisers, mineral fuels and mineral oils, cereals and wood. Their prices and supply are affected by the war in Ukraine and the underlying economic sanctions. The price changes of those goods and commodities, but also of goods down the production chain, will affect the German economy through trade also with third countries.

A sweeping number of sanctions against Russia have been introduced, both leading up to and following Russia’s invasion of Ukraine on 24 February 2022. On 22 February, Germany stopped the certification of the gas pipeline Nord Stream 2; on 08 March, the United States prohibited the import of Russian oil, liquefied natural gas, and coal. On the same date, Russia banned the export of some raw materials and commodities. On 11 March, the European Union, the United States, the United Kingdom, Canada, France, Germany, Italy, and Japan announced a number of additional financial and trade sanctions, including the introduction of higher tariffs. The World Trade Organization’s (WTO) most favoured nation principle roughly means that if a member country improves trade conditions with a single partner, then it shall be obligated to give the same conditions to all other WTO members as described on the WTO website. With the introduction of the tariffs, Russia’s benefits of being a member of the WTO were in effect eliminated. Russia retaliated and prohibited the export of a number of products, including telecom, medical, auto, agricultural, electrical equipment and some forestry products, until the end of 2022. On 15 March, the European Union introduced more sanctions, part of which was a restriction on the import of iron and steel from Russia. The list of measures is long, with a comprehensive version made available by the Peterson Institute for International Economics.

In 2020, China was Russia’s biggest export market, followed by the Netherlands, the United Kingdom and in fourth place Germany. Russia imported the most goods from China, followed by Germany and the United States. From the point of view of Russia, Germany and the entire European Union are important trading partners. Although Germany imports large quantities of natural gas and crude oil from Russia, trade with Russia accounts for only a small share of total German exports and imports.

Looking at world trade, Russia accounts for a significant share of the exports of a number of specific goods and commodities. These are the products and markets where sanctions and Russia’s overall standing in the world economy will have the biggest effect on world prices. The United Nations Statistics Division groups commodities and products into 98 categories based on their economic usage or components. Figure 1 depicts twelve product categories within which Russia’s exports formed the largest share of world exports in 2020. International trade was significantly disrupted in 2020 due to the Covid-19 pandemic. This is why the export shares in Figure 1 are also shown for 2019, a year without major disruptions, at least none comparable to the ones caused by the pandemic.

In 2020, nickel and articles made of nickel ranked top: with almost 13 percent of all countries’ exports, Russia was the largest exporter (see Figure 1) and the third-largest producer in the world. Nickel is an important material used for the production of batteries. Disruptions in its supply are likely to affect the value chain for batteries and therefore also for electric vehicles. As expected, the price of nickel has increased considerably since the beginning of the war in Ukraine. On the London Metal Exchange, a ton of the raw material was traded for an average of roughly 22 000 US dollars in January this year, while the average price for March was at about 37 000 US dollars.

Fertilisers are another group of products which Russia exported on a large scale both in 2019 (14 % of world exports) and in 2020 (13 %). Fertilisers affect the production costs of farmers, as described in an article by Gregoire Lory in Euronews on 21 March 2022. This will likely lead to an increase in prices of a broad range of agricultural products, not only the ones produced in Germany but also those coming from abroad.

The third category are mineral fuels and mineral oils, the products of which category Germany imports in large quantities directly from Russia. Russia was the third-largest exporter in the world after the United States and the United Arab Emirates in 2020. It is therefore not a surprise that oil and natural gas prices spiked after the beginning of the war in Ukraine. Oil markets have a global nature, whereas natural gas supply depends on pipeline networks between countries and terminals for liquefied gas. The natural gas markets are more regional according to an article by Cullen S. Hendrix from 03 March 2022, which explains some of the price differences between the United States and the European Union. 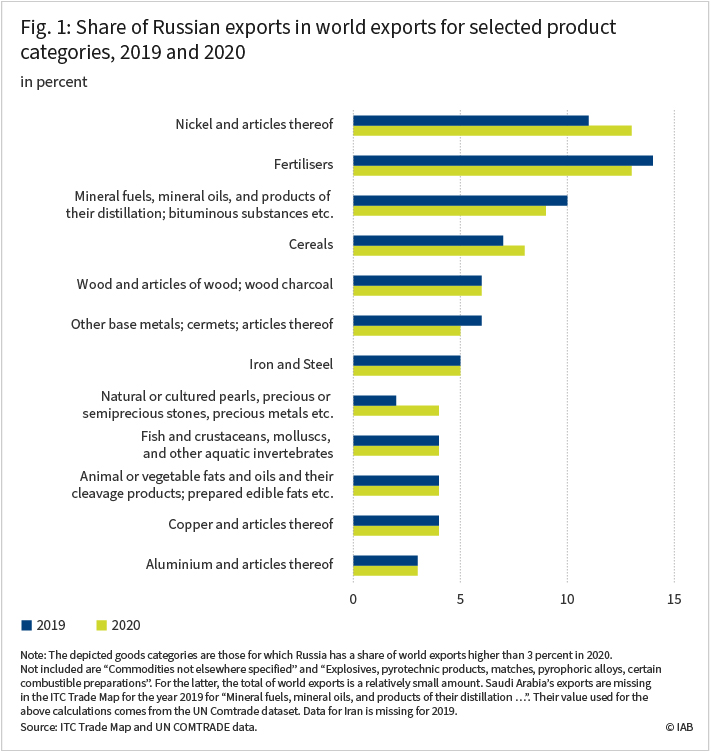 It is an essential question whether and for how long oil and natural gas prices will remain at higher levels. Natural gas prices can be persistent, given the more regionalized markets. Massimo Guidolin and Eliana La Ferrara find in a study from 2010, on the other hand, that violent conflicts involving oil-producing countries lead mostly to temporary price changes for oil lasting only several weeks.

While oil and gas production can be increased in order to stabilize the market and bring prices down, this is not the case for wheat, barley, and the other agricultural products within the group of cereals. Planting is a seasonal matter and cannot be adjusted at short notice (Cullen S. Hendrix discusses the impact of the war on food prices in another article from 02 March 2022). Russia was the leading exporter of wheat and meslin in 2020 and ranked third for barley, which are sub-categories within the group of cereals. For the entire class of agricultural products defined as cereals, Russia exported 8 percent of the world total in 2020.

On 06 March, Ukraine introduced a licensing system for the export of wheat, corn, and sunflower oil and prohibited the export of rye, oats millet, and buckwheat, among other agricultural products. The country’s exports of cereals account for almost 8 percent of the world total (see Figure 2), which, when combined with Russia’s share, adds up to 16 percent. The most affected sub-categories are wheat and meslin, for which the joint share of Russia’s and Ukraine’s exports is about 26 percent, and for barley about 24 percent. The joint share of exports of Russia and Ukraine in the world total for animal and vegetable fats, another of the 98 main categories, amounts to over 9 percent.

Many of the goods for which Russia is a major exporter are inputs to other products and raw materials, likely affecting prices down the production chain. As for direct exposure to the mentioned twelve product categories, with the exception of mineral fuels and oils, German trade with the world is not large. Figure 3 depicts the total value of German trade with the entire world for the same commodities and product classes as in Figure 1.

The macroeconomic costs of the war and sanctions for the German producers and consumers will most likely come through broad price effects, not only directly through the imported goods depicted in Figure 3 but also through goods (and services) down the production chain. 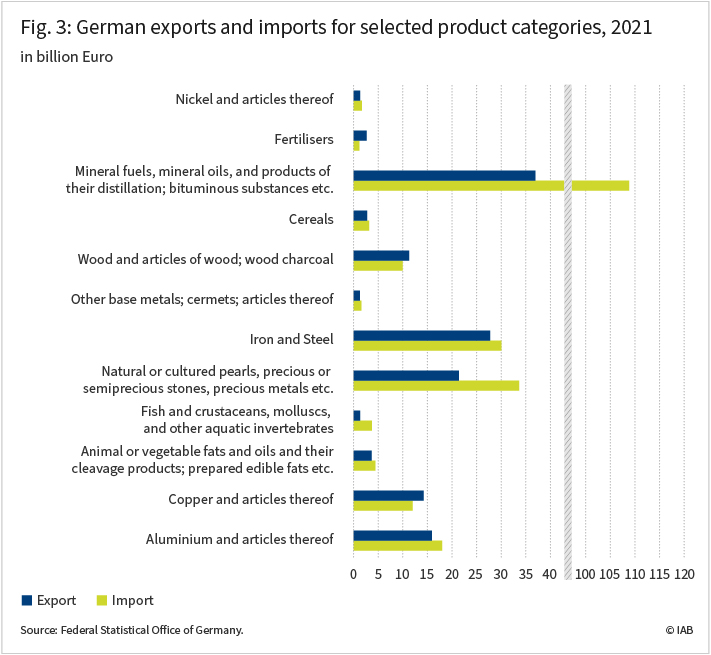 Temporary effects of missing or delayed supplies of more specific goods and materials imported not only from Russia but also from Ukraine already have an effect on German producers. One example is the announcement in February 2022 of short-time work by car manufacturers due to missing cable harnesses from Ukraine, as described in an MDR Sachsen article from 26 February 2022. The ability of such interruptions to disturb specific industries will depend on those industries’ ability to quickly diversify suppliers.

Russia plays an important role in world trade for a number of goods and commodities, which are often part of many other products’ value chains. While Russia is not a major trading partner of Germany, with the exception of natural gas and oil, sanctions and trade disruption will influence the German economy through price effects for products imported also from third countries. The magnitude of the adverse effects will depend on how quickly German establishments are able to diversify their supplies, and on their ability to negotiate prices.

It is important to note that Figures 1 and 2 depict numbers for 2019 and 2020. There are no available export figures for Russia for 2021 yet. On the other hand, Figure 3 is intentionally focused on 2021, since the year provides the most recent data on German exports and imports.

Hendrix, Cullen S. (2022): Russia and Ukraine are key exporters of food and energy. Will global prices spike? Here’s what the research tells us, The Washington Post, accessed on 24.03.2022.

Kamal Kassam is a Research Assistant at the researdch departement "Migration and International Labour Studies" at the Institute for Employment Research (IAB) and is participant in the joint graduate program of the IAB and the University of Erlangen-Nuremberg (GradAB).