For every euro a man earned per hour in Germany in 2018, a woman earned on average only 0.79 euros. This amounts to a gender wage gap of 21 percent, which is even greater among high-skilled individuals. In order to develop policies to reduce the gender wage gap, one should understand the sources behind this phenomenon. This particularly pertains to the early stages of the career when graduates make long-lasting occupation-related decisions.

Higher prevalence of career breaks and part-time employment among female employees, as well as gender differences in education, occupation and managerial positions are the main sources of the gender wage gap, according to a study by Francine D. Blau and Lawrence M. Kahn conducted in 2017. In this context, one might expect the gender wage gap to be close to zero when the focus is on the first full-time job of university graduates, since family-related decisions and career-specific developments,  such as promotions, are negligible at the beginning of a career. However, the presence of discrimination, differences in personality traits, negotiation behavior and other unobserved characteristics between men and women can still lead to a gender wage gap at an early stage of the career. This analysis investigates whether a gender wage gap emerges among similarly educated, high-skilled individuals directly after graduation.

To investigate this matter, we use the data of graduates from the University of Regensburg combined with the IAB data. These data provide detailed education-related information on graduates, as well as their daily wages, occupation and establishment characteristics. 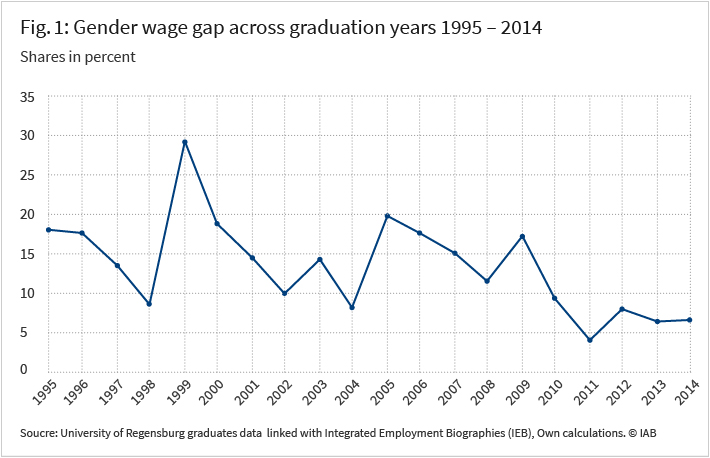 Sources of the gender wage gap 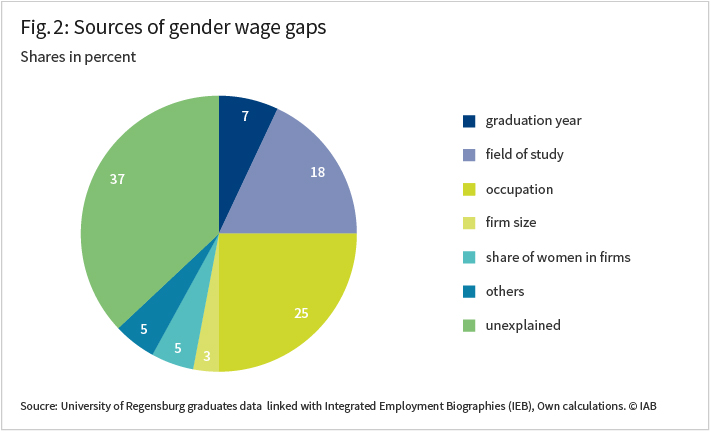 Other factors that contribute to the gender wage gap to a smaller degree include the graduation year, the share of women in a company, and the total number of employees in a company. These characteristics can be of importance because women prefer smaller companies or those with a higher share of women; these employers, however, are likely to pay lower wages. Yet, a part of the gap remains which cannot be explained by differences in observable characteristics between men and women. This unexplained gap amounts to around 5 percent, and represents 37 percent of the overall gender wage gap. This indicates that female master graduates who graduate in the same field of study, work in the same occupation, and have equal qualifications still earn 5 percent less as compared to their male counterparts. This can be explained either by discrimination on the labour market, since it implies differences in returns to observable characteristics (e.g. women’s qualifications are valued less than men’s), or by differences in unmeasured characteristics (e.g. negotiation skills).

As shown in Figure 2, differences in the field of study explain 18 percent of the overall gender wage gap. The data reveal that female and male students enroll in different fields of study, and wages are different across these fields. In other words, male students opt for better-paid fields as compared to female students. Figure 3 depicts the gender composition, mean monthly wage and mean log wage gap among master graduates by selected fields of study in their first job after graduation. 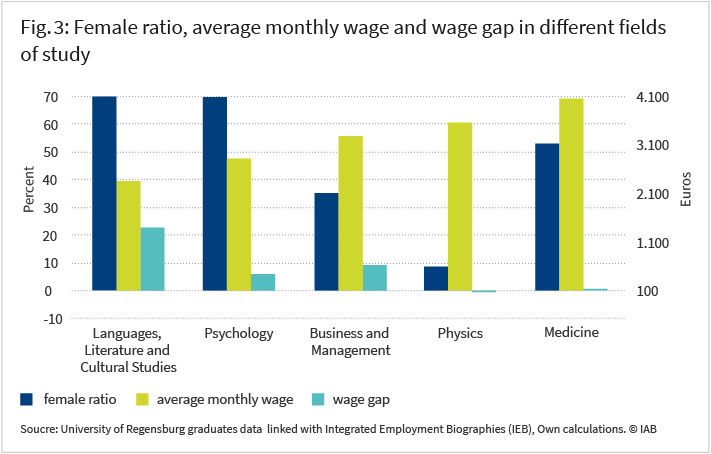 There is significant heterogeneity between the fields of study. The language, literature and cultural study fields not only have the highest gender wage gap with 23 percent, they also have the highest female share with 70 percent and the lowest mean monthly wage compared to other fields. In psychology, where the share of females is also substantial, there is a lower gender wage gap of 6 percent. Graduates in business and management fields earn higher wages than psychology graduates, and the gender wage gap is slightly higher in this field. In natural sciences, such as physics, graduates earn higher wages than in most other fields, and women earn even slightly more than men do. However, only 9 percent of all graduates in physics are women.

Finally, in the field of medicine, male and female graduates earn similar wages and the gender composition is almost equal with around 47 percent of male graduates. The gender wage gap within this field is near zero.

There are no gender differences in occupation among graduates in medicine. As expected, most of the medicine graduates (93 percent) work as medical doctors and the share of men and women in this area is equal.

The analysis shows that a gender wage gap emerges already in the first job after graduation among graduates from a German university. Even though this gap has decreased over the last years, it is still persistent. Occupational differences account for a significant share in the gender wage gap, followed by differences in the fields of study. While females choose lower-paid fields of study (language and cultural studies, psychology), males segregate into higher-paid fields (economics, business and physics). The wage gap is higher in the lower-paid fields. This can be explained by females – in particular language and cultural studies graduates – working in occupations which are not related to their field of study. In physics, the gender gap is low and wages are high. However, this field does not attract many women. Only in the medical field the share of males and females is balanced, salaries are high, and no wage gap exists.

Differences in the choice of the field of study and occupation are the main drivers of the gender wage gap at the beginning of a career. Therefore, it is not only important to motivate women to choose more technical subjects, but also to motivate men to choose the areas dominated by women in order to achieve more gender equality. However, an equal gender composition in the fields of study is not enough, as women may still choose other occupations than men. Differences in choices can be explained by gender differences in preferences, such as taste for competition and negotiation in a job, non-wage opportunities such as family-friendly jobs/flexible hours, or labour market discrimination. Graduates in medicine have fewer choices, since becoming a doctor is the norm for both genders. This leads to similar wages after graduation for both male and female graduates in this field. Policy makers should focus on the causes of gender differences in the choice of the field of study and occupation to provide relevant policies with the aim of achieving gender equality.

Dr Malte Sandner is a senior researcher in the department "Education, Training, and Employment Over the Life Course" at the IAB.

Ipek Yükselen is a researcher in the Department "Education, Training, and Employment over the Life Course" at the IAB.

More and more companies and administrations offer their employees working time accounts. Between 1999 and 2016, the proportion of companies using this instrument has almost doubled. Above all, models ...read more