The rise of online labour markets: freelancing and gig working via internet platforms

GUEST CONTRIBUTION Gig work apps’ food delivery drivers have become a familiar sight in many European cities. However, there is also a completely digital version of platform-mediated non-standard work. In online gig work, self-employed workers complete projects remotely for clients obtained through online labour platforms. Surveys suggest that similar proportions of European workers engage in online gig work and local gig work, yet the two differ significantly. The online gig economy is transnational and spans a full spectrum of skills, from data entry to software development. It offers an interesting view to the future of skills, social protection, and industrial relations in Europe.

Online labour platforms are websites that match buyers and sellers of work that can be performed remotely over the Internet, such as software development, translation, and data entry. Unlike ordinary job advertisement boards, these platforms mediate the entire relationship from matching and contracting to monitoring, billing, delivery, and dispute resolution. European Commission survey data reported by Annarosa Pesole and colleagues in 2018 suggests such online gig work is the main source of income for approximately one percent of adults across 14 EU member states. Data collected from the five largest platforms suggests that the market has grown globally approximately 25 percent over the past two years. Terms such as online freelancing, crowdwork, and microwork are also sometimes used to refer to the phenomenon or subsets of it.

Online labour platforms typically match workers and clients using a double auction model, where workers can submit bids to clients and vice versa. Worker remuneration is based on a fixed fee, hourly wage, or piece rate, from which the platform takes a cut. The relationship between the worker and the employer is typically framed as independent contracting, with the platform acting as an intermediary. But a key difference between online labour platforms and conventional contingent labour intermediaries is the online self-service model, which can result in very short hiring lead times and low overhead costs, but requires effort and expertise on the part of the hiring manager and candidate. Online labour platforms’ clients range from private individuals to some of the world’s largest companies as a 2017 study by Greetje F. Corporaal and Vili Lehdonvirta shows .

Demand from United States and Europe

The market for online gig work is highly transnational, with most transactions crossing national boundaries. According to the Online Labour Index, most demand by far comes from the Unites States (44 %), followed by the United Kingdom (8 %) and Australia (6 %). Approximately 2.5 % of the global demand comes from German employers, and European countries together represent approximately 23 %. Clients are thus mostly located in high-income countries, though India is also a fairly significant buyer, with a market share of 5 %. These market shares are depicted in Figure 1. The data is based on daily observations of all open vacancies posted on five of the largest platforms. 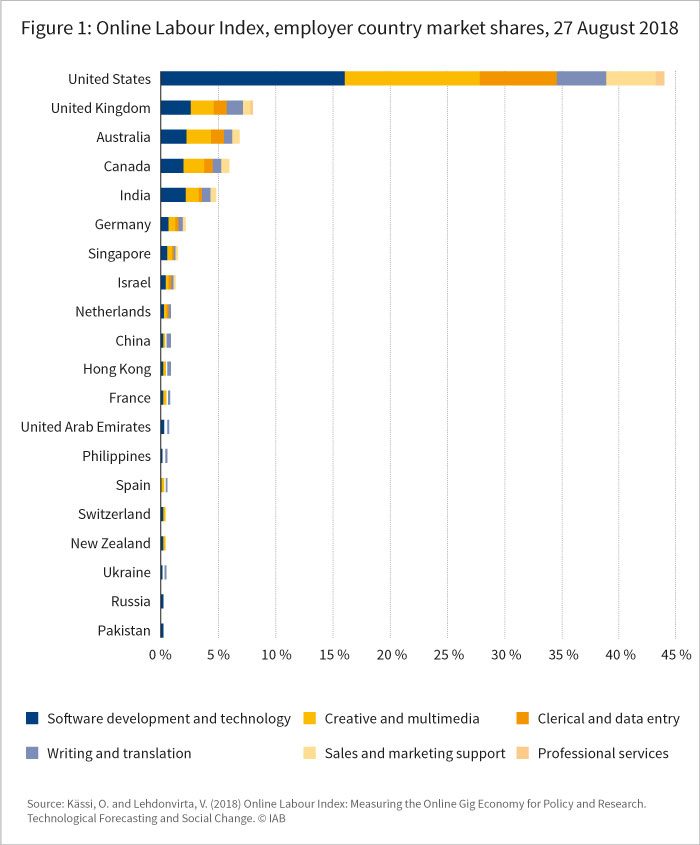 An important methodological caveat is that the Online Labour Index currently only tracks work completed on English-language platforms. Platforms in other languages enjoy only a fraction of the traffic of leading English-language platforms. So their inclusion would probably not radically shift these global market share figures. But platforms in other languages may be locally or regionally important, especially in specific occupational categories such as copywriting. Otto Kässi and Vili Lehdonvirta’s 2018 article provides details on the methodology behind the Online Labour Index.

The Online Labour Index worker supplement provides experimental statistics on the supply of online gig work. As shown in Figure 2, the supply is more geographically dispersed than the demand, and tends to come from lower-income countries. The majority of the workers are located in established business process outsourcing (BPO) destinations, such as India (26 %), Bangladesh (21 %), and the Philippines (5 %). A 2018 article by Vili Lehdonvirta and colleagues shows that there are spillovers between the conventional outsourcing industry and online gig work: some workers first gain experience at a conventional outsourcing provider and then become independent ‘micro-providers’ offering their services through platforms. For skilled outsourcing industry employees, online gig work offers potentially much improved earnings and autonomy, at the cost of diminished income security and irregular working hours. A 2018 article by Alex J. Wood and colleagues discusses the job quality experiences of online gig workers in lower-income countries. 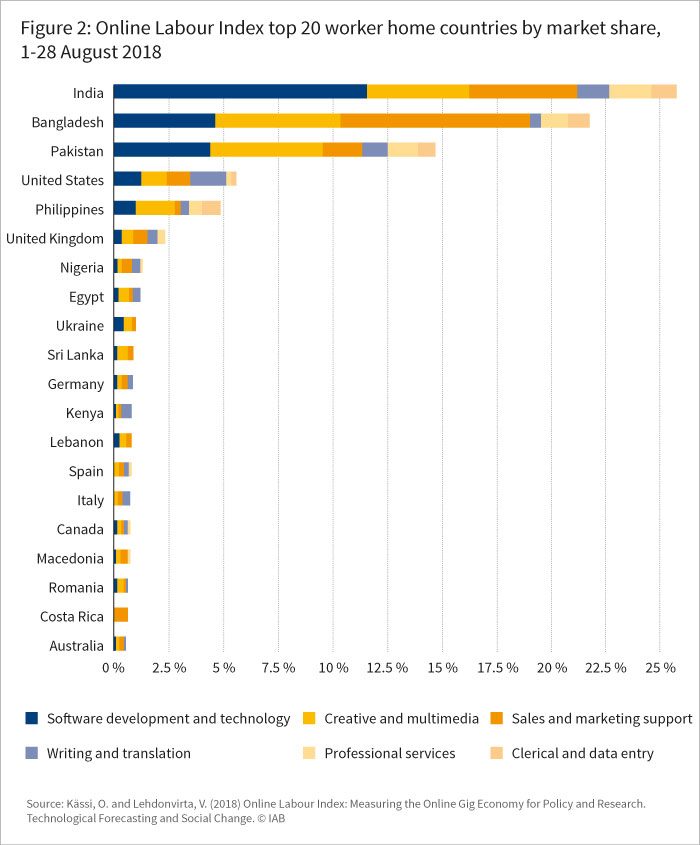 Although workers from lower-income countries dominate the overall numbers, in specific occupational categories the situation is different. For instance, as shown in Figure 3, the largest supplier of writing and translation workers is the United States. Countries such as Italy and Germany also supply significant numbers of writing and translation workers. They have a local language advantage since few people in lower-income countries speak their language. Therefore, Italian and German translators have less competition. 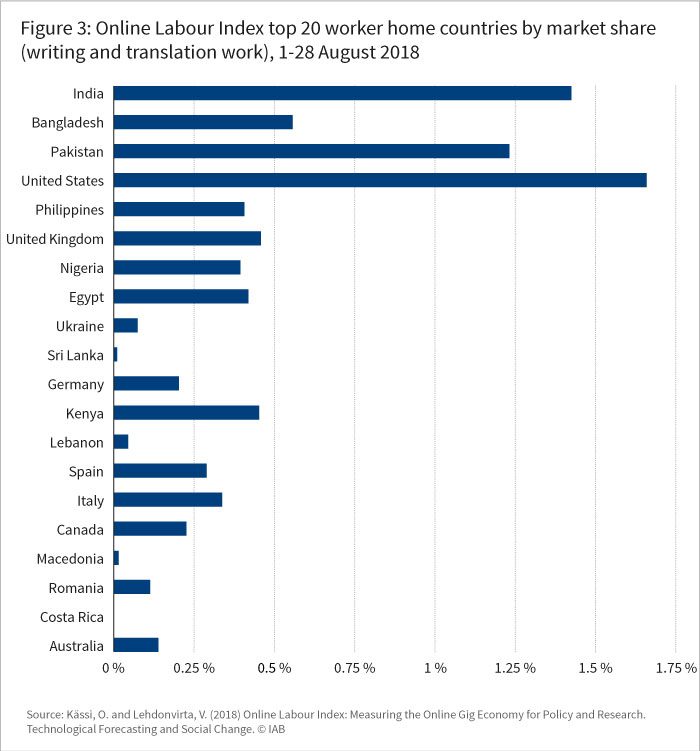 In general, online workers in higher-income countries are fewer in number but command much higher rates than their colleagues in lower-income countries. This maybe because they possess more specialized skills, but also because they enjoy more opportunities in their local labour markets, and are thus more selective about the projects they accept online, as argued in the above-mentioned article by Vili Lehdonvirta and colleagues.

The largest occupational categories in the market for online gig work are software development and technology, followed by creative and multimedia, with a market share of 36 and 25 %, respectively (see Figure 4). These are traditional freelancing occupations that appear to have found new venues online. Data entry and routine clerical tasks, the lower end of the market, represent only approximately 13 % of the market. Most online workers thus seem to be skilled freelancers who bring their specialisms to the market. A 2016 paper by Anoush Margaryan shows that online platform-based work is very learning-intensive, with most workers continuously engaging in informal and self-regulated learning practices to further their skills. 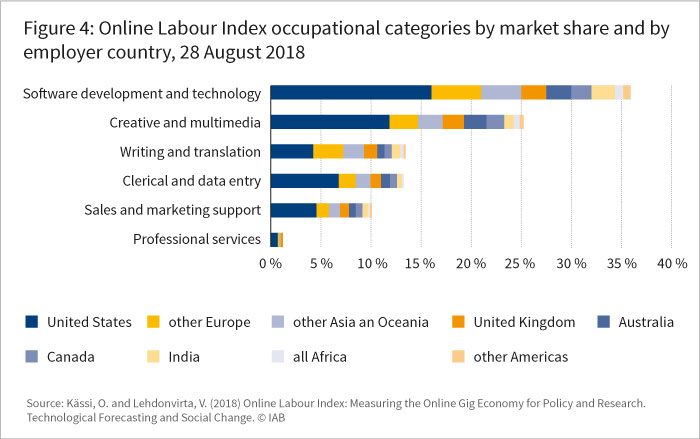 Views on a future labour market

Online gig work is a novel form of non-standard work that includes both skilled online freelancing and more routine forms of remote gig work. It transcends national markets and blurs boundaries between labour and outsourcing services markets. Although it remains rather marginal in size in relation to the overall European labour market, it appears to be growing rapidly and may have significant impacts in some occupational categories. Moreover, it can act as a window to future issues for broader European labour markets.

One future issue that online gig work can shed light on is the role of private certification schemes and other non-governmental regulatory frameworks in facilitating transnational labour mobility and responding to the impacts of rapid technological change. In online freelance work, workers signal their skills to potential clients using the platforms’ informal skill classification and certification systems. Formally recognized qualifications seem to play a much lesser role in facilitating skills matching on online labour markets, though this is currently being investigated by a project of the Oxford Internet Institute. This could point to a future in which labour markets increasingly rely on private digital schemes that are efficient and agile, but potentially also proprietary and difficult for publics to hold to account.

Another important issue is the future of social protection. Unlike some local gig workers whose legal classifications are contested, online gig workers and especially skilled online freelancers in Europe are most likely genuinely self-employed. But current social protection schemes do not necessarily afford sufficient protection for self-employed workers with multiple income streams, rapidly changing employers, and fluctuating levels of underemployment. Online workers face the further complication of earning much of their income from foreign sources, and also potentially being very mobile themselves. Ideally policy solutions should thus be sought on European or even broader multinational levels. Platforms with their extensive record keeping and control over payment flows could potentially form part of a multinational digital solution, as suggested by Enzo Weber in a 2018 paper (please also see  Enzo Weber’s article in the IAB-Forum here.)

Finally, a related issue is the future of industrial relations. Online workers are not organized into unions, and in many countries could not legally be organized even if they wanted to, since they are self-employed. At the same time, they share many interests and concerns by virtue of their situation – interests that they might wish to voice collectively towards governments and/or the platform companies that set many of the rules that shape their market. If conventional forms of collective voice do not serve self-employed workers, it is important to examine what alternatives they develop. A 2018 article by Alex J. Wood and colleagues shows that online freelancers have started to self-organize via social media.

Professor Vili Lehdonvirta is an Associate Professor and Senior Research Fellow at the Oxford Internet Institute, University of Oxford, a Faculty Fellow of the Alan Turing Institute, and Hugh Price Fellow of Jesus College, Oxford.