On the 1st January 2015, a nationwide statutory minimum wage of €8.50 was introduced in Germany. On 1st January 2017 it was then increased to €8.84. Prior to and during its introduction the economic policy debate focused mainly on the development of wages and the minimum wage’s possible effect on the level of employment. Besides negative employment effects, employer-reactions to the minimum wage are also possible, such as a work-intensification, an increase in the requirements placed upon new applicants, or stricter recruitment practices. This article sets out initial descriptive results for the development of employment and firm recruitment following the introduction of the minimum wage

The impact intensity of the minimum wage

Both factors determine the extent to which low earners may enjoy a higher hourly wage due to the minimum wage. However, workers affected by the minimum wage may not necessarily benefit from a wage increase; the minimum wage can also lead to job losses – especially in cases where the minimum wage exceeds the original wage which was paid according to employees’ productivity.

According to data from the IAB Establishment Panel, the share of workers affected by the minimum wage who work in companies with at least one socially insured employee was around 4.2 per cent nationwide in the third quarter of 2014. In the west, the share was comparatively low at about 2.9 percent; in eastern Germany it was more than twice as high at 10.6 percent. The Federal State level shows similar differences between East and West: while the States in eastern Germany exhibit a relatively high proportion of affected employees, the proportion is much lower in all western German States, especially in the south.

A similar picture is apparent for the share of employees who benefit from the minimum wage. In total, 6.2 percent of employees in Germany received a pay increase thanks to the minimum wage. This extrapolates to approximately 2.3 million employees (companies that do not have any employees subject to social security contributions are excluded). The proportion in eastern German Federal states lies at an average of 13.4 percent, which is well above the western average of 4.6 percent.

Average wage increases as a result of the minimum wage 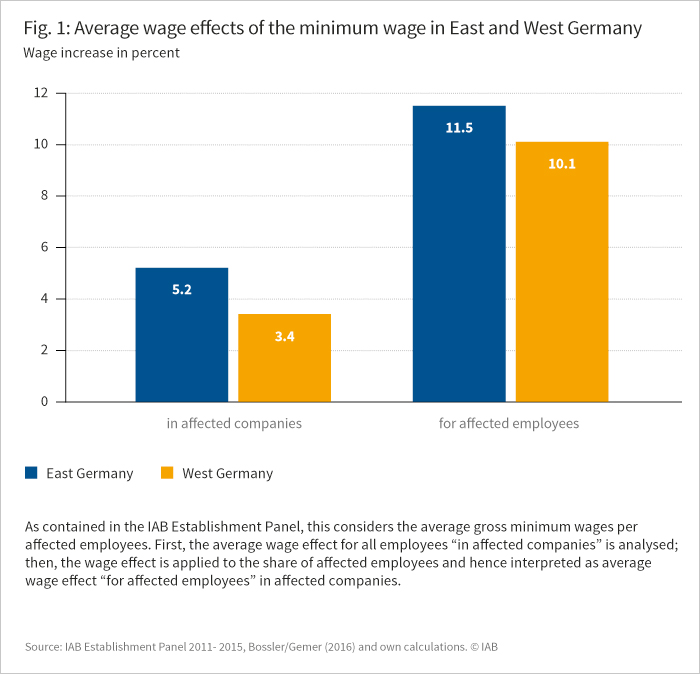 The development of overall employment

In view of the clearly perceptible impact intensity of the minimum wage, the question naturally arises as to how overall employment developed after its introduction. Information about this can be obtained from the “IAB Labour Market Survey” (see info box). Overall, the introduction of the statutory minimum wage coincided with a period of robust economic growth of 1.7 percent in 2015. This is likely to have contributed to a consistently strong increase in total employment in Germany in the year of the introduction of the statutory minimum wage and in subsequent years (see Figure 2).

In contrast to the consistently positive overall employment trend, marginal employment declined significantly due to the minimum wage . The seasonally adjusted number of individuals working in marginal employment fell by around 93,000 at the turn of the year 2014/2015. After this first clear reaction, there is another moderately declining trend until the end of the first quarter of 2017. 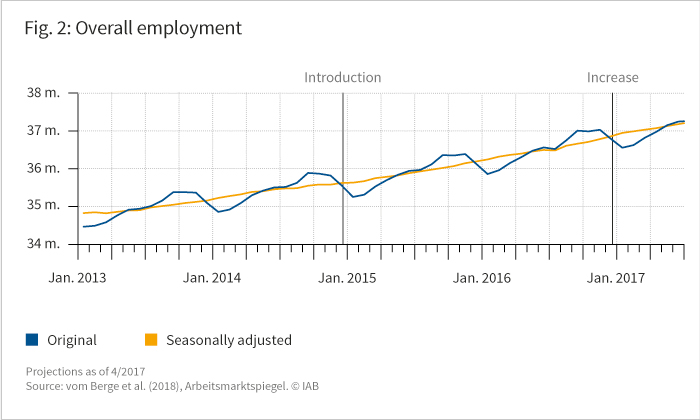 About half of the additional outflows from marginal employment at the turn of the year 2014/2015 – compared to the previous year – can be explained by transitions into standard employment subject to social security contributions; another 40 percent by transitions with an unknown target. The latter include, for example, cases in which individuals are taking up self-employment and are therefore no longer covered by the Federal Employment Agency; temporary or permanent inactivity (without claiming social security benefits); taking up work abroad; or retiring. By contrast, transitions into unemployment or benefit receipt hardly contributed to the increase in outflows from marginal employment.

A regional perspective allows to demonstrate that in the new (former East German) federal states – where the average wage level is lower than in western Germany – there was a comparatively stronger decline in exclusively marginal employment at the turn of 2015. This development continued in the following years.

In the eastern federal states, the number of people working solely in marginal forms of work decreased more in percentage terms than in the west (see Figure 3). Between the end of December 2014 and February 2017, the number of marginally employed persons in all eastern states fell by more than 4.2 percent (seasonally adjusted). During this period, the largest declines of more than 7 per cent were reached in the federal states of Bremen, Mecklenburg-Vorpommern, Saxony, and Saxony-Anhalt. 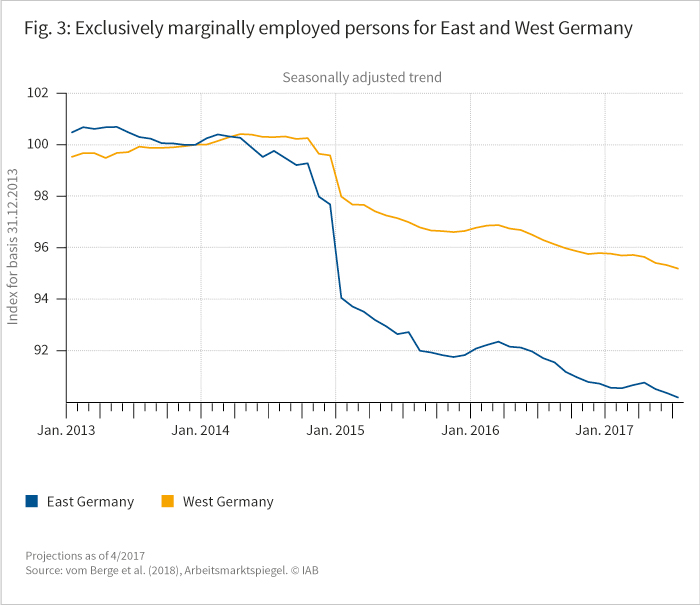 New recruitments at the minimum wage: employers’ requirements have increased and vacancies are harder to fill

For minimum-wage jobs, the duration for filling a vacancy has almost doubled

Another indication of staffing difficulties is highlighted by the duration of recruitment. Figure 4 presents these broken down by separate wage groups. While recruitment durations in the pay bracket just above the minimum wage (€8.51 to €10.38 per hour) have slightly decreased from 2014 to 2015, both recruitment and vacancy durations have increased markedly at the minimum wage. Here, the search for recruits lasted on average 51 days in 2015 – compared with 27 days in the previous year. In particular, the planned vacancy duration has increased: at 23 days in the previous year, this was only half as lengthy as in 2015. 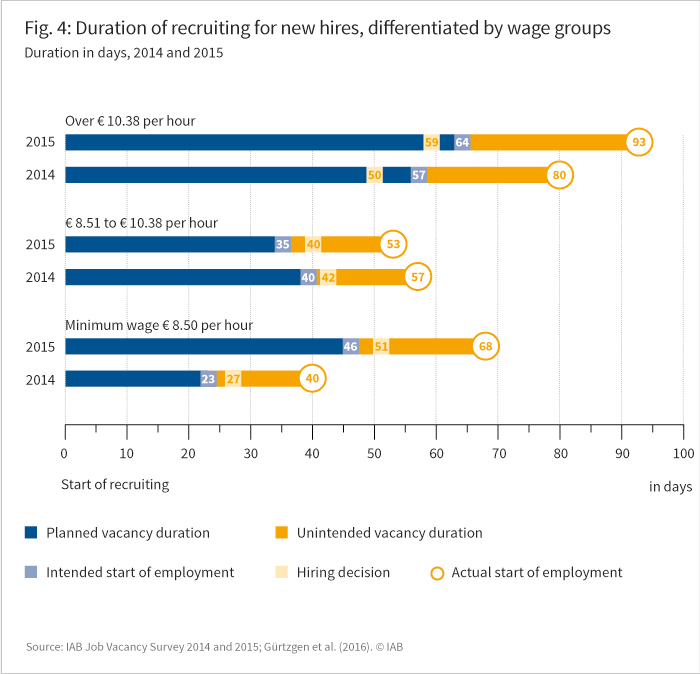 A possible explanation for increasing recruitment difficulties could be increased qualification requirements by employers. Given that the minimum wage increases company personnel costs, affected employers could aim to compensate for the wage increase at least partly by hiring more productive personnel. The employer’s requirements for the productivity potential of the applicants would then increase. The fact that this is actually the case is also shown when employers are asked directly why they are slower to fill vacant positions at minimum wage levels than in 2014. Among the obstacles to filling vacancies at the minimum wage level are inadequate professional qualifications; the applicant’s unwillingness to fulfil the working conditions required, as well as a too low number of applicants. These barriers have increased significantly compared to 2014.

It is noticeable that the significance of vocational qualifications as a recruitment obstacle in the remaining low-wage sector (€ 8.51 / h to € 10.38 / h) has not changed. Recruitment difficulties for positions advertised at the minimum wage thus seem to be accompanied by an increase in the skills required for these positions. The same applies to special knowledge and skills that go beyond formal qualifications. Here, too, companies have tightened their requirements. In particular, in 2014, only 10 percent of vacancies in the minimum wage sector required additional skills and knowledge, compared to 19 percent in 2015, an increase not found amongst higher paid jobs during the same period.

The introduction of the statutory minimum wage was heavily debated, especially concerning effects on wages and employment. In fact, employers in eastern Germany were affected much stronger than in western Germany, which is reflected by a larger fraction of affected employees and higher average wage increases. Looking at the employment development early in 2015, when the minimum wage was introduced, overall employment remained stable as it continued to grow as in previous years. The data also show a sharp reduction of marginal employment which is largely explained by transitions into regular employment. However, in the hiring process employers became more demanding for positions paid at the minimum wage.

The Labour Market Monitor is based on a novel dataset developed by the IAB on the basis of datasets captured by the Bundesagentur für Arbeit (BA). They have been developed in a way which allows for a tailored viewpoint specifically around the introduction of the minimum wage. It is thus an important supplement to official statistics. The developments presented in the labour market monitor are primarily descriptive and serve to provide early information on the latest labour-market developments. They cannot replace a comprehensive scientific evaluation of the minimum wage.

Mario Bossler is head of the working group “Minimum Wage” and senior researcher at the IAB in the research department “Labour Market Processes and Institutions”.

Johanna Eberle works as a researcher at the Research Data Centre (FDZ) of the Federal Employment Agency at the Institute for Employment Research since June 2013.

Nicole Gürtzgen has been head of the IAB research department „Labour market processes and institutions“ since October 2015.

After an internship at the Research Data Centre (FDZ) of the Federal Employment Agency at the Institute for Employment Wolfram Klosterhuber worked there until 2017.

Dr. Philipp vom Berge joined the Research Data Centre of the Federal Employment Agency as a researcher in 2011.

The gender wage gap in Europe: What can we learn from linked employer-employee data? A workshop report

The report presents a summary of the workshop "The gender wage gap in Europe: What can we learn from linked employer-employee data?". ...read more