Start-ups drive the development of the medium-sized enterprise sector, particularly in eastern Germany

Newly founded businesses play a major role in the generation of jobs and foster structural change in the economy. Furthermore, founders are generally rooted in the region in which they set up the new business. Start-ups are therefore particularly suited for developing a sustainable small and medium-sized enterprise sector.

The German Democratic Republic, or East Germany, was characterised by large enterprises. The socialist ideal consisted of monopolistic units, so-called combines, which were intended to operate with maximum efficiency due to their size. Small, privately owned businesses were virtually irrelevant. The upheavals that accompanied unification were therefore even greater.

Due to its membership of the Council for Mutual Economic Assistance (Comecon), the economic alliance of the socialist states, East Germany’s economy specialised in the manufacture of certain products within the alliance. Distribution was a purely logistical problem. Marketing and innovations aimed at acquiring new customers were unnecessary due to the shortage of consumer goods. This lack of competition resulted in products and services that were unable to compete after unification with those pouring into the eastern German market from western European countries.

Great hopes were therefore associated with the new businesses that were founded after reunification. They were expected to drive forward the long overdue structural change in the economy and to create new, sustainable jobs. In the medium term, it was hoped that these young businesses would lead to the creation and development of a small and medium-sized enterprise sector (SME) in eastern Germany. Together with the large enterprises that had been sold by the Treuhand privatisation agency and modernised, they were expected to become the heart of the eastern German economy.

The extent to which these expectations have been fulfilled can be investigated using data from the so-called Establishment History File (Betriebs-Historik-Datei) compiled by the IAB, which contains data for eastern Germany from 1993 onwards that can be analysed.

In fact, a particularly large number of businesses were founded in eastern Germany during the 1990s (see Figure 1). In 1993 alone, 71,000 start-ups were counted. In western Germany the figure was only 40,000 higher, even though only a good 17 percent of the labour force was living in eastern Germany at that time. That was equivalent to almost eight start-ups for every 1000 people in eastern Germany, compared to 2.5 start-ups in the western part of the country. 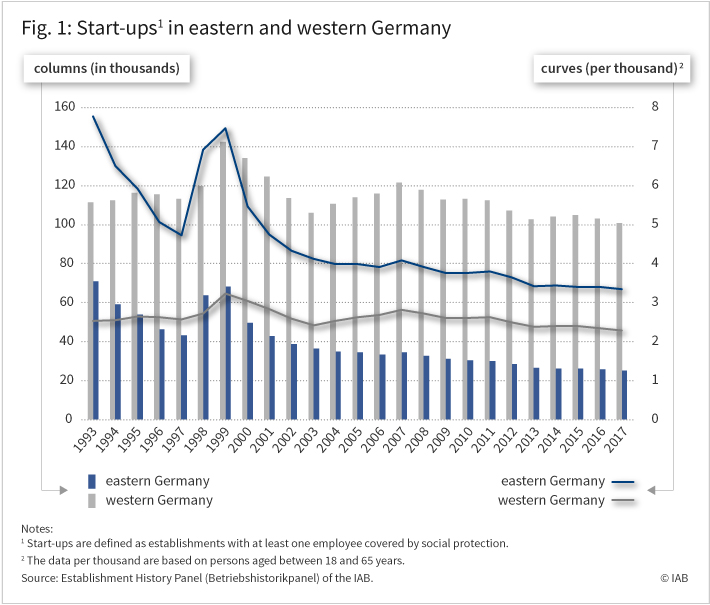 Many of these early start-ups are the result of the rapid increase in unemployment that was caused by the collapse of East Germany’s large enterprises, so called “necessity-start-ups”. In a study of eastern German start-ups conducted by Eva May-Strobel and Monika Paulini in 1990, 43 percent of the founders surveyed reported that unemployment was a reason for them to start up a business. However, the transition from a socialist planned economy to a free market economy brought considerable opportunities for new businesses since there was great interest in new products at that time and initially only little competition.

By 1997 the number of start-ups had fallen to about 40,000 in eastern Germany. Start-up activity then picked up again considerably in both west and east until roughly the end of the millennium in the course of the so-called dot-com bubble, before decreasing again rapidly. At the same time, the start-up intensity in eastern Germany remained significantly stronger than that in western Germany every year.

Examining the development of start-up activity within eastern Germany, it is evident that there has been a shift in the regional distribution over time (see Figures 2a and 2b). During the first decade following unification an exceptionally large number of new businesses were founded all over eastern Germany. It was not until the start of the new millennium that an internal differentiation started to take place.

Especially Berlin has gained in importance over the years: in 1993 Berlin accounted for 15 percent of all start-ups in eastern Germany, reaching 25 percent ten years later and as high as 36 percent by 2017. In addition to Berlin and its neighbouring districts, eastern Germany’s start-up activity is concentrated in Leipzig and in a cluster around the island of Rügen, which consists primarily of start-ups associated with tourism. In contrast, the number of start-ups in other parts of eastern Germany has been falling considerably for some years now.

What is particularly noteworthy is that in the meantime the share of necessity start-ups has become far smaller in eastern than in western Germany. According to the IAB/ZEW Start-up Panel, the initially large share fell to 6 percent in 2017 – about 5 percentage points less than in the west. 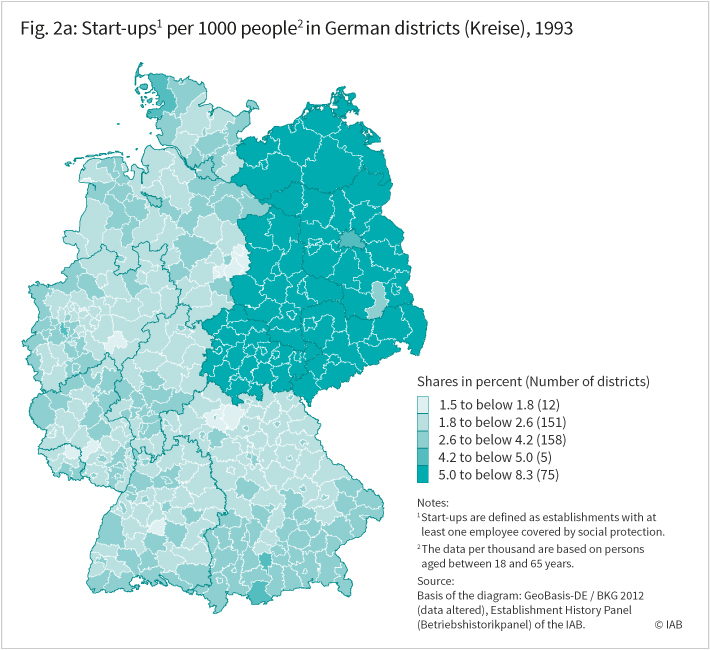 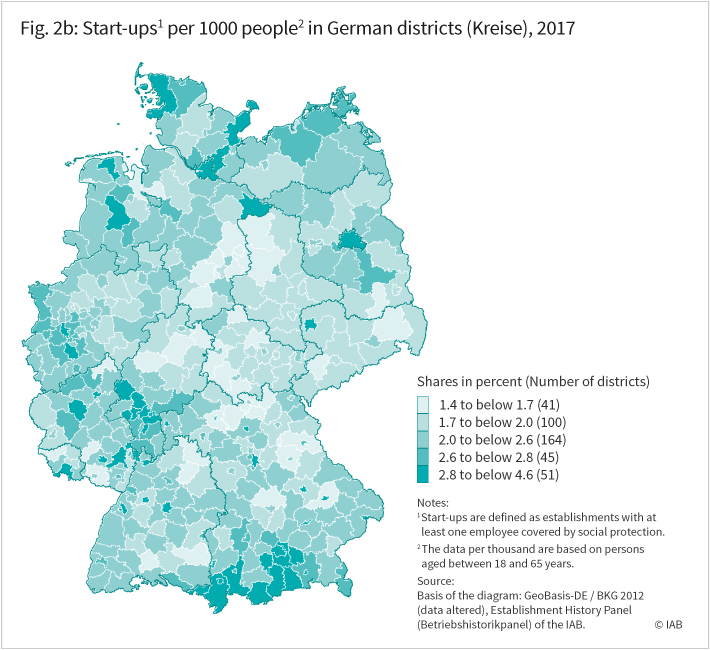 However, simply comparing the number of start-ups can easily be misleading, as many new businesses fail to become established and are soon closed down. There are multiple reasons for this. For instance, abandoning a business idea is by no means always a personal catastrophe for the founder. Yet this does not contradict the fact that only start-ups that are able to sustain their position on the market for some time also results in significant employment effects.

Many young businesses do not survive long and most of those that do survive remain small. On average about 40 percent of start-ups are already closed down before their third year of business. And this despite the fact that this study only considers enterprises with at least one employee, in other words businesses that already possess a certain amount of substance.

Over time it can be seen that businesses that were founded in eastern Germany before 1996 typically had a better chance of survival than those in western Germany. This changed with the beginning of the dot-com bubble around the turn of the millennium. During that time, western German start-ups had an advantage, as a larger proportion of them survived the first three years than was the case for their eastern German counterparts.

Considerably larger differences are found with regard to the growth of the young firms, however. Especially establishments that were founded in eastern Germany in the years following reunification were highly successful. After three years they already had an average of 6.5 employees – 2.4 employees more than their western German counterparts.

The eastern part of Germany is therefore more strongly characterised by young businesses than the western part. In 2017 more than one in three workers in eastern Germany was working in a firm founded since 1993. In western Germany this applies to only one in four workers (see Figure 3). This disparity can largely be attributed to the establishments that were founded shortly after unification and had expanded their workforce considerably by 2017.

The importance of the early start-ups is also reflected in the fact that, not only in Berlin but also in a great many other eastern German regions, more than 30 percent of all workers are employed in such firms. A concentration on Berlin, such as that visible for the start-up rates (see Figure 3), has not yet emerged in this respect. 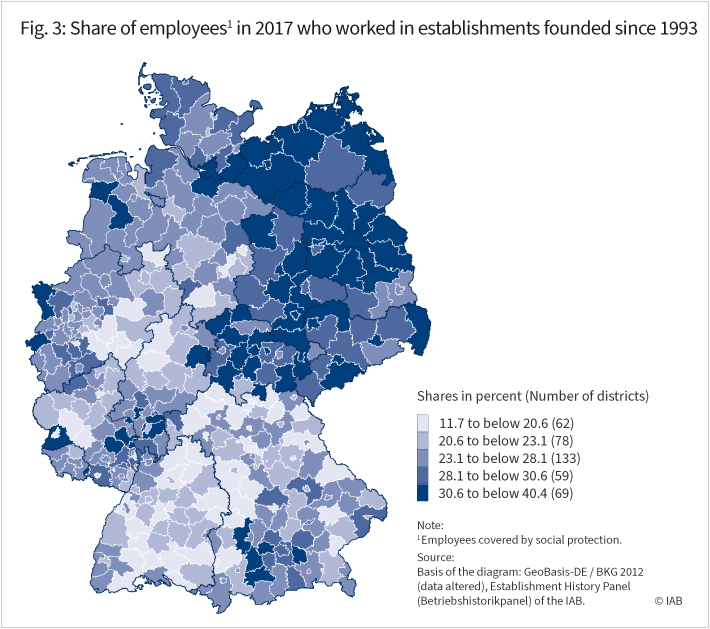 Small and medium-sized firms form the backbone of many western German regions; they are regarded as having a special connection with their region. In the German Democratic Republic, on the other hand, the nationalisation of private enterprises had put an end to the small and medium-sized businesses there. It was therefore only possible to rebuild an SME sector with clear regional roots by founding new businesses with appropriate potential.

Most founders are already residents in the region in which they set up their business. Although it is not uncommon for successful young businesses to relocate, such relocations typically occur locally.

Especially the business that started during the first few years after unification are likely to have contributed substantially to the development of an SME sector in eastern Germany. However, it is not possible to assess precisely whether this is the case on the basis of the available information.

If the number of employees is taken as the main criterion for an SME, it becomes clear that in eastern Germany relatively more people work in establishments with up to 250 employees, at 73 percent, than is the case in western Germany, where the figure is 67 percent (see Figure 4). This is in line with the finding concerning the lower average age of the businesses and the stronger start-up dynamics in the east. 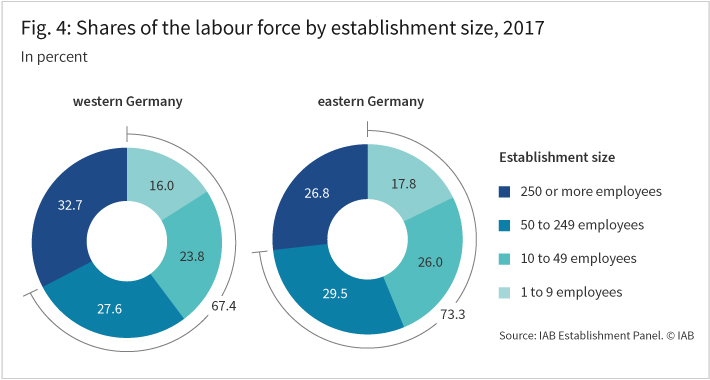 The comparatively strong start-up activity and the considerable success of the young firms have made a substantial contribution to job creation in eastern Germany. However, it is worrying that in the meantime there has been a concentration of these young businesses in Berlin. Especially in eastern Germany’s rural and more remote regions, the propensity to set up a business is far lower.

This shows how important centres are as development cores. Young companies in particular are often dependent on sufficient local demand, which is a given in a large and growing metropolitan region like Berlin. However, young companies also need access to a relatively inexpensive labour supply, because in their first years they can only pay lower wages on average than older companies. Both of these conditions were (and are) fulfilled in Berlin. Furthermore, although the share of smaller establishments is larger in eastern Germany than it is in the western part of the country, a far larger proportion of the establishments have non-resident, in other words mainly western German, owners. This points to structural disparities: unlike firms whose owners and founders come from the region where the firm is located, the autonomy of subsidiaries is substantially restricted. It can therefore be concluded that, even 30 years after unification, autonomous SMEs continue to play a less important role in eastern Germany than they do in western Germany.

Dr Lisa Bellmann is a researcher in the research unit "Regional Labour Markets" at the IAB.

Udo Brixy is a senior researcher in the research unit "Regional Labour Markets" at the IAB.

Anna D’Ambrosio is an Assistant Professor of Applied Economics at the Polytechnic of Turin (Italy).

Why digitisation affects some German federal states more than others

The extent to which jobs in the German federal state could be replaced by digitisation largely depends on sectoral and occupational structure in the region. ...read more

The German labour market in a nutshell

In the late 1990s and early 2000s, Germany’s labour market was in such a poor state that the country was described as ’the sick man of Europe’. Since 2005, the German labour market has been ...read more