What is driving Germany’s continued upturn in employment? It has been a while since Hartz reforms and business cycles have lost much of their importance for the labour market. Decisive for the upward trend is a self-reinforcing effect: in view of the increasing scarcity of labour, employers are securing valuable manpower for themselves.

Right after the Hartz reforms, the German labour market started to improve tremendously. Thus, there is currently a lot of discussion about what these reforms have contributed to the German labour market upswing – and whether they should be replicated elsewhere. As important as these reforms may have been in order to leave the times of mass unemployment behind, one thing should be thought of: The strong upward trend in employment continues to this day, one and a half decades after the reforms! It is hard to imagine that a reform impulse would still bring additional improvements over such a long period of time.

The role of the business cycle

What could be more obvious than to identify the business cycle as the decisive driver of employment? However, the argument does not hold: The average economic growth since the reforms has been 1.4 percent per year. This is quite mediocre and certainly no reason for an upturn in employment. In addition, it is also evident again today that the economy has weakened sharply since mid-2018, but the employment trend is continuing, though at a lower speed.

In fact, IAB research results published by Sabine Klinger and Enzo Weber in 2014 and forthcoming in 2020 (online already available in 2019) show that the impact of the economy on employment has become significantly weaker since the great recession of 2009. The “linkage coefficient” in Figure 1 shows this impact. In the past, a change in economic growth of one percentage point translated into almost 0.4 percent employment growth. Today, it is only a third of this value. This decline is of persistent nature, as the permanent component shows. The permanent component mirrors the persistent trend of the linkage coefficient, while the transitory component contains cyclical fluctuations. First of all, this decline is due to the change in the economic structure: many growing service industries are much less cyclical than manufacturing industries. This is particularly evident in the employment boom in nursing or education, for example, where the many jobs are certainly not created as a result of a good economy. Above all, however, it is a consequence of the fact that available labour supply in Germany has become much scarcer in the meantime. This dampens the employment effect of weak orders, as companies want to avoid long and expensive recruitment processes afterwards. 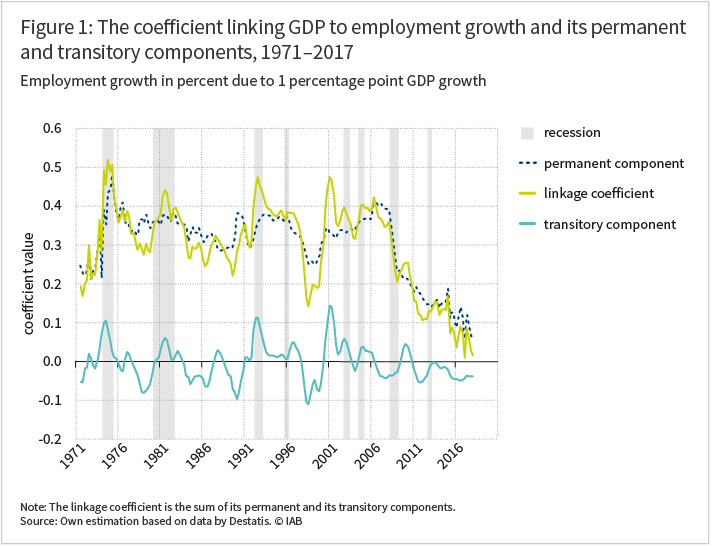 The importance of labour market tightness

The reduced relevance of the gross domestic product growth for the labour market is also visible from Figure 2. While the gross domestic product used to be a strong driver of employment in the past, it has been substituted – instead of accompanied – by other economic indicators since the great recession. Diving deeper into what these indicators are, Sabine Klinger and Enzo Weber find labour market tightness to be one of the two most important reasons why employment continues to increase – irrespective of the economic situation. In view of scarcity, employers are securing valuable manpower for themselves; in other words, they hire new employees when they have the chance and keep those already employed by them. For example, Judith Czepek and her colleagues showed in two studies in 2015 and 2017 that companies make considerable offers to keep even employees entitled to a pension, especially when these are difficult to replace. 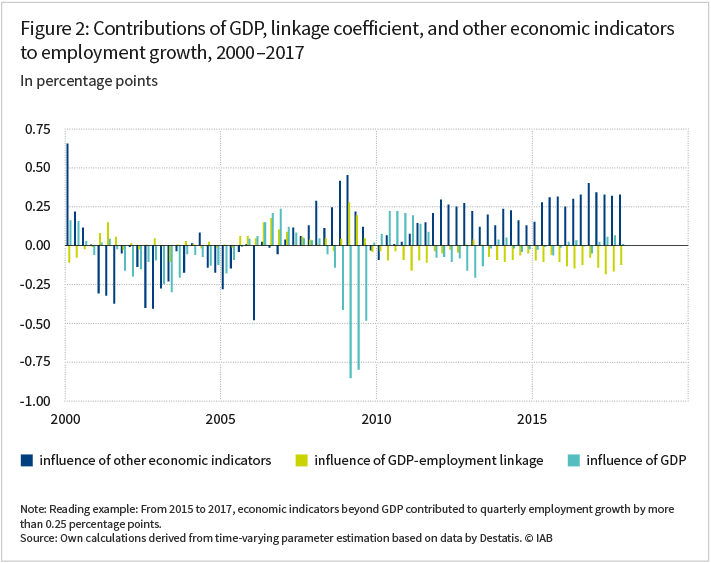 Accordingly, the layoff rate has fallen to the present day and is now at by far the lowest level since reunification. Sabine Klinger and Enzo Weber found in a study in 2016 that this persistent drop in the layoff rate in the period after the Hartz reforms (2005-2011) has made the greatest contribution to reducing the unemployment trend. In contrast to one-off reform effects, the effect of the labour market tightness can explain the long-term development, because there is a self-reinforcing effect: in the course of the labour market upswing , workers became scarcer, with the described effects on the hiring and dismissal behaviour of companies. The strong upward trend in employment then further increased the tightness. From 2006 to 2018, this effect of labour market scarcity accounts for a good third of the total employment upswing of almost six million jobs. Particularly in the 2010s, this channel plays a decisive role in employment development in view of the constantly rising tightness.

Outlook on the future labour market

Obviously, however, this self-reinforcing effect cannot continue in the long term. If scarcity continues to rise, the scope for additional employment growth will become smaller and smaller. This is also due to the fact that the demographic change, especially the retirement of the baby boomers, is having an increasingly negative effect on the number of workers in Germany. In fact, this should begin to dampen employment development already in the short term, as the IAB has recently forecasted (IAB-Kurzbericht 07/2019).

However, the employment trend has so far been supported not only by scarcity but also by another factor – the very high level of immigration to Germany, as well as the increasing labour force participation of women and older people. Without these increases, employment would not have been able to expand nearly as strongly. And so, two factors came together for the labour market boom: The growing scarcity kept job creation going, but the workforce was still expanding enough to provide the space it needed. The first factor will remain, but the second will increasingly come up against its limits in the coming years.

Dr Sabine Klinger is senior researcher in the research department "Forecasts and Structural Analyses" at the IAB.

In order to analyse the mechanisms behind the dropping employment figures, this article gives an outline of developments in labour market flow statistics in Europe after the outbreak of the Covid-19 ...read more

Smoothing labour market transitions in times of crisis and beyond

Short-time work, layoffs, and new hires in Germany: how the corona crisis differs from the financial crisis of 2009

The corona crisis has impacted the German economy and labour market much more heavily than the financial crisis of 2009. Nevertheless, the number of layoffs has so far been limited compared to the ...read more