Protectionism and the argument for creating jobs at home

In the political debate, trade protectionism has been frequently associated with keeping and increasing the number of jobs at home. The argument is, however, not so simple, since international trade in products and services is organised within global value chains. Goods that are further processed and not used for final consumption play a key role in international commerce. Increasing trade barriers for those so-called “intermediates” can be particularly costly for an economy and lead to job losses in connected industries.

Trade protectionists aim at increasing production at home, either as a result of higher output of local companies or through higher foreign direct investment. Importing becomes more expensive and local companies would produce more to substitute for the fewer imports. Multinational firms would invest in production facilities close to the consumers to avoid trade barriers. The political intention is to increase local employment in the industry that is being protected, by saving jobs and creating new ones. 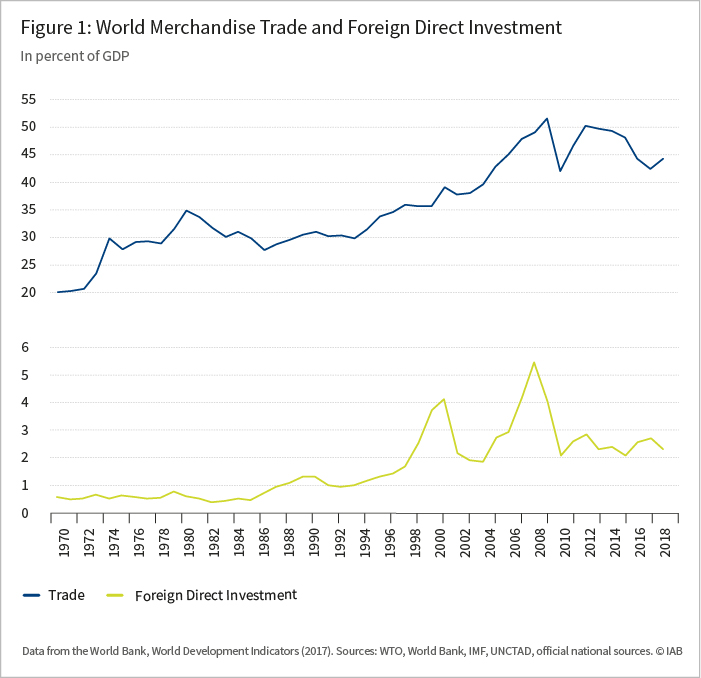 The positive correlation can be explained to some extent with the presence of trade in intermediate goods. A single product can consist of multiple parts, which in turn can be produced in many different locations. Final assembly and customer support associated with the product do not have to be physically based in the same country either. The fractionalization of the production process and offshoring contribute to higher trade volumes and frequently involve large investments abroad. Global value chains are a predominant force in contemporary international trade. Intermediate goods, which are part of global value chains represent a large share of international trade.

Figure 2 shows the share of intermediate goods in all imports into Germany from a few selected countries. For instance in 2017, 58 percent of all imported primary and manufactured goods from the US into Germany were intermediate goods – in other words: goods that are further used in the production process and not intended for final consumption, for example paper for books or newspapers. 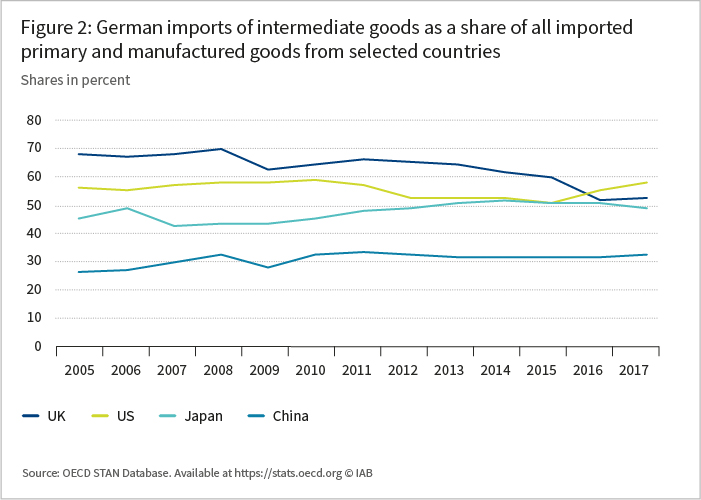 The economists Mary Amiti and Jozef Konings have shown in their 2007 study that liberalizing trade for intermediate goods can be particularly beneficial to productivity growth, even more than reducing trade barriers for final goods. Reversing this argument: protectionism can be more harmful if it targets intermediate goods, at the very least due to lost opportunities for economic growth.

By looking at Figure 2, one could conclude that increasing trade barriers on all US imports into Germany is likely to be more costly in comparison to a trade conflict with China. Of course, one needs to keep in mind the trade volumes as well (see Figure 3). In 2017, the largest trading partner of Germany when it comes to imports of all types of goods was China, the US come in the fourth place with six percent and the UK in the eleventh place with three percent of all German imports.

Recently, the US has imposed tariffs on steel and aluminium, a trade conflict between the US and China has developed and is currently escalating. The exit of the United Kingdom from the European Union can also lead to substantial trade barriers if an agreement is not reached. In this context, it is important to understand that industries are very much interconnected. Changing policy in one industry can have strong implications for another. To analyse the economic effects of protectionism one needs to look at the broad context and go beyond a single product or industry. Trade barriers will very likely disrupt already established production chains and lead to lower foreign direct investment levels, consistent with the positive correlation between trade and foreign direct investment in the data. In turn this would be detrimental for global production and employment.

Focusing on trade policy, multilateral reduction of trade barriers benefits the world economy and employment. Arguments in favour of protectionism for the creation of jobs should always be discussed in a broader context. Saving a few jobs in one industry, can be accompanied with putting in danger many more jobs in related industries. The connection does not extend only to other producing industries, but also to services: customer support, marketing or distribution networks provide local jobs as well. Even if a country manages to avoid retaliation to its protectionist trade policies, it harms its economy depending on how connected the protected products or industries are.

Stepanok, Ignat (2019): Protectionism and the argument for creating jobs at home, In: IAB-Forum 23rd of May 2019, https://www.iab-forum.de/en/protectionism-and-the-argument-for-creating-jobs-at-home/, Retrieved: 21st of May 2022