In times of economic crisis, Germany’s large vocational training segment comes even more to the fore as prime model for reducing the risk of youth unemployment. A growing number of pupils continue school and pursue academic education. Still, vocational training remains important for school leavers from lower and intermediate secondary schools. These young people are confronted in their teenage years with the difficult decision for one occupation out of more than 400 options.

When choosing an occupation, young people navigate between personal interests, social expectations, requirements of the vocational education system, and market conditions. It becomes apparent that the majority of trainees do not learn the occupation they aspired at school. Only a minority of them, however, have to make concessions with regard to their occupation trained for. Many can even improve their situation.

Astronaut, firefighter, nurse – various interests and talents play a role in the occupational choices of young people. Youths also consider the social status of a given occupation and whether they anticipate positive feedback from their family and friends. This is the result, for example, of a 2015 study for German students by Verena Eberhard, Stephanie Matthes and Joachim Gerd Ulrich.

Income and prestige are important to youths, though not solely. Skill level, job security, and aspects of compatibility with family and private life are important factors for choosing their occupation as well. However, some of these factors are weighted slightly differently among young men and young women. A 2015 study by Anne Busch-Heizmann shows, for example, that job security, income and career opportunities are more important to young men than to young women. However, there are no gender-related differences in other aspects such as work-life balance.

There are a number of vocational orientation programmes in Germany to support youths in developing realistic occupational ideas and objectives. Youths feel the pressure to prepare well for occupational choice. They do not take it for granted to make their occupational aspirations a reality, this is how the youth researcher Klaus Hurrelmann sums up the results of a 2019 study on career orientation. When young people are searching and applying for a vocational training position at the latest, they come face to face with the formal requirements of the German vocational education system (see the info box “Germany’s vocational education system”). If their efforts in the application process are not successful for the initially aspired occupation, they might have to consider other occupations.

Against this background, the question arises as to whether young people know enough about the opportunities and requirements of the vocational education system in order to be able to evaluate their chances appropriately in advance. Therefore, they are frequently forced to accept compromises in their choice of an occupation trained for. If, for example, their occupational aspirations are too ambitious, they have to settle for training positions that are available more easily. At least, a 2009 study by Martin Tomasik, Sam Hardy, Claudia Haas, and Jutta Heckhausen shows that youths who lower their aspirations during the last school year increase their chances for a training position. In light of the broadness of the vocational education system and the manifold occupational alternatives, it is not easy for young people to realistically assess their opportunities and the competition for a training position.

Over the past decade, matching problems have become noticeable on the apprenticeship market, as documented in the vocational training reports by the Federal Ministry of Education and Research and addressed in recent research such as a 2019 study by Sandra Dummert, Ute Leber, and Barbara Schwengler. At the beginning of the vocational training year 2019, there were approx. 70,000 applicants without a training position and approx. 50,000 vacant vocational training positions. While the number of unplaced applicants has decreased slightly over previous years, the number of vacant training positions has increased steadily. Despite the generally positive economic development up to the beginning of 2020, the matching problems increased. The unemployment rate declined slightly during the 2010s, in the group of people under the age of 25 it decreased from 6 percent in 2011 to 4.5 percent in 2019.

Evaluations from the National Educational Panel show to what extent youths are trained in an occupation that differs from their original occupational aspiration. Trainees in establishments and fully-qualifying schools who left the tenth grade of lower or intermediate secondary school in 2012 or later were examined (see info box “Data”). At the end of the ninth grade at school, these trainees were asked what occupation they will probably take up one day. About half of the trainees surveyed took up an occupation that did not match their occupational aspirations specified at school. For another third, there was no information on the occupational aspiration from ninth grade available – for example, because they had not formulated any or no specific occupation. 16 percent of the trainees examined entered vocational training in their original favourite occupation.

But what exactly do the compromises look like when taking up vocational training? The fact that occupations differ in several dimensions allows for differentiated insights into the types of compromises accepted. For example, a medical assistant trainee who originally wanted to become a nurse might have to cope with lower wages, but on the other hand may not have to work weekends or night shifts.

In the following, the differences between the occupations trained for of youths and the occupational aspirations they had at school are described using eight indicators. Dimensions of interest here are those that are relevant for the later social position of the young people in society. Therefore, traditional socioeconomic status indicators such as wage, prestige, and qualification level in the occupations as well as security due to employment stability and career prospects, which exist particularly in large establishments, are analysed. Additionally, social fit of occupational life via socially compatible working hours without regular weekend and shift work as well as the compatibility of private life and career due to part-time options are important. Since this is closely related to the occupational labour markets for men and women, the share of women in a given occupation is analysed as well. 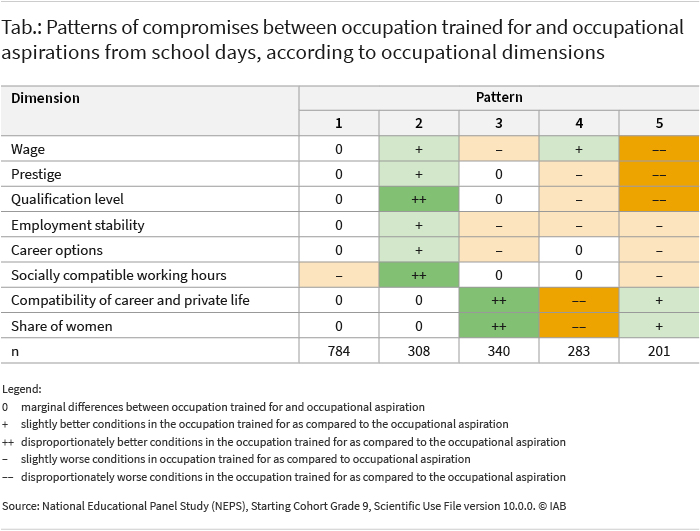 Some of the five patterns identified differ between young men and women (see figure): 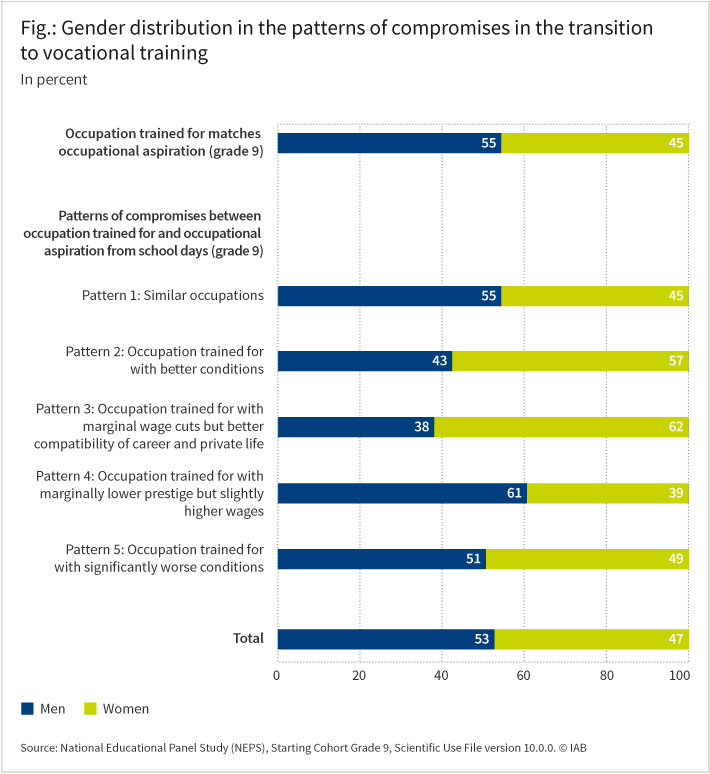 The manifold facets of accepting compromises when transitioning from school to occupational life reflect the readiness for adjustments as well as the youths’ opportunities on the vocational training market. Although the youths specified concrete occupational aspirations already at school, searching for a training position and deciding for an initial occupation is associated with further efforts. Along the occupational status dimensions analysed here, it can be seen how decisive this step is for further opportunities in life.

Further analyses pursue the question of social differences in the patterns of accepting compromises. Initial results point to the significance of school-leaving qualifications and school grades while the family background and the resulting support options when transitioning from school to work are of little additional significance.

As compared to trainees from intermediate secondary school, trainees from lower secondary school accept compromises more frequently, but also in this case not only towards occupations with worse conditions. Already during their school days, their aspirations are lower. In comparison, trainees having ambitious aspirations in the ninth grade, especially in view of academic occupations, make concessions, because there is no occupational equivalent in vocational training at first. Whether they pursue the academic track later on is currently still an unanswered question.

Moreover, the compromise patterns shown are partly gender-specific. More men choose slightly better paid occupations having less prestige and job security. Young women, in contrast, tend towards occupations that are better compatible with family commitments and rather accept occupations with worse career opportunities than men. These compromise types play a particularly important role in the segment of apprenticeships in crafts, industry, and commerce which are rather male-dominated, as well as in the school-based vocational training segment of pedagogy, social and health occupations which are rather female-dominated.

The compromise types describe one piece in the puzzle in the German model of transitioning from school to work. Internationally, the strong vocational training system attracts attention in its function as an entry labour market that provides a smooth transition for many young people and particularly integrates low-qualified young people. On the one hand, school-leavers interested in vocational training find diverse occupational opportunities. On the other hand, in the competitive system, many have to give up their initial occupational aspirations.

Currently, many youths ask themselves how the Covid-19 crisis might affect their opportunities in the choice of occupation. According to the statistics of the Federal Employment Agency, slightly fewer vocational training positions than in the previous year were reported in 2020. A decline in in-company vocational training positions was reported above all in metal and electrical engineering occupations, the hairdressing trade, in the food service and hotel industry, in commercial motor traffic as well as in computer sciences and the commercial sector. Although the vocational training market has recovered in parts with the start of the new training year in autumn, the youths have probably been experiencing a noticeable limitation in selection options in the current crisis situation. The pressure to make compromises might further increase. There is much to suggest that the manifold compromise patterns outlined here will also exist in the future.

In this study, a representative sample of students in the ninth grade at regular schools in Germany was interviewed regarding their occupational history in the school year 2010/2011 for the first time, and regular interviews have taken place ever since. For the analyses presented here, 3,676 students among the participants were selected who completed school in the calendar year 2012 or later after tenth grade and took up vocational training during the observation period. The extent and distribution of compromise patterns described in this contribution is thus not representative for a specific year and is not weighted. The parameters still illustrate their relative significance among young people entering vocational training.

To describe the acceptance of compromises, the first occupation trained for of the youths was compared with their realistic occupational aspiration from their school days. Both occupations trained for and occupational aspirations were linked with aggregated information on eight characteristics at the occupational level which were calculated from the Microcensus (MC) and/or the sample of the Integrated Employment Biographies (Stichprobe der Integrierten Arbeitsmarktbiografien, SIAB) for the years 2008 to 2010:

For each characteristics dimension, the difference between the occupation trained for and the occupational aspiration from school days was calculated. The differences in the eight characteristics dimensions are adopted in a cluster analysis. In this study, the cluster analysis identifies compromise patterns by summarising those trainees observed whose occupation trained for differs from their occupational aspiration in a similar way in all characteristics. To group the trainees, the hierarchic cluster process according to Ward as well as subsequently the partitioning K-Means process was applied.

Lea Ahrens is a member of the scientific staff at the Leibniz Institute for Educational Trajectories (LIfBi).

Melanie Fischer is a researcher in the area of Labour Market Sociology at the Friedrich-Alexander-Universität Erlangen-Nürnberg.

Corinna Kleinert is Professor of Sociology at the University of Bamberg and Head of the Department “Educational Decisions and Processes, Migration, Returns to Education” at the Leibniz Institute for Educational Trajectories.

Dr Brigitte Schels is researcher in the department "Joblessness and Social Inclusion" at the IAB and Assistant Professor at the Friedrich-Alexander-University of Erlangen-Nuremberg (FAU).

Most jobs in essential occupations in Germany have relatively good working conditions. Yet a substantial share of jobs has bad ones, and here migrants are ...read more

Refugee women take for multiple reasons longer to be integrated into the German labour market than men. ...read more