According to internationally harmonised unemployment statistics, 2.4 million people in Germany were unemployed for a year or longer in 2005; in 2014 this number had dropped to 918,000. This data is based on the European Union Labour Force Survey, which applies a unified definition of unemployment in all EU Member States. Under this definition, an unemployed person is someone who is not undertaking any gainful employment for more than one hour per week; and who is looking for and is available to work.

The contrary trend in Germany compared with other European countries is also reflected in the long-term unemployment rates. Whilst the German rate – measured in terms of the total labour force – was still above the EU average in 2008, it fell to 2.2 percent by 2014, thus dropping to a level not much higher than in those EU countries which traditionally low long-term unemployment rates. Despite this positive development, the share of long-term unemployed people – measured as a share of all unemployed – is still higher in Germany than in many other EU countries. While more than 40 percent of unemployed people in Germany are out of work for more than a year, it is less than 25 percent in Austria and Denmark and 20 percent in Sweden. What is particularly striking is that 17 percent of all unemployed people in Germany have been out of work for four years or more – far more than in comparable countries and four percentage points above the average amongst the “old” EU-15 countries (see Figure 1). 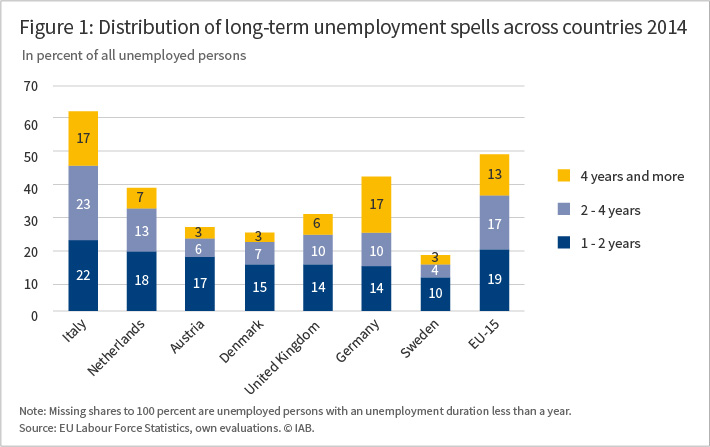 Other forms of long-term non-employment

It would however be premature to conclude that the extent of structural unemployment in Germany is exceptionally high. This is because long-term unemployment is not the only form of long-term exclusion from the labour market. Other forms of long-term non-employment cover two groups in particular: those of working age who are on early retirement, and those on incapacity benefits with health-related barriers. According to international employment statistics, these groups are statistically considered as inactive, i.e. neither employed nor (long-term) unemployed.

Across countries, it can be observed that many people who are classified as long-term unemployed in Germany are considered as inactive in other countries. This leads to a distortion of cross-national long-term unemployment rates. People who are out of gainful employment for a long period of time usually possess similar risk-characteristics – regardless of whether they are classified as “long-term unemployed”, “early retirees” or “unable to work”. These risk-characteristics include a lack of or low qualifications, linguistic barriers, health restrictions or older age. The prevalent classification of a particular employment status depends on national social security systems – also in the harmonised international classification. People with similar employment problems fall under different social protection systems depending on the country, and thus show up statistically in different employment statuses. A comprehensive comparison should take these interrelations into account. That’s why the long-term unemployment rate is only partially suitable as a cross-country comparative indicator.

In order to capture the full extent of long-term non-employment in one country, it makes sense to combine the three types named above – the long-term unemployed, (long-term) disabled persons including the long-term sick, and early-retirees. This reveals that the extent and structure of this combined group of non-employed working age people varies considerably from country to country, as the comparison of Germany with Sweden, the Netherlands, Austria, Great Britain and Denmark shows (see Figure 2). 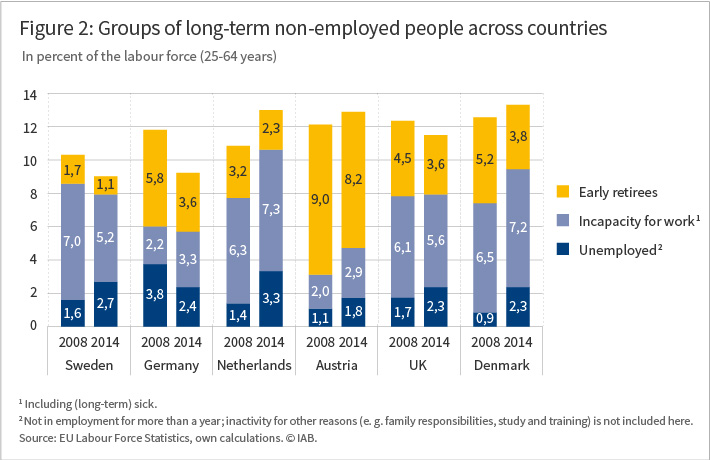 The only country with a lower share of long-term non-employed working age people compared to Germany is Sweden with 9 percent – in Germany, the proportion dropped from nearly twelve percent in 2008 to 9.3 percent in 2014. In particular, the proportion of people in Germany with an incapacity for work is below average compared to other countries. In Austria, the share of early retirees – often invalidity pensioners – is at a European peak with over eight percent. If substitution effects between the long-term unemployed and other long-term inactive welfare recipients are not taken into account, it can lead to erroneous conclusions.

There is a further reason why the internationally harmonised long-term unemployment rate is only partially suitable as a comparative indicator: it inadequately captures the extent of long-term exclusion from market-based, regular employment. This particularly relates to the significant differences from country to country regarding the scope of publicly subsidised employment programmes, since the subsidized employed are usually classified as being occupied but have very limited chances of getting a job in the regular labour market. Whilst for example 2.2 percent of the labour force in Denmark is in permanently subsidized employment, the proportion in Germany is only 0.4 percent – and these are usually only the so-called One-Euro Jobs.

Regina Konle-Seidl is a senior research fellow at the IAB.