Within the European Network of Public Employment Services (PES), the Institute for Employment Research (IAB) initiated an international project to construct leading indicators for the labour market by drawing on the expertise of the public employment services in numerous European countries. This initiative resulted in the new “European Labour Market Barometer” – analogous to the well-established IAB Labour Market Barometer for Germany. It reflects the expected short-term development of unemployment and employment in the European labour market.

Compared to the previous month, the European Labour Market Barometer increased by 0.8 points (cf. figure 2). After the labour market indicator plummeted by 6.9 to 93.5 points in April, a considerable part of the decline has now been offset. However, the prospects are still slightly dampened. The situation in the European labour market is stabilising, but the crisis is not yet over. 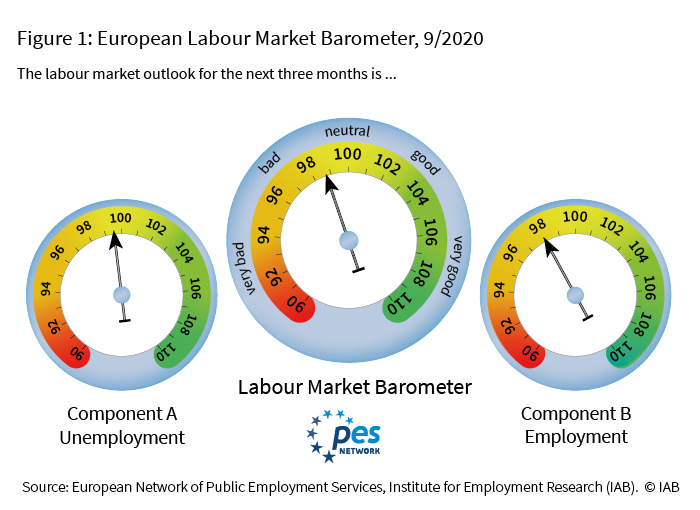 Since the start of the time series in June 2018, the European barometer tends to deteriorate. This development is likely related to the ongoing downturn in global industrial activity. The outlook for the development of employment was continuously more optimistic than for unemployment, which may be due to rising labour force participation, for example. More recently, however, this was no longer the case. According to data from the Labour Force Survey, transitions to inactivity were on a record high in the second quarter 2020. For Germany, Johann Fuchs, Brigitte Weber and Enzo Weber found in a 2020 study that the labour force potential has fallen significantly since the beginning of the corona crisis. This is a consequence of both a slump in migration and the withdrawal from the labour market. While this puts a strain on the employment trend, it could relieve pressure on unemployment. 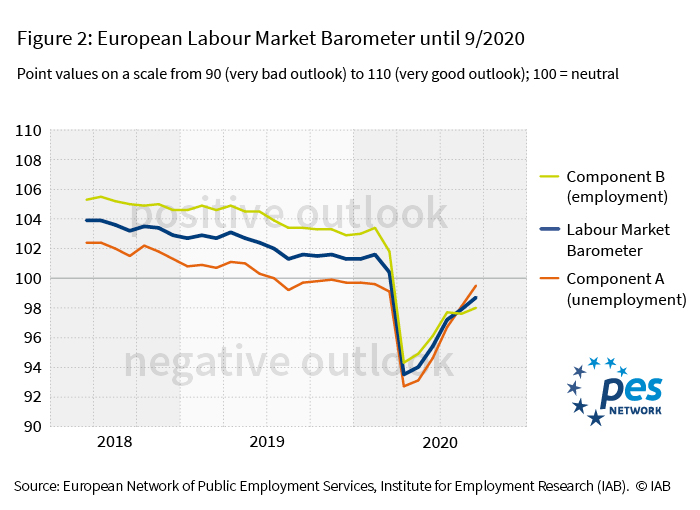 In Germany, the IAB Labour Market Barometer is a well-proven leading indicator for the short-term development of unemployment and employment. As part of a pilot phase, the project for a Europe-wide early labour market indicator began in June 2018. The number of participants has grown since. Current participants include Austria, Belgium (more precisely: Flanders, Wallonia, and German-speaking Community), Bulgaria, Cyprus, Czech Republic, Denmark, Germany, Iceland, Liechtenstein, Lithuania, Luxembourg, Malta, Portugal and Poland (starting November 2020). Further national employment services will join the project. Together the data will paint a reasonably comprehensive picture of the European labour market. In the future, the European Labour Market Barometer will be published monthly.

The barometer is based on a monthly survey among local branches of the employment services in the respective countries. The branches are asked about the expected development of unemployment and employment in their district. The survey is carried out jointly by the respective employment services and the IAB. For the IAB Labour Market Barometer in Germany, it is the Federal Employment Agency who surveys the 156 local employment agencies, as presented in 2013 and 2016 reports by Christian Hutter, Enzo Weber, Katrin Schmidt and Silke Delfs.

As the IAB Labour Market Barometer for Germany already demonstrated according to a 2015 study by Christian Hutter and Enzo Weber, the specific knowledge of the employment agencies has potential for a leading indicator. In addition to overarching macroeconomic and labour market signals, the experts surveyed also have insight into specific structures and important variables at the local level. The respondents can then decide for themselves what importance they attach to the information for the region-specific labour market development. Local branches of the employment services also maintain direct contact with neighbouring districts, companies and associations on-site. These networks also show potential for early signals of labour market developments.

To exploit this potential, the IAB has initiated a joint project within the European Public Employment Services Network (PES Network, cf. infobox 1) in the course of which monthly surveys are conducted among the public employment services in the above-mentioned participating countries. In the partner countries, national indicators for labour market development, equivalent to the IAB Labour Market Barometer in Germany, originate from these surveys.

How the barometer works

The local branches of the public employment services in each participating country monthly answer the following question for unemployment and employment respectively:

“What is your overall expectation for the development of unemployment (or employment) in your PES district within the next three months – beyond the usual seasonal pattern?”

On this basis, national indicators are constructed by aggregating the local assessments, taking into account the different sizes of the districts. The standardisation to values between 90 and 110 ensures easy interpretation. Values around 100 suggest that unemployment or employment will remain more or less constant within the next three months. Values well below 100 indicate a negative assessment, while values well above 100 signal a favourable trend. The overall barometer is illustrated by the mean value of the sub-indicators for unemployment (component A) and employment (component B).

The national indicators are then merged into a common indicator, the European Labour Market Barometer. For this purpose, the national sub-indicators for unemployment and employment are weighted by population and then averaged.

Although the available time series of the European indicator is still relatively short, a first analysis of its predictive power for the labour market can already be implemented. Here we focus on the component for unemployment, as there is less data on employment available on a monthly basis and for a timely evaluation.

We examine the change in seasonally adjusted unemployment in the three months following a barometer score. The analysis includes the period from the barometer’s start in June 2018 to August 2020. A negative correlation should emerge: the higher the barometer value, the greater the subsequent decline in unemployment. 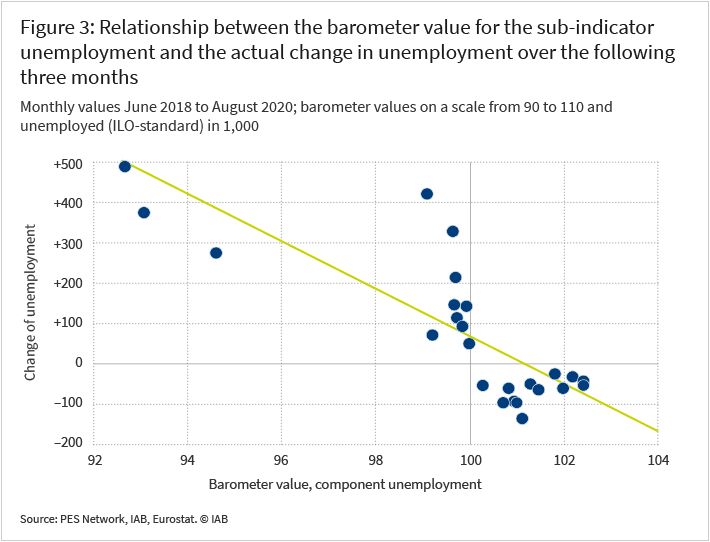 Figure 3 shows the monthly values of the unemployment sub-indicator of the European Labour Market Barometer on the horizontal axis and the change in unemployment over the following three months on the vertical axis. As a proxy, we use the sum of the seasonally adjusted unemployment figures (following the ILO standard) in the participating countries. The regression line shows a clear negative correlation. Indicator values greater than 100 are always followed by a decrease in unemployment (lower right quadrant) and indicator values less than 100 by an increase in unemployment (upper left quadrant). The correlation is very strong with a value of -0.81. Although the survey question should exclude typical seasonal developments, a certain seasonal pattern often persists with survey indicators. Therefore, a common seasonal adjustment method will be applied as soon as the time series of the barometer is long enough. In doing so, especially the two points in the top centre for February and March 2020 will likely shift to the left towards the regression line, as the positive expectation effect of the impending spring would be corrected.

To a certain extent, the strong correlation is also due to the large fluctuations from the corona period. If one restricts the sample period up to the end of 2019, the points above +200 in Figure 3 are omitted. The slope of the regression line would change only slightly, however. There is therefore no fundamental structural break in the predictive ability. Because the variation in the data decreases, the correlation measure would be somewhat lower in absolute terms. However, with a value of -0.67, still a high correlation would result.

The IAB Labour Market Barometer has proven itself as a leading indicator for the German labour market. It utilises the competency of the local employment agencies to assess labour market developments in the form of a survey.

This works in Europe as well: Within the European Network of Public Employment Services, the IAB has initiated a joint project in the course of which the local branches of the public employment services of numerous European countries are surveyed following the example of the IAB Labour Market Barometer.

The European Labour Market Barometer currently stands at 98.7 points. After the deep plunge of the labour market indicator in April, a considerable part of the decline in the indicator has now been regained. The situation on the European labour market is stabilising, but the crisis is not yet over. Parts of the economy, such as the automotive industry and retail, are undergoing difficult transformation processes, and the rising infection rates pose a substantial risk.

When further data become available, the methodological work on the European Labour Market Barometer will continue and the sub-indicator on employment can be evaluated. In addition, a seasonal adjustment could further improve the predictive power once the time series is sufficiently long.

In the future, the European Labour Market Barometer will be published monthly by the IAB, the PES Network and the national employment services.

The European Network of Public Employment Services (PES Network) was established in 2014 following a decision of the European Parliament and Council. An informal advisory group consisting of the heads of the national employment services dates back to 1997.

The network encompasses all EU countries, Norway, Iceland and the European Commission. Its main functions are mutual learning through benchmarking, exchange of ideas, input for European strategies, implementation of initiatives and formal consultations with EU institutions.

Further information is available at: www.pesnetwork.eu

The time series data of the European Labour Market Barometer including its components for the individual employment services can be found here.

Dr Christian Hutter is senior reasearcher in the Department "Forecasts and Macroeconomic Analyses" at the IAB.