A good 70 percent of refugees in Germany come from eight non-European asylum seekers’ countries of origin. Their integration into the German labour market has increasingly gained momentum in recent years. Hence, the employment rate of people from these countries who have moved to Germany since the end of 2014 increased by almost 9 percentage points in the first six months of 2017 and by a good 12 percentage points to 28 percent in the first six months of 2018.

If you want to analyse the labour market integration of refugees on the basis of the employment statistics of the Federal Employment Agency (Bundesagentur für Arbeit, BA), you will have to base this on several assumptions. This is due to the fact that the residence status of foreigners is not recorded by the employment notifications of enterprises. This is also why people who immigrated to Germany as refugees cannot be identified directly in the employment statistics. Moreover, most companies do not have any information regarding when and with which residence status a foreigner came to Germany. This is due to well-founded reasons of data protection law.

However, the BA’s employment statistics include information on nationality. Reporting on labour market integration therefore uses the concept of employees from the eight most important non-European asylum seekers’ countries of origin. These are Afghanistan, Eritrea, Iraq, Iran, Nigeria, Pakistan, Somalia and Syria. In July 2018, 72 percent of people of working age (15 to 64 years) who had come to Germany as refugees came from this group of countries. 70 percent of the nationals from these countries had also a residence status indicating a refugee background (asylum seekers, residence permit for political, international law and humanitarian reasons, displacement protection, toleration). Additionally, there are persons who came to Germany as refugees but have a different residence status now. In this respect, the population from this group of countries is for the most part composed of refugees, although not exclusively. Their employment development is therefore a good indicator of the overall labour market integration of refugees. In recent years, the number of people coming from these eight states has increased significantly: At the end of 2014, there were still approximately 360,000 people of working age, in mid-2018, these were already over 1.1 million. This represents an increase of 760,000 persons (regardless of residence status). This increase is presumably almost entirely due to the influx of refugees.

Also the number of employees from the eight most important non-European asylum seekers’ countries of origin increased significantly in the same period: At the end of 2014, a good 96,000 people from these countries were in dependent employment, in mid-2018, these were 311,000. This represents an increase of 215,000 people. If you correlate this increase with the increase of the working-age population coming from these states, this results in a value of 28.3 percent. This value is a good indicator of the proportion of people from this group of countries who have moved to Germany since the end of 2014 and are now in dependent employment. For comparison: In December 2015, this share still amounted to 7.6 percent (see figure). 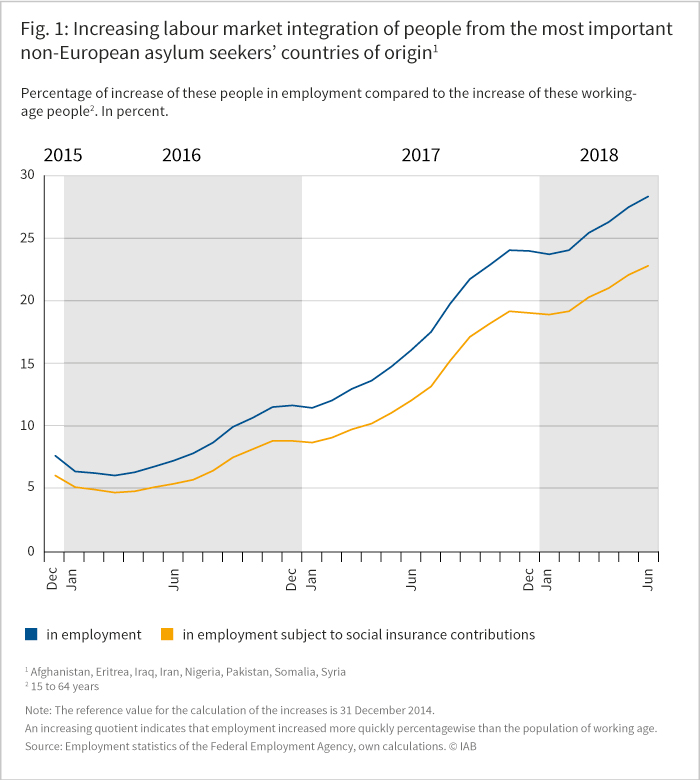 During the same period, the increase in employees subject to social insurance contributions amounted to 173,000 people. This corresponds to a share of 22.7 percent of the growth of the working-age population since December 2014. For comparison: In December 2015, this value was still at 6 percent.

Overall, the growth in employment can be assumed to be to a great extent due to the fact that most of the refugees have finished their asylum procedures and are now entering the labour market after having completed integration courses and other measures. If this trend continues, it will be likely that the relation of employment and population growth will increase to 33 to 36 percent until the end of 2018.