Refugees are increasingly succeeding in integrating into the German labour market. However, according to an analysis based on the IAB-BAMF-SOEP Survey of Refugees, women benefit significantly less than men from these advances.

Female refugees are a particularly vulnerable group and in need of support. The specific challenges faced by immigrants, refugees, and women all apply to them; correspondingly, studies such as that by Thomas Liebig and Kristian Rose Tronstad from 2018 speak of a triple disadvantage. Based on the longitudinal data of the IAB-BAMF-SOEP Survey of Refugees in the period from 2016 to 2019 (see infobox), this article examines how the labour market integration of female and male refugees has evolved since their arrival in Germany and how observed gender differences can be explained.

The development of labour market integration of female and male refugees

Although employment increases with the length of stay for all refugees, the increase is more pronounced for men than for women (s. Figure 1). For newcomers, the difference between female and male employment rates is 7 percentage points (2 % versus 9 %) but rises to 38 percentage points after four years of residence (13 % versus 51 %). The gap narrows for lengths of stay of five years or more, but women’s employment rate is still just under half that of men (27 % versus 61 %). 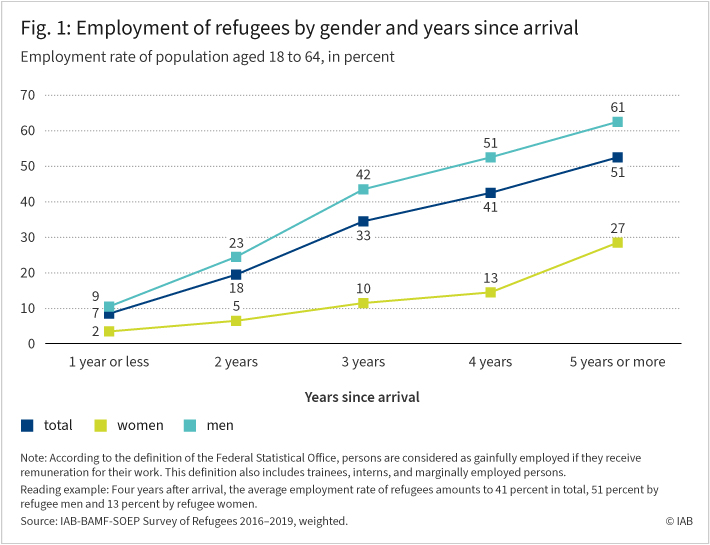 There are various explanations for the lower labour force participation of women on the one hand, and immigrants on the other. These can be used to explain the gender gap among refugees in Germany.

Following a 2013 study by Christian Dustmann, Tommaso Frattini, and Ian P. Preston, pronounced differences in educational and vocational systems between the countries of origin and destination, as well as the sudden and unprepared change from one country to another, often leads to a (partial) devaluation of the qualifications and skills acquired in the country of origin. Moreover, immigrants and particularly refugees often lack material resources or networks that can facilitate their start in the destination country.

In addition, the type of qualifications acquired in the country of origin plays an important role for gender differences. In their country of origin, women were more likely to be employed in occupations that require country-specific knowledge and skills (as in the education and health care sector); access to these occupations is heavily regulated in Germany, meaning that for those women higher investments are required to enter the workforce. These higher costs can discourage women from participating in the labour market.

Furthermore, gender differences are also apparent in the improvement of job opportunities through (further) education and training and recognition of qualifications in the destination country. Among other things, male refugees attend language or integration courses more often than women and on average complete them earlier, according to a 2021 study by Wenke Niehues, Nina Rother, and Manuel Siegert. Correspondingly, male refugees acquire host-country specific skills and knowledge that improves male chances for a gainful employment, while female refugees increasingly take on care work. Traditional family models may be associated with a lack of or delayed investments in language and training as well as limited availability or complete exclusion from the labour market. Irrespective of the actual division of care work in refugee families, previous studies show that the vast majority of refugee women in Germany would like to take up gainful employment. Moreover, according to a 2020 study by Herbert Brücker et al. and a 2021 study by Stefan Bernhard et al., refugees who have arrived in Germany since 2013 hold similar beliefs about female employment as the German population.

Differences in the availability and usage of social networks can also contribute to gender differences. Following a 2021 study by Wenke Niehues, Nina Rother, and Manuel Siegert, female refugees spend more time in the family context, whereas men spend more time with Germans or people who have been living in Germany for a longer period of time. As a result, women miss out on the opportunity to build a network that could support them, for example, in finding a job or looking after children.

Finally, the traumatic experiences of refugees play an important role in labour market integration. Such experiences can have a negative impact on refugees’ mental and physical health. According to a 2020 study by Maria Metzing, Diana Schacht, and Antonia Scherz, the risk of exposure to traumatic experiences such as gender-specific and sexual violence, is higher for female than for male refugees. Women are additionally burdened by pronounced post-arrival stressors, such as reduced social participation.

To be able to assess the relevance of the aspects outlined, the following section discusses the socio-demographic composition of female and male refugees surveyed in 2019 (see Table). Looking at the education acquired in the country of origin, women are more often found in the lowest educational category (25 % versus 18 % of men), but they equally often hold tertiary qualifications as men (11 %). However, women who were working before arrival in Germany were overrepresented in knowledge-intensive services whose knowledge and skills are more difficult to transfer to another labour market. This is also reflected in the fact that men are not only more likely than women to apply for recognition of foreign qualifications (13 % versus 8 %), but are also more likely to have it recognised (7 % versus 3 %). Although men on average have more often pre-migration work experience than women, the duration of work experience does not differ significantly between the genders.

Regarding education acquired in Germany, 65 percent of refugee men and only 49 percent of women have completed an integration course (or other language courses). On average, women wait three months longer for their first language course than men (16 versus 13 months). Programmes or counselling services offered by the Federal Employment Agency are also used more often by men than by women.

In sum, the socio-demographic composition of the female and male refugees indicates women’s poorer prerequisites for successful labour market integration in many respects.

If we consider the average gender difference in employment probability, men indicate a 34.4 percent employment probability, whereas women only 8.8 percent (see Figure 2). There is thus a gender gap of 25.6 percentage points, which can be attributed to various influencing factors. Almost half of the gender gap can be explained by the observed gender differences in the prerequisites for successful labour market integration (12 percentage points). 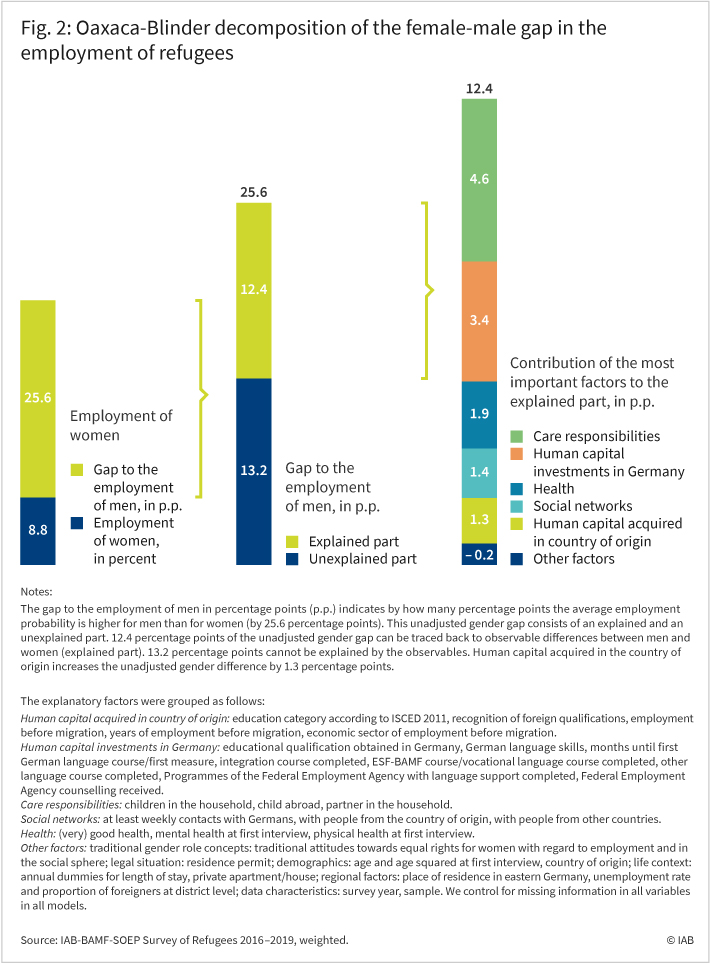 A closer inspection of the explanatory factors – summarised into thematic groups as conceived by a 2021 study by Yuliya Kosyakova et al. – shows that the human capital acquired before arrival in Germany explains around 1.3 percentage points of the gender gap. The economic sector in which refugees worked before arrival plays a prominent role here.

At 3.4 percentage points, another important explanation for the gender gap is the difference in the human capital investments made in Germany, such as language acquisition, education, or the use of employment-counselling services. Women, with their less easily transferrable human capital from the country of origin, might be discouraged by the higher costs of transfer to plan an investment at all.

The largest share of the gender gap in employment is explained by differences in care work (4.6 percentage points), and particularly by the presence of children under the age of three in the household. Since there is no impact of the reported traditional gender role conceptions to be found, the lived gender roles appear to be more decisive for labour market integration.

More than half of the gender difference cannot be explained by the model (53 %) and is likely caused by unobserved factors such as productivity, motivation, or preferences and is also often attributed to (indirect) discrimination. The latter cannot be proven on the basis of the present analysis, but it cannot be ruled out either.

The labour market integration of recently arrived refugees is a major challenge. This relates to language and educational barriers, a lack of social contacts when looking for work, the lack of recognition of educational qualifications and professional experience from the country of origin, as well as legal obstacles and health-related barriers. These hurdles seem to be more pronounced among female than male refugees, which is reflected in females’ comparatively lower employment rates.

In general, the findings suggest that particularly female refugees would benefit from improved recognition and training opportunities for their qualifications in the teaching and health care sectors, while at the same time contributing to tackling the shortage of skilled workers in those sectors in Germany. Moreover, the results speak in favour of supporting refugee women to invest in Germany-specific human capital through access to language and integration courses as well as to employment-counselling services. Refugee women would also benefit from further reforms in the German labour market and family policies (compatibility of work and family, more male domestic care work, early access to comprehensive childcare) and thus build up more social contacts and social participation. Measures such as mentoring programmes, networking, and advisory services via social media can benefit women in particular. The nationwide introduction of the health card for refugees could also help to lessen health risks.

The IAB-BAMF-SOEP Survey of Refugees is an annual household survey of people who have moved to Germany for protection reasons. The sample was drawn from the Central Register of Foreigners (AZR). Using statistical weighting methods, representative statements can be made for asylum seekers and refugees who arrived in Germany from 1 January 2013 to 31 December 2016, and who were registered in the AZR by 1 January 2017, as well as for their household members. The weights used in this report are preliminary. The original data includes 8,321 adults, who were interviewed at least once. For our analyses, we considered refugees who have arrived in Germany since 2013 and who are of working age (18 to 64 years). This resulted in a total of 17,780 person-wave observations of 8,035 people (4,748 men and 3,287 women) over four survey-waves.

If not indicated, we pooled data across four waves to ensure a sufficiently high number of cases for the empirical analyses. Individuals interviewed in multiple years can thus enter the analysis with more than one observation. All descriptive and multivariate analyses are weighted to compensate for biases caused by persons observed more than once and by over-represented groups in the IAB-BAMF-SOEP Survey of Refugees (e.g. persons with positively decided asylum applications, persons with good prospects of staying, women, persons over the age of 30).

Dustmann, Christian; Frattini, Tommaso; Preston, Ian P. (2013): The effect of immigration along the distribution of wages, in: Review of Economic Studies 80, pp. 145–173.

Dr Yuliya Kosyakova is senior researcher in the research department "Migration and International Labour Studies" at the IAB.

Lidwina Gundacker is senior researcher in the research department "Migration and International Labour Studies" at the IAB.

Zerrin Salikutluk is assistant professor at the Departement of Social Sciences at the Humboldt Universität zu Berlin.

Dr Parvati Trübswetter is senior researcher in the department "Migration and International Labour Studies" at the IAB.

Most jobs in essential occupations in Germany have relatively good working conditions. Yet a substantial share of jobs has bad ones, and here migrants are ...read more