The COVID-19 pandemic has affected the world economy in an unprecedented way, with international trade being no exception. Studying trade flows between China and Germany in February 2020 gives a clear picture of what happens when a major shock affects a single trading partner. It helps us learn what to expect from similar future, more geographically limited crisis situations. Studying this particular time window also gives a glimpse into the beginning of a global crisis, which holds the potential to lead to long-lasting changes in the international production networks and division of labour.

In March and April, a large number of countries responded to the spread of the virus by imposing lockdown measures and by closing their borders. This created multiple supply and demand shocks that are difficult to disentangle. By contrast, in February, China’s economy was the first one directly affected by the pandemic. Trade in goods between Germany and China reflected this new reality, and both exports and imports declined in February 2020.

Grouping the goods traded by Germany into end-use categories shows that the largest drop in imports from China was observed for intermediate goods, which are items that are further processed and are an integral part of the global value chain. Imports of intermediate goods from the entire world for the same month were declining at a lower pace, hinting at a more widespread disruption of the global production networks.

International trade has faced a steep decline in the last several months. Germany was no exception, seeing its imports and exports of goods to the world decline in March 2020, the former by 4.4 and the latter by 7.7 percent relative to the same month the year before. In April 2020, exports and imports declined much sharper, the former by more than 31 percent and the latter by more than 21 percent relative to April 2019.

The import and export numbers in March and April declined following the responses of many countries to the pandemic, including Germany itself, imposing lockdowns and thus creating both supply and demand shocks that reduced international trade. On the contrary, the country most affected by the virus in February was China; it was also the first to impose lockdown measures that affected its economy. Looking at how trade between Germany and China changed in February 2020 can present a clearer picture about the importance of this type of disruption in only one partner country and shed light on the beginning of the current global crisis.

In 2019, Germany imported goods in value of EUR 109 billion and exported goods in value of EUR 95 billion to China. This makes China one of Germany’s most important trading partners with 9.9 percent of all imports and 7.2 percent of all exports for the year. Zooming in to February of the current year, imports amounted to EUR 7.4 billion, a year-on-year decline of almost 12 percent. Exports amounted to EUR 6.8 billion, a reduction of almost 9 percent relative to the same month in 2019. This was happening against the backdrop of slightly increasing exports of Germany to the whole world (less than half percent) in February 2020, and a minor (about 2.8 percent) decrease in imports, both measured year-on-year.

Trade developments for goods, broken down by end-use category

The United Nations Statistics Division has developed a classification list of traded goods assigning each good to a category depending on its end use. There are three categories: goods used for final consumption, intermediate goods to be further processed, and capital goods, which are, roughly speaking, the tools used for production. There is a fourth group, which includes all goods that cannot be assigned to a single category but are part of several of the above categories. An example is gasoline, since it can be intended for both final and intermediate consumption.

Figure 1 shows the breakdown by end-use category of German trade with China for the months of February 2019 and 2020. What stands out is the particularly sharp drop of more than 17.2 percent in the imports of intermediate goods. Imports of final consumption goods declined by 12.7 percent, while imports of capital goods went down by 11.8 percent. For comparison, the largest year-on-year monthly drop in imports from China during the financial crisis was in August 2009 and amounted to slightly over 14 percent. 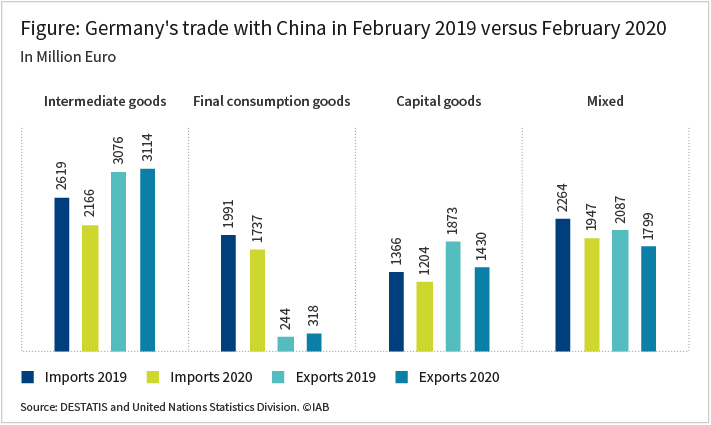 In February 2020, German exports of intermediate goods remained almost unchanged; there was a 30.3 percent increase in the export of consumption goods. The latter group constitutes a small share of German exports to China though. The export of capital goods was lower by 23.6 percent.

Intermediate goods are an important part of the global value chains, since they are used in further production stages. Their availability and prices contribute to the productivity of manufacturing plants as shown in a paper by Mary Amiti and Jozef Konings from 2007. A decrease of more than 17 percent in the import of intermediate goods from China could have negatively affected some German producers by creating bottlenecks, decreasing the available variety of inputs, and thus also increasing input prices. An example is the car producer Volkswagen, which announced short-time work for some of its employees in February due to supply chain bottlenecks. The significance of such occurrences of course depends on the availability of alternative suppliers and on the stock of existing inventories.

Trade between Germany and China in February 2020 was affected by the lockdown measures in China. Lower demand in the largest Asian economy reduced the amount of exports from Germany. Lower production in China is likely to be the main reason for the decreasing German imports, with a particularly sharp drop in the imports of intermediate goods. This was happening against the backdrop of lower imports of intermediate goods from the whole world. Given the central role played by China in the international trade of manufactured goods, such development is potentially indicative of a larger disruption of the global supply chains. Coupled with the even sharper drop in world trade in the subsequent months, the developments have the potential to lead to a re-evaluation and re-structuring of the global production network and division of labour.

Three points of clarification are necessary to understand the data. First, container transport by sea between China and Germany takes several weeks. The lockdown measures in China in February must have therefore affected the trade numbers for February predominantly through goods that are shipped via air cargo. In terms of value, air cargo represented 35 percent of world trade in 2015 according to a report by Ben Shepherd and co-authors from 2016.

The second point to keep in mind is that there have been adjustments to the numbers for imports from China done by the German Statistical Office. The adjustments are reported not at the good level but for groups of goods. As a result of this, the adjusted values cannot be assigned to an end-use category. Additionally, there are good classifications in the data that are not assigned to an end-use category in the Classification by Broad Economic Categories (BEC) Revision 5. This leads to a discrepancy between the aggregate amounts (and percentage changes) reported by the German Statistical Office and the sum of the categories in Figure 1. The same applies to the numbers for the German trade with the world, aggregate versus broken down by end-use category.

Lastly, adjustments to the trade numbers by the German Statistical Office take several rounds and months. While the aggregate trade numbers (the ones not broken down by end use) are complete for February 2019, the numbers for 2020 are still subject to updates. This point does not apply to the exports and imports broken down by end use and reported here, since the adjustment amounts are not assigned to an end-use category.

The World Bank, Manufacturing, Value Added (Current US$), available at: https://data.worldbank.org/indicator/NV.IND.MANF.CD, accessed on 03.07.2020

Stepanok, Ignat (2020): Germany’s trade with China at the beginning of the global COVID-19 pandemic, In: IAB-Forum 2nd of October 2020, https://www.iab-forum.de/en/germanys-trade-with-china-at-the-beginning-of-the-global-covid-19-pandemic/, Retrieved: 5th of July 2022