German Exports to the UK: declining since the Brexit referendum in 2016

The rules defining trade between Germany and the United Kingdom (UK) have not changed despite Brexit. Nevertheless, there is a clear downward trend in German exports of goods to the UK since the referendum in June 2016. The strongest reductions are visible in the motor vehicle and pharmaceutical industries. In contrast, German exports to its other main export destinations and to the world as a whole have been on the rise for the same period up until the COVID-19 pandemic.

At the end of January 2020 the UK exited from the European Union. The trade relationship is expected to remain unchanged during a transitional period lasting until the end of 2020. After that, an exit of the UK from the European single market and customs union is probable and would lead to higher trade costs for both sides.

This would bring consequences for German exporters. In 2018, the UK was the fifth most important export partner of the German economy. It is estimated that roughly 460 000 jobs in Germany are directly and indirectly connected to exports to the UK as study by Sekou Keita, Ignat Stepanok and Ehsan Vallizadeh from 2020 shows. It is therefore important to follow the development of trade flows between the two economies.

Since the UK referendum in June 2016, there have been no changes in the rules shaping trade between the EU and the UK. Despite this, the value of German exports to the UK is on a downward trend since then (see Figure 1). This can be seen as a sign of the rising uncertainty for exporters. A sizeable portion of international trade is organized in global value chains. Rising uncertainty can motivate internationally active firms to restructure their networks well in advance before new rules are implemented. In a study from 2019, Nicholas Bloom and co-authors show that a higher level of uncertainty in the UK has already left a mark on investment decisions of firms there.

The British pound has depreciated considerably vis-à-vis the Euro

The depreciating pound sterling can be another reason for the falling German exports. Its value decreased considerably and rapidly against the Euro after the referendum and has remained at a relatively lower level since. This makes German products more expensive on the UK market and can reduce demand for them, especially if local production is an available substitute. 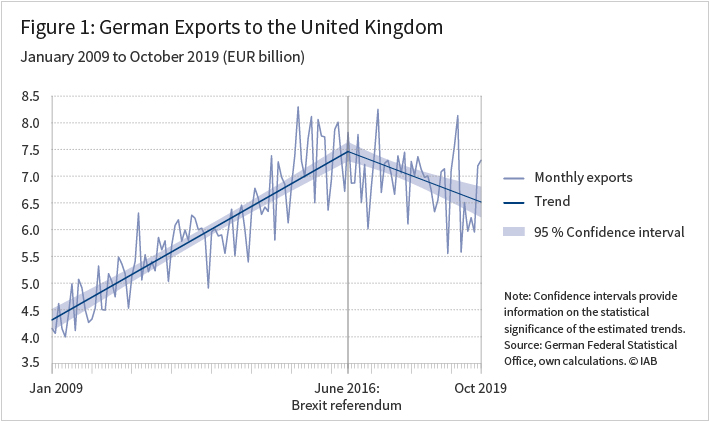 Total German exports to the world have increased considerably after 2016

However, total German exports to the world have been on the rise since 2016. The trend is visible in Figure 2 despite the fair amount of volatility of monthly data. A closer look at exports to the largest trading partners of Germany (USA, France, China and the Netherlands) reveals a similar picture, a rise in exports both before and after the time of the referendum in the UK. Declining exports to the UK after 2016 have been compensated by rising exports to the rest of the world. After the onset of the coronavirus pandemic the expectation is of a change in trend and declining exports also to other countries. 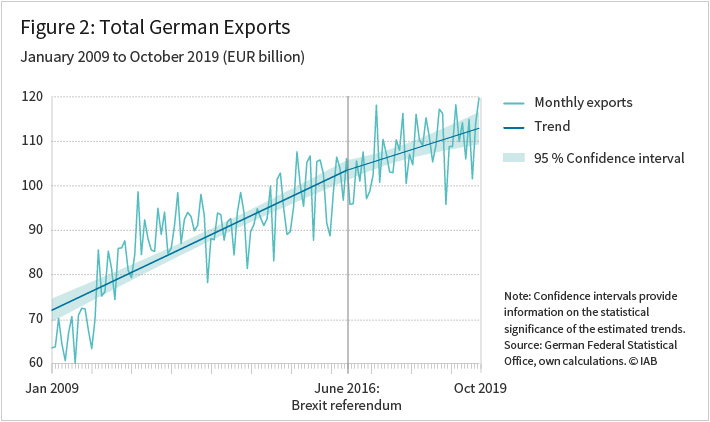 The development of exports differs across sectors 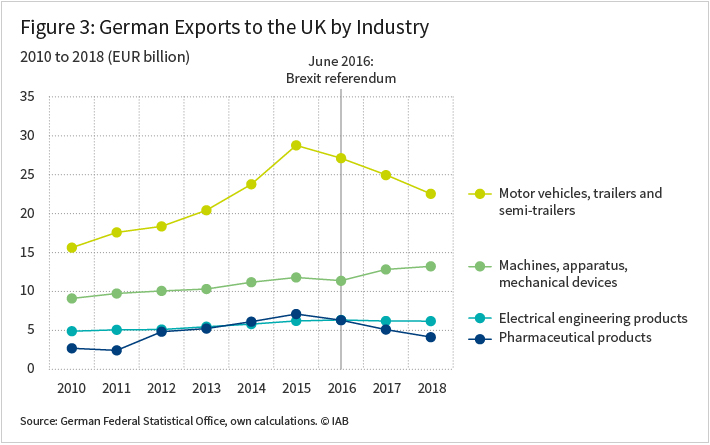 While exchange rate effects have very likely played a role in shaping German exports to the UK, uncertainty about the future trade relationship may also explain a part of the decreasing trend after 2016. International trade is organized in global value chains, where many intermediate parts are sourced from producers in different countries and later assembled in a final plant. This organization of trade depends heavily on predictable and stable rules for international trade.

The Brexit referendum has caused so far a lot of uncertainty, not only about what the new trade rules will look like, but also about the timing of their implementation. It is very likely that global value chains are being reshaped as a result of this uncertainty. More research is needed in order to explain the trends. Despite the higher uncertainty around future trade with the UK, total German exports to the world have been on the rise since 2016 up until the COVID-19 pandemic.

Dr. Sekou Keita is a research associate in the research department "Migration and International Labour Studies" at the IAB.