Forms of employment in European comparison

Germany does not stand alone in having experienced changes in the landscape of work. However, these changes differ in comparison to other countries – both in relation to the relative importance of different forms of employment, and in terms of their development over time.

A monocausal explanation is insufficient to explain these differences: indeed, many factors have played a role. Yet there are indications that institutional frameworks, such as labour-, tax- and social law, or the provision of childcare, influence the distribution of certain forms of employment. In addition, there exist different historic-cultural hallmarks from country to country that are not expressed in statistical  indicators. These are combined with general trends within countries, such as an increase in female employment and the growth of the service sector, as well as specific developments in national labour markets, for example, as a result of the financial and debt crisis.

This European comparison covers countries which, from an institutional perspective, represent a range of welfare state regimes: in addition to Germany, the Netherlands and France represent the “continental European” countries; Italy and Spain Southern Europe; Denmark a Scandinavian welfare state; Great Britain an Anglo-Saxon country with a rather deregulated labour market; and Poland the largest transition country. The comparison is limited to part-time work and temporary employment; agency or contract work is excluded here due to unsatisfactory data in some countries. The period of analysis is from 2002 to 2016.

Part-time work as a share of total employment has indeed increased across the EU countries considered here in the last two decades, which is mostly due to the increase in female employment. Nevertheless, roughly 80 percent of all employees continue to work full-time in their main occupation (see Figure 1). The share of full-time employees is above average in southern Europe, where the labour-market participation of women is still relatively low. Poland and other Eastern European countries also have low rates of part-time work, because in these countries women predominantly work full-time, for political-historical reasons. 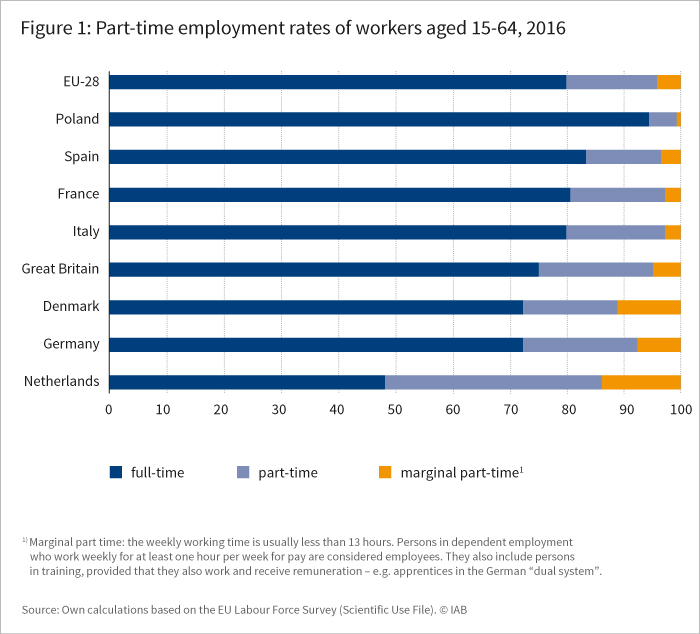 At the other end of the spectrum are the Netherlands, with a part-time share of almost 50 percent (over 75 percent amongst women). Germany, meanwhile, also has a high part-time quota amongst the comparison countries, possibly due to the persistently insufficient availability of childcare. Indeed the rate is also high in Denmark – despite its well developed infrastructure of child care.

Amongst these last three countries, part-time jobs with a low number of hours are also widespread as the main occupation. In Figure 1, a demarcation of less than 13 hours’ regular weekly working time was selected. In Germany, marginal part-time work is favoured by the tax system, which explains the relatively high proportion of these jobs (7.4 percent). Nevertheless, the shares in Denmark and the Netherlands, where such incentives do not exist, are even higher.

Temporary employment is highest in Spain and Poland

About 14 percent of all employment relationships EU-wide were fixed term in 2016 (see Figure 2). Germany is close to the average. It should however be noted that young people with (temporary) training contracts in the German dual system are counted as employees, and thus included in the fixed-rate quota represented here. 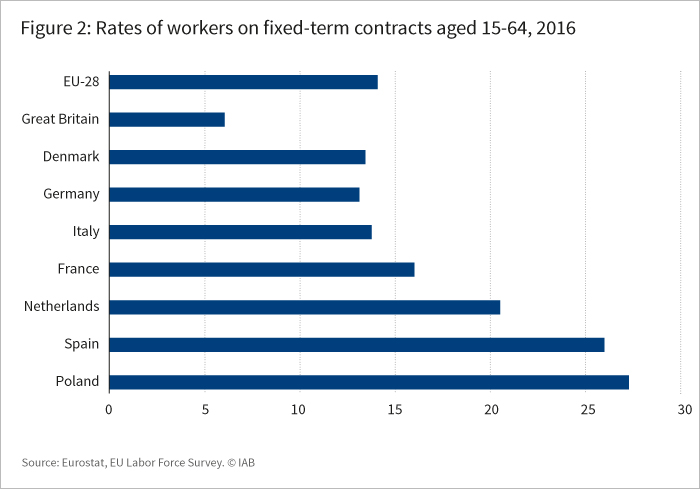 Across all countries, young people and young adults are particularly likely to hold temporary contracts. Country differences can mainly be attributed to institutional differences, especially with regard to dismissal protection. Thus, indefinite contracts in the UK can be relatively easily terminated, such that employers’ motives for using fixed-term contracts (e.g. trialling new employees) do not play an important role. Conversely, in Spain, with traditionally very high protections for permanent employees, fixed-term contracts are widespread, albeit with a declining tendency over the last years. Poland is now the country with the highest rate of fixed-term contracts EU-wide, because temporary contracts enable the circumvention of certain employment regulations and social security contributions.

The international comparison also provides an insight into the question of whether there is a general trend away from “standard work”. Here, employees are defined as being in “standard” employment when they are working full-time or nearly full-time (> 30 hours) and hold a permanent contract. However, due to differing legal and other influencing factors, what counts as “standard” is different for each country. Thus, those who enjoy a “standard work relationship” in Great Britain or Denmark by no means hold the same protection against dismissal as in Germany. In addition, self-employment counts more as the norm in some countries than in Germany, for example due to the major role of agriculture in southern Europe. 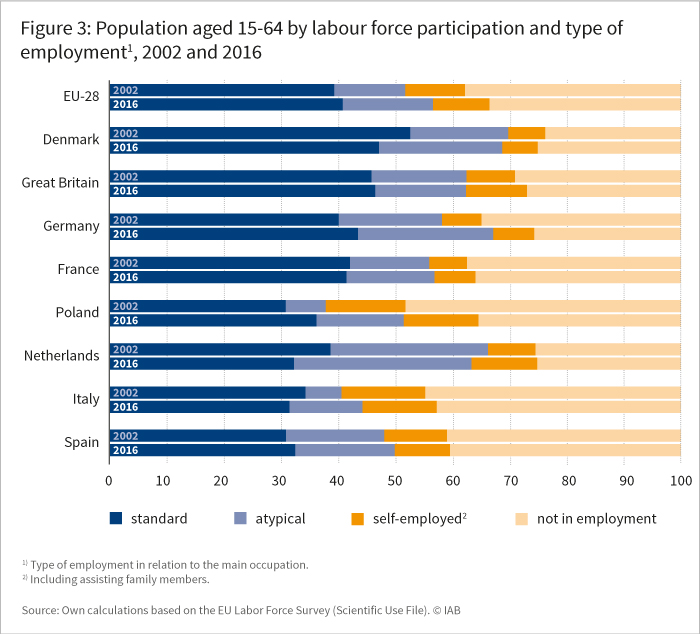 Figure 3 shows the prevalence of “standard” employment (relative to the total population aged 15-64). It can be seen that overall there is no decline in the importance of the standard employment relationship. Its share is still close to 40 percent of the working-age population in the EU-28. Although there has been an overall increase in “atypical” (dependent) employment from 12.5 to 15.8 percent in the EU since 2002, this increase has apparently not been at the expense of standard work, but rather at the expense of inactivity (unemployed plus inactive). A similar development can also be identified for Germany, where standard work as a share of the labour force has even increased by 3.3 percentage points between 2002 and 2016. The highest proportions of formal work are most recently to be found in Denmark and Great Britain. By contrast, the proportion of standard work in the Netherlands is low, mainly because of the prevalence of part-time employment (within what is nevertheless a high level of total employment); and in Italy and Spain, partly because of relatively widespread self-employment, and partly because of high inactivity – which in Spain has been further aggravated by the financial crisis.

This country comparison has shown that standard work as measured against the overall labour force has not declined since the beginning of the last decade. It appears that the growth in “non-standard” employment has opened up access to the labour market for more people. However, further aspects such as the quality of employment remain unexamined – for example with regard to remuneration and employment security. What also remains open is the extent to which atypical forms of employment facilitate a transition to permanent full-time employment in these countries.

Professor Ulrich Walwei is Vice Director of the IAB.