Family-friendly organizational arrangements – anything but “a fuss” (over nothing)!

In Germany, more and more companies are offering measures to improve the reconciliation of family and work. This carries benefits for companies and employees alike, because family-friendly measures help women to return to their previous employer faster and more frequently.

A former German Federal Chancellor still considered women’s and family policies to be just a “fuss”. Cultural attitudes have, however, changed fundamentally: today women make up about half of the German workforce and are indispensable to the German economy. However, women still carry out a larger part of household and family work than men – especially after the birth of a child. That is why the balancing-act between family and work is generally much more difficult for them. This also has disadvantages for employers. Companies are therefore increasingly interested in supporting their employees in reconciling family and work.

Employees who receive support from their company with a view to reconciling family and work are happier and more motivated at work. The advantage for employers: It is easier for them to keep their top performers in the company, as a study by Marcus M. Butts, Wendy J. Casper and Tae S. Yang from 2013 shows.

The proportion of companies offering childcare facilities has quadrupled since 2002

In order to improve the compatibility of family and work, an increasing number of companies are opting for family-friendly offers. Based on the family-friendliness monitor (only available in German), these include in particular the following measures:

The proportion of companies that claim to offer at least one of these measures has increased considerably across all company sizes since 2002 (a detailed analysis can be found in the IAB-Kurzbericht 18/2018).

The largest increase can be observed in childcare facilities at the workplace. While only two percent of German companies had such offers in 2002, this share was almost eight percent in 2016. Opportunities for employees on parental leave have also increased considerably and can now be accessed in almost ten percent of companies. Measures to support women and long-term accounts for parental leave, however, continue to play a subordinate role (see Figure 1). 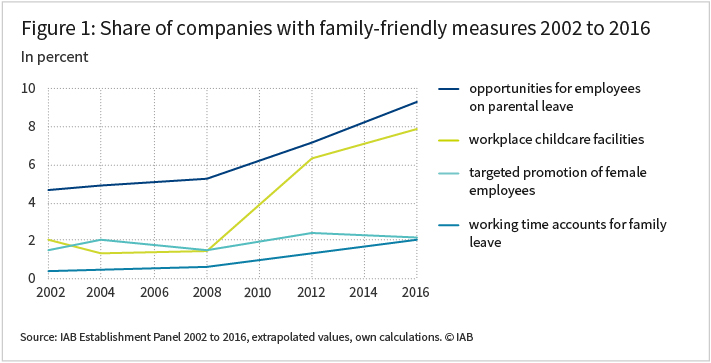 The public sector is the forerunner

The civil service is relatively family-friendly, for example in comparison to the manufacturing or retail sectors – possibly also because it is under greater pressure to legitimise itself than the private sector, or because there is more pressure for it to improve its attractiveness as an employer.

Family-friendly measures benefit companies and employees alike, because they help women to return to their former employer faster after the birth of their first child. The proportion of mothers who return to their old company after the statutory period of parental leave increases significantly faster in family-friendly companies which offer at least one of the above-mentioned measures. Three years after the birth of the child, on average around 80 percent of mothers are working there again – over 10 percentage points more than in companies without family-friendly measures (see Figure 2). 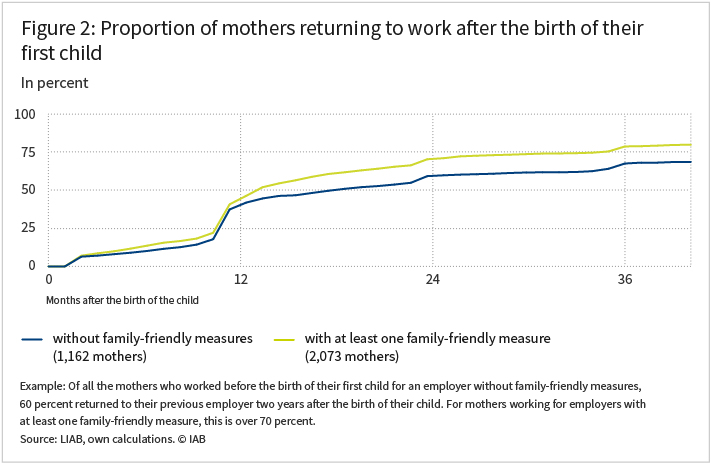 Companies benefit from this because shorter breaks in employment reduce the loss of human capital, since professional qualifications tend to lose value the longer the employment is interrupted. Companies’ investments in the mother’s human capital are thus preserved and continue to pay off.

In addition, the early return of mothers to work reduces the career disadvantages which result from family-related career breaks. A study by Silke Aisenbrey, Marie Evertsson and Daniela Grunow in 2009 showed that such career breaks are often associated with poorer promotion prospects.

If a company offers family-friendly measures, the mothers not only return to their employer on average more quickly, but also more frequently to the same employer (see Figure 3). This is also beneficial because in addition to the length of the career break, potential job changes after the birth of a child also affect the career opportunities of mothers. This is confirmed by a 2004 study by Andrea Ziefle. According to this, mothers who return to their previous employer after a family-related career break experience less marked wage reductions than those who change employers. 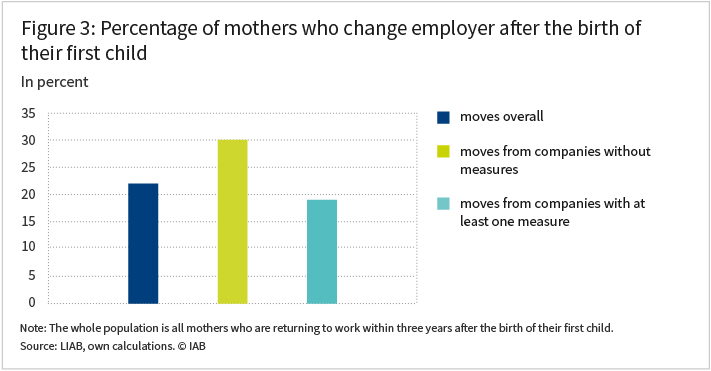 More than a fifth of mothers change employers

However, not all mothers continue their employment with their previous employer after the birth of a child. This also applies if they return to the labour market within the legally guaranteed period of protection against dismissal. Of all mothers who return to work within three years after the birth of their child, 78 percent return to their previous employer, while 22 percent change employers.

In summary, the results presented suggest that investments in family-friendly measures pay off for both mothers and companies. Due to the shorter interruption periods and the lower tendency to change employers, mothers can better resume and continue their previous career without losing any firm-specific knowledge and capital. At the same time, employers’ investments in mother’s human capital are retained within the company and can be utilised again more quickly.

Given the advantages that family-friendly measures entail for working parents and companies alike, the question arises as to why still only a minority of companies offer family-friendly measures. It would therefore be advisable to provide employers with more comprehensive information about the opportunities and requirements of measures to promote compatibility. Works councils, staff councils and the public sector could provide targeted information here. Companies that already offer family-friendly measures could also pass on their know-how. Company personnel policies must also deal with new challenges in relation to compatibility: On the one hand, increasing numbers of fathers are taking parental leave. On the other hand, the individual demands of employees regarding the compatibility of work and family are increasing. In view of increasing shortages within the labour market, companies are well advised to align their personnel policies more closely to these needs.

This article is a result of the research project “FAMILY FRIENDLY Firms & Careers” funded by the German Research Foundation.  It was a cooperation between the IAB and the Goethe University Frankfurt.

The data basis of the study is the Linked Employer Employee Data of the IAB (LIAB), which consists of operational data from the IAB Establishment Panel and individual data from the process data of the Federal Employment Agency (integrated employment biographies).

The IAB Establishment Panel is a survey of around 16,000 companies (Betriebe) that has been carried out annually since 1993. The population is made up of all companies with at least one employee who is subject to social security contributions. The waves 2002, 2004, 2008, 2012 and 2016 are relevant for the analysis presented, since information on the family-friendly measures considered was collected in these years.

The integrated employment biographies (IEB) were used for analysis on the employment side. These make it possible to examine job trends – consisting of periods of employment, benefit receipt, or looking for work – on a daily basis.

Dr Ann-Christin Bächmann is senior researcher at the Research Data Centre of the German Federal Employment Agency at the Institute for Employment Research.

Dr Corinna Frodermann is senior researcher in the department "Panel Study Labour Market and Social Security" at the IAB and at the Research Data Centre of the Federal Employment Agency at the Institute for Employment Research.

Daniela Grunow is Professor of Sociology at the Faculty of Social Science of the Goethe University in Frankfurt.

Marina Hagen is senior researcher at the Institute of Sociology at the Goethe University in Frankfurt.

Dana Müller is head of the Research Data Centre (FDZ) of the Federal Employment Agency (BA) at the Institute for Employment Research (IAB).