European youth unemployment in the aftermath of the Great Recession

A range of scientific studies indicate that long periods of unemployment during the critical transition from school to work can have particularly negative impacts on long-term career trajectories: including on labour-force participation, the quality of employment, and on income. Accordingly, high rates of youth unemployment in Europe are given high political priority, as well as being a key focus of public debate. 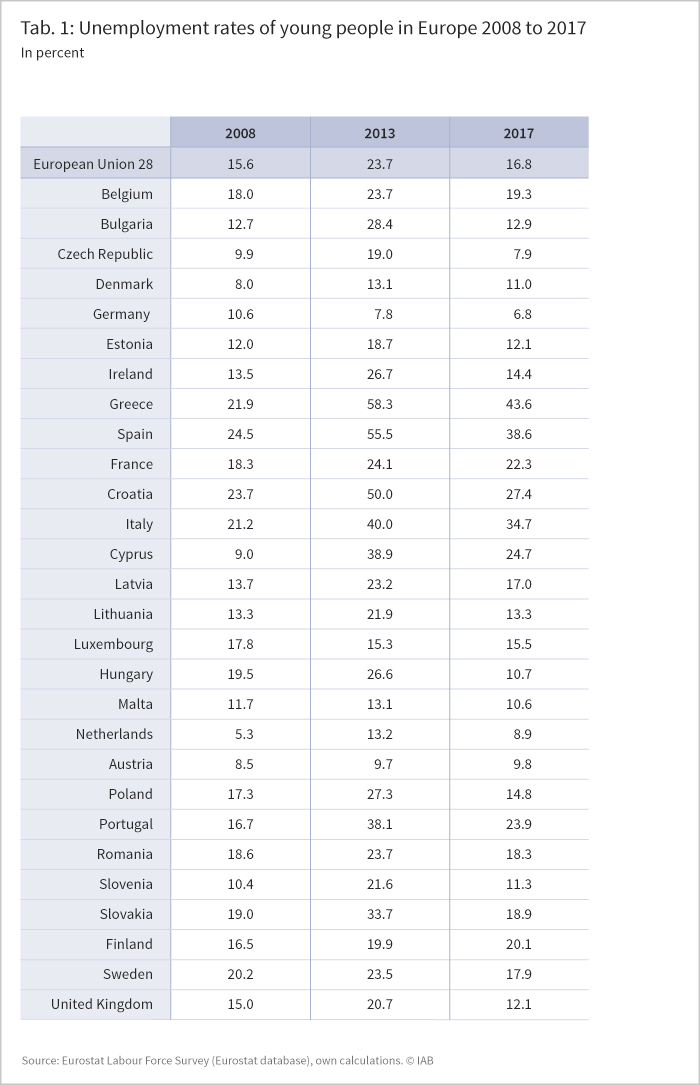 How to measure youth unemployment

However, it should be noted that using the unemployment rate as an indicator tends to overestimate the phenomenon of youth unemployment. Young people who, for example, are at school, studying or who are unavailable to the labour market for other reasons are not taken into account under this metric. The denominator, consisting of unemployed and gainfully employed people, is thus systematically smaller than in other age groups, and even the presence of relatively few unemployed young people in the denominator can make the rate seem very high. Especially comparisons of youth unemployment rates between countries suffer from these effects, as the share of inactive young people, mainly participating at education or training substantially varies across European countries. Thus, comparisons of young people’s social situation across different countries should favour the proportion of unemployed young people as a share of the total population within the given age range, as shown by Hans Dietrich in his 2015 study. The values for this indicator come out as significantly smaller compared to the youth unemployment rate (see Table 2). The population share of unemployed young people in the EU was therefore at 6.9 percent at the start of the recession in 2008; rising to 9.9 percent in 2013; and then, in the wake of the recovery, dropping to 7 percent in 2017. Again, the recovery differs across European countries. Whilst in the majority of countries the population share in 2017 is close to that of 2008 or even below, in some other counties the level is still higher, like France, Austria or Finland. Regarding the countries most affected by the great recession, Ireland and Spain have recovered quite well whilst Italy, Greece and Portugal are still significantly above the 2008 threshold (see Table 2). 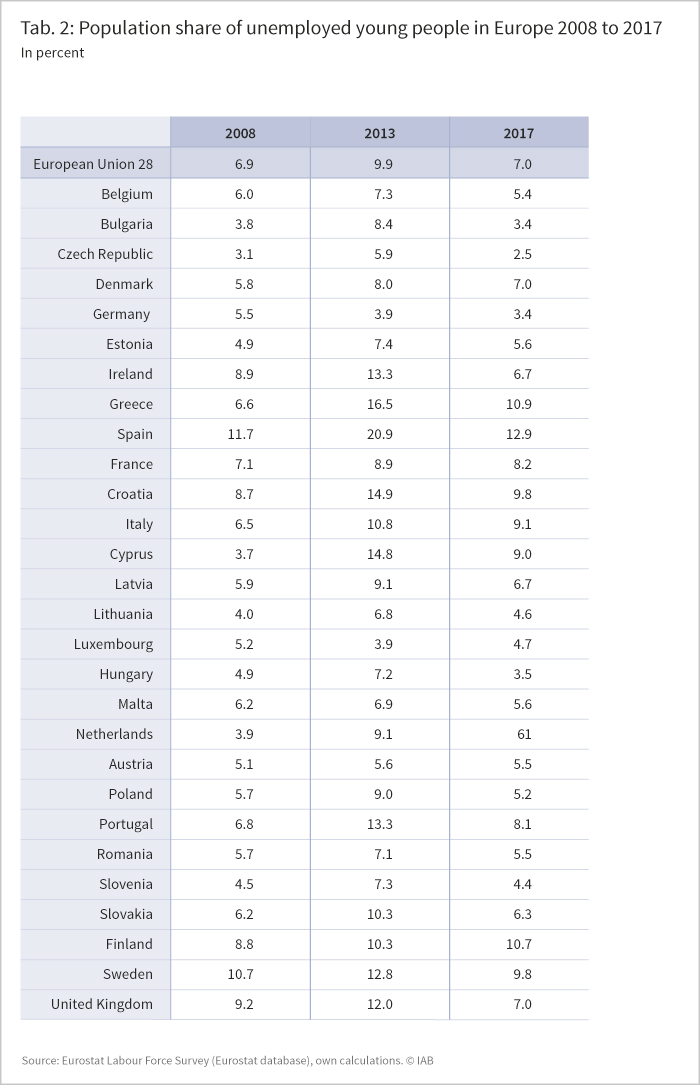 Unemployment among young people compared to the elder age group

Compared to adults aged 25 to 64, the risk of unemployment amongst young people (15-24 years) is significantly higher. Contributing factors include the particular circumstances surrounding the transition from school/ education into the labour market. Job-search periods after graduation, lack of work experience, insecure contracts (fixed-term contracts or marginal contracts when first starting work) all increase the risk of temporary and possibly repeated unemployment in this phase of an individual’s career trajectory as shown by Hans Dietrich’s and Joachim Möller’s 2015 study. In addition, country-specific factors should be considered. These include demographic factors (birth rate, mortality and migration) and in particular the strength of the economy, which, alongside an individual’s own characteristics have a considerable influence on a person’s risk of becoming unemployed as the analysis in 2015 by Hans Dietrich and Joachim Möller shows.

For example, Eurostat reports an adult unemployment rate of 8.4 percent for 2015, compared to 20.4 percent for young people. This corresponds to a ratio of 1:2.4. In this regard, Germany has occupied a rather exceptional position: until the beginning of the 2000s, the ratio was almost 1:1. Since then, the German ratio has been tending towards the European level, although a clear discrepancy still exists. This relative deterioration in the labour-market position of young people in Germany went largely unnoticed because youth unemployment had been declining for years and was very low in international comparison. Nevertheless, this development should give food for thought because it highlights the existence of factors in Germany which make entering the job market increasingly difficult for young people.

Contrary to this trend, the unemployment rate of foreign young people has recently been increasing in Germany or Austria. A contributing factor to this trend was the arrival of young migrants and refugees in these countries in recent years.

Within the last few years in particular, we observe a sharp reduction of youth unemployment in Europe – measured both in terms of youth unemployment rate and population rates. However, the dynamic differs across European countries. In most recent years, even countries severely affected by the Great Recession, like Ireland or the Baltic States, have improved remarkably, whilst other countries like the Mediterranean countries have improved, but still report high unemployment rates, especially youth unemployment rates. By contrast, we still observe long durations of individual unemployment, even if the overall duration of unemployment in the youth age group has reduced significantly in recent years. Additionally, we have to take processes into account which are more or less unrelated to the Great Recession. The dramatic increase of international migration and the arrival of refugees in European countries, where young people are highly overrepresented, indicate a new perspective on the European youth unemployment debate. These young people will require access both to education and to the labour market. The prevention and reduction of long-term unemployment and the integration of young migrants will shape European and country specific politics in the coming years, and require appropriate measures for tackling them.

Dietrich, Hans (2018): European youth unemployment in the aftermath of the Great Recession, In: IAB-Forum 2nd of July 2018, https://www.iab-forum.de/en/european-youth-unemployment-in-the-aftermath-of-the-great-recession/, Retrieved: 21st of May 2022