Like collective bargaining coverage, codetermination is becoming less and less significant in German companies. Only a minority of employees, especially in East Germany, work in companies with a works council.

The German system of labour relations is sustained by the statutory provisions on collective bargaining autonomy (regarding the prevalence of collective bargaining agreements, see also the contribution “Binding collective agreements: the downward trend continues” by Susanne Kohaut in this magazine) and on workforce representation by works councils. At company level, the Works Constitution Act governs the institutionalized representation of employees’ interests.

Formally, there is a clear functional segregation between codetermination at the sectoral (collective bargaining) and the company level. Practice shows, however, that the two levels frequently interact and that mutual dependencies exist. The works councils, for instance, are responsible for implementing and monitoring collective agreements that were negotiated by trade unions and employer representatives.

The IAB Establishment Panel furnishes data on the prevalence of both collective agreements and works councils. Since 1993 for West Germany and since 1996 for East Germany, this survey provides information on the existence of works councils. The results are representative for the roundabout 1.2 million establishments in the private sector (see info box “Scope of the Works Constitution Act”). A total of roughly 31 million people are currently employed by these companies.

The data of the IAB Establishment panel clearly show: The prevalence of works councils is declining. The share of companies with a works council (this covers only companies with at least 5 employees as only those are eligible for electing a works council) has been steadily diminishing since the early 2000s – after mixed developments until then. While in the year 2000, this share was still over 12 per cent in both east and west, it dwindled to barely 9 per cent by 2017 – albeit with some fluctuations. The overall low values are characterised by the large number of small companies in which the existence of a works council is rather the exception than the rule (see below).

In order to get a meaningful picture of the (dwindling) coverage of workplace codetermination, attention should be directed to the proportion of employees who benefit from codetermination. This share, too, has declined in the west since the mid-nineties from 51 to 40 per cent today, in the east from 43 to 33 per cent (see Fig. 1). 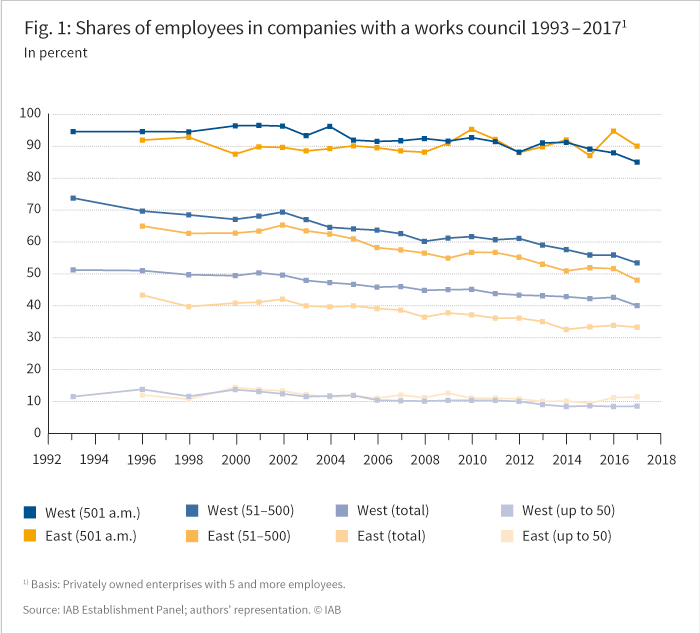 When reforming the Works Constitution Act in 2001, the legislator had in mind, inter alia, to stop the erosion process in codetermination and to encourage the formation of works council committees, especially in small businesses, by cutting the red tape on the electoral law.

These expectations have not been fulfilled – on the contrary. The share of employees in companies with between 5 and 50 employees (bottom 2 rows in Fig. 1) who have a works council, decreased between 2000 and 2017 from 14 to 9 per cent in West Germany, and from 14 to 11 per cent in East Germany. So, from an already very low level, it dropped again considerably. In the overall picture, however, this plays only a minor role since the number of employees concerned is comparatively low.

Now as before, all seems relatively well in the world of codetermination in large companies with a staff of over 500. The proportions there over many years amounted to over 90 per cent. It was only in recent years that the proportion in West Germany dropped to about 85 per cent (see Fig. 1, upper rows). There can be no talk (yet) of a comprehensive erosion, at least not in a quantitative respect.

What deserves increased attention is the development in companies with between 51 and 500 employees (middle rows in Fig. 1). The proportions there dropped, between 2000 and 2017, from some 67 to over 53 per cent in the west and from 63 to. 48 per cent in the east – and thus more sharply than in the average of all employees. The decline of eleven, respectively ten, percentage points observed in the total values is primarily due to the development in this segment, where a works council is neither a matter of course nor an exception. It is obviously here in particular that workplace codetermination is losing ground. Another remarkable fact is that this trend runs largely parallel in both parts of the country and thus, there is no convergence discernible between East and West Germany.

A more positive picture arises when leaving aside small businesses

The figures for companies with a staff of more than 20 and more than 50 (see Table 1) give you an idea of the coverage of codetermination without the large mass of small(er) companies. It is often argued that the low coverage in the small business segment is not surprising since other (direct) forms of participation are possible there. The election of a works council or a representative would only be required here if the immediate, non-institutionalised (exchange) relations between employees and management typically prevailing there do not work (any more). 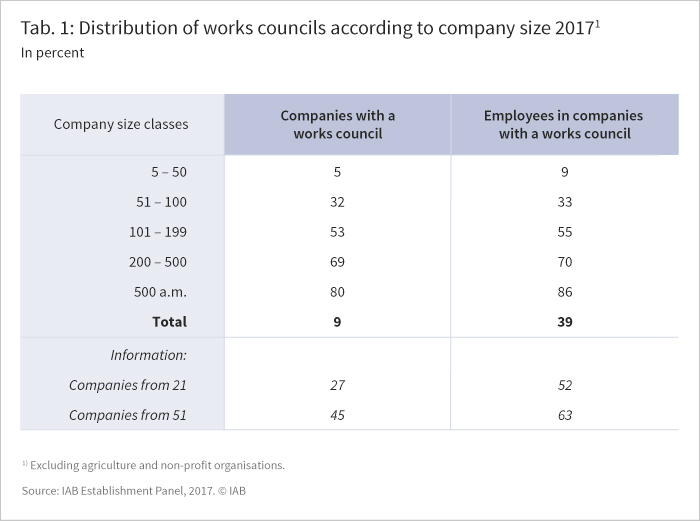 If small businesses are left unconsidered, there results a much more positive picture of workplace codetermination: 45 per cent of companies with more than 50 employees have a works council, with just under two thirds of employees (63 %) working in these companies. However, here too, considerable losses in coverage must be noted in the period under review. Since the turn of the millennium, the share of employees in companies of this size whose interests are represented by a works council has declined by 16 percentage points.

A closer look at West and East Germany also reveals that the considerable west-east differences still prevailing are a result of the low coverage of codetermination in companies with 101 to 500 employees in East Germany.

Considerable differences exist, depending on industries

There are also considerable differences from industry to industry. The biggest quantitative coverage of codetermination exists in the traditionally strongly co-determined sector “Energy and water supply / Waste management / Mining”, in “Financial and insurance services”, in the “Manufacturing industry” and in the field of “Healthcare / education and training”. The bottom end is made up of the mainly small-business industries of “Other service providers” (including the catering industry) and the construction industry.

Unfortunately, industry-specific developments can be pursued only over a relatively short period of time due to the conversion to a new classification of economic activities that took place in 2009. Easy to identify over the past eight years are declines in the areas of “Financial and insurance services”, “Transportation / warehousing”. This is also true for the areas of “Information and communication” in West Germany and “Healthcare / education and training” in East Germany.

The interplay of workplace codetermination and collective bargaining

Relevant literature has repeatedly alluded to the close meshing of the two formally independent institutions of the German federal systems of industrial relations – collective bargaining autonomy and codetermination – with their interdependencies and the resulting capability of cooperative conflict processing. The relation between collective bargaining and company regulation also remains virulent politically – not only in times of election campaigns.

Finally, the interplay of the two levels of the (legally legitimate) representation of interests shall be shown. There are, for example, companies that may be bound by collective agreements, but do not have a works council, but there are also companies that have neither one nor the other.

Only a minority of employees in the private sector (5 and more employees) work in companies belonging to the core zone of the dual system of interest representation. This means companies that have both a works council and are bound to industry-based collective bargaining. This zone covers only barely a quarter (24 %) of employees in West Germany and only just one seventh (14 %) in East Germany (see Table 2). 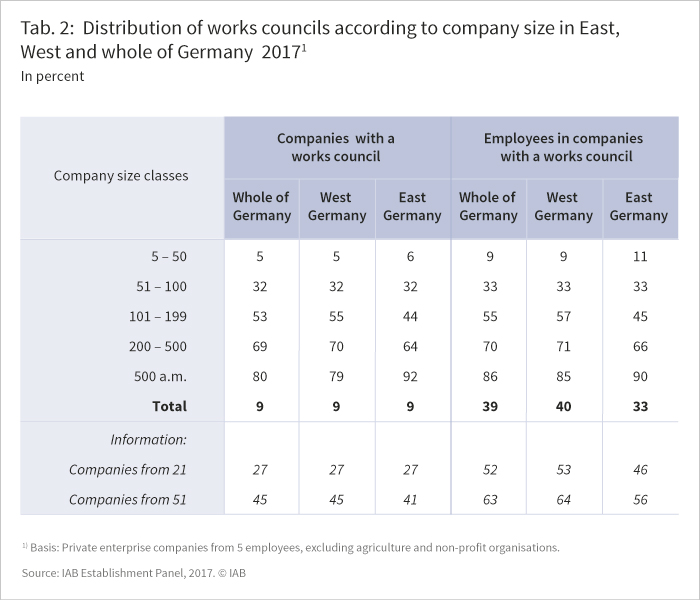 Gaps in institutionalised interest representation are bigger in East Germany

In West Germany the core zone of the dual system in the manufacturing industry covers a good four out of ten employees (41 %), thus extending far beyond the average of the private sector (see Table 3). In particular the construction industry with only every ninth employee, and the service sector with just over every fifth employee, clearly fall behind in comparison. 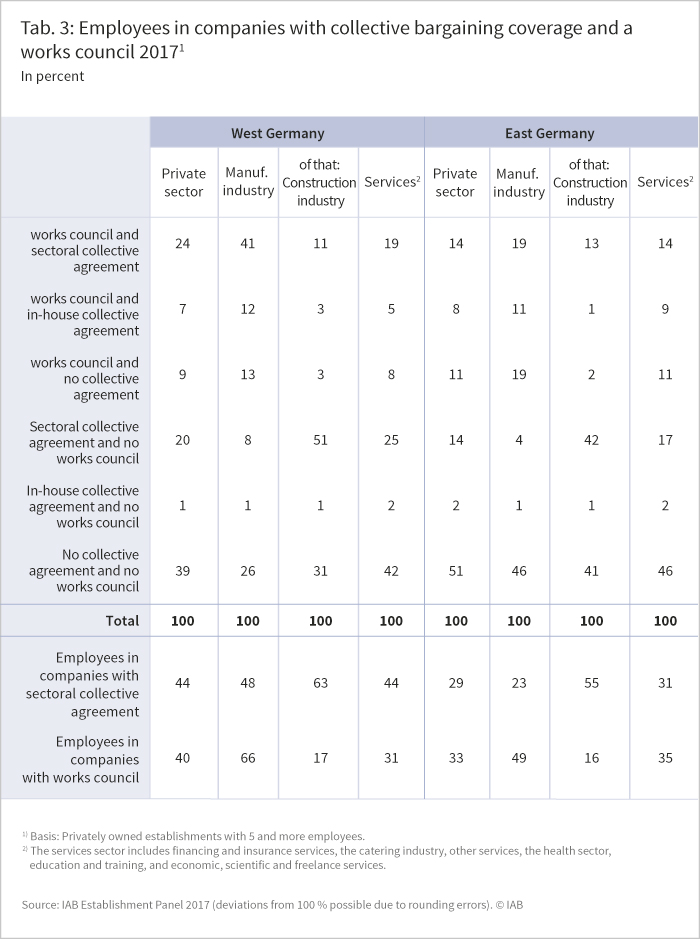 The plant level gaps in representation have taken on considerable proportions (51 %) in the construction trade, which is apparently primarily due to the general applicability rules prevailing there. The service sector, on the other hand, excels at ample “white spots” (42 %), where neither collective agreements nor a works council exist. In the manufacturing industry, this concerns only 26 per cent of the employees.

Codetermination in German companies has been on the retreat for some time now, with alternating phases of relative stability and further decline. An end to this development does not appear to be in sight at present. Moreover, there are no signs of a harmonisation between East and West Germany. The overall view shows a picture of erosion on both levels of institutionalised representation of interests, i.e. codetermination and binding collective agreements. Consequently, only a minor portion of employees meanwhile work in companies of the core zone of the German dual system.

The question arises as to what extent these developments are a side product of the structural changes in the company landscape, in particular of the growing service sector. However, research on codetermination shows that those factors can only explain a small share of the decline.

Scope of the Works Constitution Act

The exclusion of companies with less than 5 employees is a result of the legal situation which permits the election of a works council only from this company size on. This means that some 38 per cent of the companies in the private sector in the west, and 43 per cent in the east, are intrinsically without a legally legitimate representation of employees’ interests. The situation, however, is less dramatic if we change from a company to an employee perspective and have a look at the corresponding proportions. The fact that only a relatively small portion of the total number of employees work in the large number of microenterprises, results in a share of employees of 6 per cent in the west, and 9 per cent in the east, who on legal grounds remain without a works council.